The main objective of JJP GNR is to collect your seven band members and start a song. Certain shots on the playfield correspond to the different members. Once a member has been collected, a ball can be locked by shooting the left ramp. Collect all seven band members, then shoot the center scoop to start a song.

Collect each band member by shooting their corresponding shot on the playfield a certain number of times.

Each band member is represented in the revolver inserts in the middle of the playfield just above the flippers. When the band member inserts turn from flashing to solid, you have qualified them.

After a band member has been collected, a ball can be locked either at the lock shot (LE) or by shooting the left ramp twice (Pro). Locking all 6 balls will start the currently selected song automatically, so be careful. The number of locked balls increases your song’s starting value and increases the song ball save time.

When a song is qualified, the corresponding Album insert will be lit white and the name of the song will display on the playfield LCD. The song can be changed by hitting one of the 4 album standup targets next to the ramps (from left to right: Appetite for Destruction, Use Your Illusion I, Use Your Illusion II, Chinese Democracy). The player also has the ability to change the song by hitting the action button right before the song starts. If the song is manually chosen this way, you will lose 15 from the song level, so take what the game gives you if you’re hoping to score big points. Once a song is played, it can’t be replayed.

Starting a Booster Multiball can make it easier to collect band members, lock balls, and advance towards starting the song; and will also advance the song level if you do well enough.

Each song has several stages that are completed by hitting lit shots or a certain number of switch hits. Once the stage is complete, the center scoop flashes green / white. You must hit the center scoop to progress to the next stage of the song; while in Multiball play, doing this will add-a-ball and move on to the next stage. The song progress and lit shots are indicated on the playfield LCD. As you progress through the stages of the song, the song jackpot increases.

In single ball play, hitting the scoop when the stage is complete presents a choice to the player: Take the Song Jackpot and stop the song (action button), or continue to the next stage of the song and add a ball. When you continue, there is no additional ball save, so be careful. Each stage of the song exponentially increases the value of the song’s scoring and the song jackpot.

The scoring for each song is impacted by the Song Level, which is determined during single-ball play. The Song Level for each Song starts at 10 and seemingly has no limit. The Song Level resets to 10 once the player ends a song without collecting Encore.

There are various ways to increase the Song Level:

The Rock-It Meter discourages controlled play, but can lead to even higher Applause Jackpots if the player maintains it. As you make the lit shots during a song, the Rock-It Meter increases; it decreases if the player fails to make lit shots, and decreases very quickly if they cradle a ball. If the meter reaches zero, the crowd will boo you off stage and the song will end early, returning to standard single-ball play.

If you complete a song with the Rock-It Meter full, an Encore is awarded, and the next song in the current album will play with the Song Level, scoring, and balls that were locked before the first song carrying over to the next song. You do NOT need to earn an Applause Jackpot to get an Encore, and multiple Encores can be collected in a row.

If multiball is active during a song, the player can re-lock balls on the upper playfield to collect bonus points. Once each ball has been locked, a 20-sec timer starts to lock another ball. The Power Chord values are as follows:

A successful Power Chord will add a ball into play and release all the locked balls back into play. If you lock every ball but one in the guitar, and drain the ball in play, you’ll get a small award for the locked ones 10k per ball locked 50k) and they will be released. You cannot score the same power chord twice in the same song.

Inserts corresponding to certain band members are lit at different points during each song. Shooting the corresponding band member’s shot will boost the band member and increase the Rock-It Meter. Repeating this process for every member will start a Band Frenzy that increases the Song Jackpot for every switch hit.

This album has the highest number of songs. Some are fairly difficult to make progress in but others can be high-scoring. (It’s So Easy and Mr. Brownstone are removed on family settings.)

Use Your Illusion I

Less songs than Appetite for Destruction but they have a mix of lengths, ranging from just about 3 minutes to over 10 minutes. (Double Talkin’ Jive is disabled on family settings.)

Use Your Illusion II

Just three songs, but two are on the long side.

Another three song album, but this one is generally more manageable as both songs are around 4 to 6 minutes in length. The first two songs are fairly easy to get a Band Frenzy during.

Time spent playing songs helps qualify the respective Album Mode for each album. 3:00 worth of songs from an album being played is the bare minimum required to qualify the the Album Mode (and a silver record). Gold and Platinum Albums can be earned by playing more songs from the same albums, and increase scoring during the Album Modes. All Album Modes have completion bonuses based on how quickly they are completed.

The four Album Modes are:

Collect Patches by spelling G-N-R on the left inlane, or by draining from the upper playfield on the LE. Each patch has its own benefit(s), and can be selected at any time until collected by pressing the action button; once you leave it on a patch, you will always be going for that patch until you collect it. You can also hold the left flipper and hit the action button to go back if you skip a patch. The patch benefit is displayed in the playfield LCD. All three inlanes can be cycled to move the GNR letters over.

Patch Sets are sets of like patches that can have even greater benefits.

Shoot the GNR Logos around the playfield to spell GUNS N ROSES. Once spelled, Mystery is lit at the center scoop. Mystery awards can be earned during Song Modes as well. The Mystery Awards can be very valuable, including:

Cities / On the Road

Shooting the loops (left / right and inner upper flipper) will collect cities. The cities are indicated with the small inserts on the map in the center of the playfield. Hitting a certain number of cities starts On the Road a 20(?) second timed mode where the loops (orbits) are lit. During On the Road, you can discover band member “power ups”. Once all 53 cities are visited, you qualify Tour Multiball.

Two ball Multiball. Stand up targets on either side of both ramps will add-a-ball. Hit the loops to light jackpots and super jackpots. As of 1.08, this does not seem to be complete .

Earn Coma ball save by hitting the Coma target multiple times. This lights Coma as the left outlane. When Coma starts, hit 100 switches to empty the IV bag. Once empty, two shots are lit. Hit those two shots to start Coma Multiball.
You have 40 seconds to complete.

Hit the lit shots for jackpots

Not in this Lifetime Wizard Mode

Haha, I hoped you of all people would appreciate it.

This post is now a wiki for people to start.

Edit 2: I guess it deleted it because it was the entire previous post at the time. 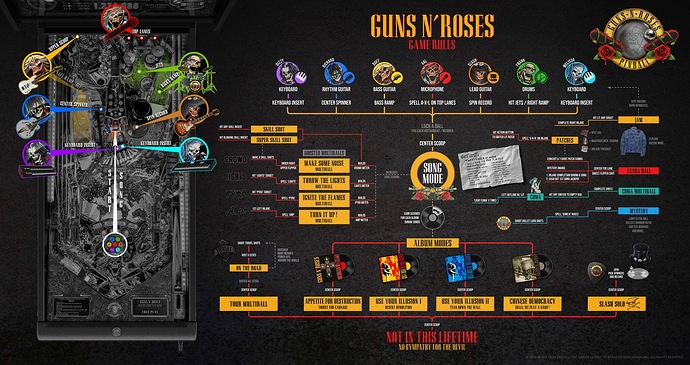 Added a bunch of stuff to the wiki. Debating to put the Patch Sets. Thoughts on spoilers?

Thanks for all the info, Eric!
Maybe put spoilers in, but with a “spoiler alert” in bold above them and some space below the alerts so nobody accidentally glances at some secret they don’t want to?

Added Patches, Patch Sets and Patch Strategy. I’d love to hear some approaches to patches. I’ll generally always be going for a patch unless I am on ball 3 and have something valuable built up to go for.

Also, would like someone to verify how Band Frenzy and Tour Items work. Not 100% sure I captured it correctly. Maybe @keefer can chime in?

Hoping that someone local here grabs one soon, so I can play this pin.

One SE in Austin according to Pinside. Maybe send Dave a message if you know him?

Yes - any figured out the best patches yet?

The final Wizard Mode was posted in a Youtube Video a few days ago.

Just wondering why there is a penalty for a player choosing their own song?

. I’ve lost a few balls trying to get to November Rain when I have 5 balls locked and am wanting to start it on the sixth. I enjoy the rule personally. Found some new Guns and Roses songs on Chinese Democracy that are pretty good!

It’s not so much a penalty as it is a bonus for not choosing your own.

Also, you CAN “choose” your song by hitting the ramp targets.

incredible game, have to say. Now to give ACDC/MET/Kiss/As a good run over

@keefer would I be breaking your balls if I gave a bit of feedback?

As long as you can take it in return.

I’ve been playing pinball since childhood, and my feedback is that Guns ‘n Roses is the best game I have EVER played. It’s an extraordinary experience to play it, every single time, for a lot of reasons.

Super game btw, cant stop playing it. Not sure if it has been mentioned elsewhere but I am finding the mini wizard modes, Slash, TDTW, SWPaG etc seems to score too low. I am aware that you can boost prior to increase the scoring but for the most part I am getting like 2-3 mill in Slash and similar in TDTW… Along with the low scores I am also finding that it is not really worth the risk to complete these modes in single ball play. You can get upto 100 mill in a song and more often than not 10 mill + most times risk free, so why risk playing a mini wiz mode in single ball play? Hmmm maybe have mini wiz modes as 2 ball multiball? If not would it be possible to increase the scoring? Like have them score around 50 mill for completion like in Slash rather than 2-3 mill?