So I’ve been working on a side project for a while now and I think version 1.0 is ready for a try. @kdeangelo was nice enough to share with me all the SQL databases from all the tournaments his software has hosted over the past 5+ years. From this raw data, I was able to “reconstitute” many of the tournaments and build a large group of static HTML pages with lots of links to tie them all together. Starting at the main page, you can visit the final standings for 167 different tournaments. There are also 500+ Player Pages where you can visit all the tournaments a particular player has played in. Cool.

A few notes on this first iteration:

Wonderful and Amazing. I would love to get involved in helping with this.

The screen below is from a MatchPlay event, but I’ve used similar code against NeverDrains. 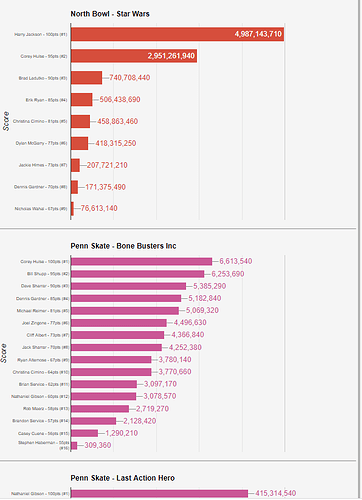 May I ask what the Tech stack is underneath? Do you have all these things in a single MySQL database?

Nice to see the evolution of this abandoned Wiki! Current and Historical Qualifying database

@Adam this is fantastic! It’s been such a bummer to not have all this data available for older tournaments.

The Match Play Events database had at least 10 variations on “Addams Family”. I don’t know what it is about that particular machine that’s so hard to deal with

Like Corey mentions, getting OPDB ids attached is one way to query consistently across tournaments.

@coreyhulse I’m currently reworking Best Game for the next version of Match Play. I’m trying to include more data directly in the Match Play UI. Here’s a little sneak peek of details for a single arena in a tournament: 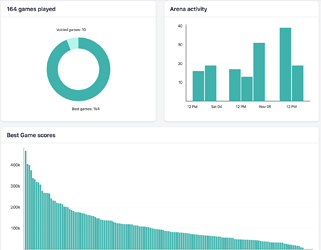 I totally forgot about that thread, Zach, lol, but I’ve definitely been thinking about this ever since tournaments started to “disappear” from Neverdrains because of Karl’s 50 database limit. Karl can always spin them back up, but The Man has enough to do!, so I’m just trying to help him out.

Good catch, Ray. 2015 is missing because the tournament name was “2105 Northwest…” and I only went through “A” to “Z” for outputting the names (doh!), so I’ll add that one back in. Starting in 2017, you guys went to the ticket-style qualifying (Early adopters!), so 2017-1019 will turn up on my next update when I include all the PAPA-style tourneys.

This is the Internet Archive’s Wayback machine for Neverdrains tournaments. I love it!

Good catch, Ray. 2015 is missing because the tournament name was “2105 Northwest…” and I only went through “A” to “Z” for outputting the names (doh!), so I’ll add that one back in. Starting in 2017, you guys went to the ticket-style qualifying (Early adopters!), so 2017-1019 will turn up on my next update when I include all the PAPA-style tourneys.

2016! good time, the Lefkoff and Jim came to visit

Wow one year goes by without NWPC and I already forgot the format. Classics has always been classic HERB though right?

Yep. It looks like Classic was still HERB-Style - Not many examples where some of the tournaments are ticket-style and other ones are HERB, lol. That’s gonna be a little trickier. Thanks a lot, NWPC!

Love this! thank you Adam - I’m often looking at the DTM data off the neverdrains website.

We also used Drains for a few events in the UK (3) but understand why you wouldn’t include that.

Very cool! Thanks for putting this together. What happened to the 2019 O-Town Throwdown? I ran that tournament, so I know it used DTM.

Minor thing, but I noticed on the player pages it doesn’t take into account whether a finish ends in a 1, 2, or 3, so you get things like “Qualified 22th”.

I look forward to exploring this data!

Minor thing, but I noticed on the player pages it doesn’t take into account whether a finish ends in a 1, 2, or 3, so you get things like “Qualified 22th”.

Yep. I have the databases for yegpin 2016 - 2019, but their names started with a year, so they missed out on my first pass. I will update soon, but I have them as “Edmonton Pinball and Arcade Expo 2016-2019”. Note that you went to a ticket-style qualifying for 2019, so that will show up when the other PAPA-qualifying tournaments get done next.

Thanks for the feedback, I’ll fix em as you find em.

I believe from 2015 - 2019 - It was same format pump and dump for main tournament and classics (ticket format).

We had other side tournaments that were card based thou, in 2019 like Pinball Pro and Women’s event.

The link for PPO 2015 Main isn’t working. Possibly damaged by a flying chair?

The following year the chair kick / dance was on loop for an entire day on one of the monitors. It was surreal.

card style for Classic is one level up of difficulties and need to have bulletproof machines compare to modern/open.
We have kept one of each so our small tournament can provide a taste of both or the players.

Thanks Adam. This is amazing! I was always sad when another tournament disappeared from the site.