Oh boy, this should be a fun listen…

It’s weird, I kept thinking “Not like this!” the whole time we were recording.

Thanks for checking it out and I’m glad you enjoyed it!

one thing I was wondering, on the 4.6% of women in the 45k registered players.

I would assume most of the “casual” players registered do not update their IFPA profile with their gender. Does the default entry of all new player as a “N/A” for gender hence fudging the numbers?

Would the true percentage should be based on total amount of player with gender status updated? As it shows for top 5k, where more people cares and update their profile info, the ratio of women was higher (still pretty low but a little better)

You said IFF-PUH and it was weird.

My IFPA profile has always had me listed as female without me specifying my gender. They assumed by gender! triggered!

When we first created the Women’s filter, I know Brian auto changed anyone that had a ‘common’ female name, just to get things going.

I believe all new profiles now default to male unless we’re told otherwise via a profile update.

so likely to somehow under represent casual women player that does not update profile?

Shows female percentage at 9.98%, so it could be based just on those that have updated their profile one way or the other, with the rest defaulted as ‘nothing’.

I remember hearing it pronounced in a manner different than “typical” when I heard Dan Carlin’s Hardcore History podcast run on the Mongol Empire (cleverly titled Wrath of the Khans). Though I don’t recall if his pronunciation was the same as demonstrated on SSP.

Bottom line, I guess there’s more than one way. /shrug

Hey guys,
Sorry I don’t chime in on this forum very much anymore. I miss it, I’m just busy.

Just wanted to stop in to let you all know that our release schedule is going to be a little wonky for a bit. On NYE Graham slipped on a slick part of the sidewalk and broke his ankle. He doesn’t read Tilt Forums, so if you want to send him some posi, get well soon thoughts, you can do so at skillshotpincast@gmail.com.

Thanks for your patience!
xo,
Kayla

Around 26m in, did you say Fil Baird?

Edit: It seems you did. Just looked him up and saw that he’s into pinball. I lived with him while I was in college (santa barbara - around 2000-2001) and he was working at Ebullition. I brought my Paragon into that house - though it was pretty broken so we didn’t play it much. Awesome that he’s into pinball! Tell him Ryan says hi.

'nother edit: The Santa Monica Pier arcade must have listened to your podcast. I just got this: https://twitter.com/playland_arcade/status/836309679206608896

I did say Fil Baird! He’s so wonderful and it’s cool to hear from someone else who knows him. We are also literal Pin Pals who send each other postcards about our pinball endeavors. After Pinburgh last year he let me stay at his place for a week and took me to all the best spots. Here’s us before I got on my flight home.

I’ll let him know you said hi for sure. 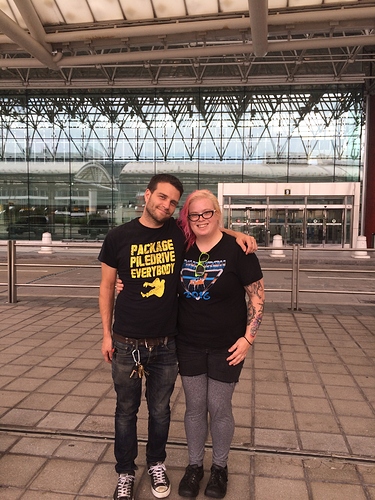 Awesome! He still looks the same! And knowing him, those are probably the same shoes and pants he was wearing in 2001.

I’ll try to get in touch with him, too. Guessing he doesn’t use his @totaldeath.com email anymore. Small world.

I can’t tell if you’re being sincere or snarky, so I’m just gonna assume this means you enjoyed it. And in that case, thanks!

Haha, to be totally honest, I made my sincere comment after only about half the podcast. There was definitely plenty of local stuff afterwards! Don’t worry, we can take it.