Not to be confused with the rulesheet thread. 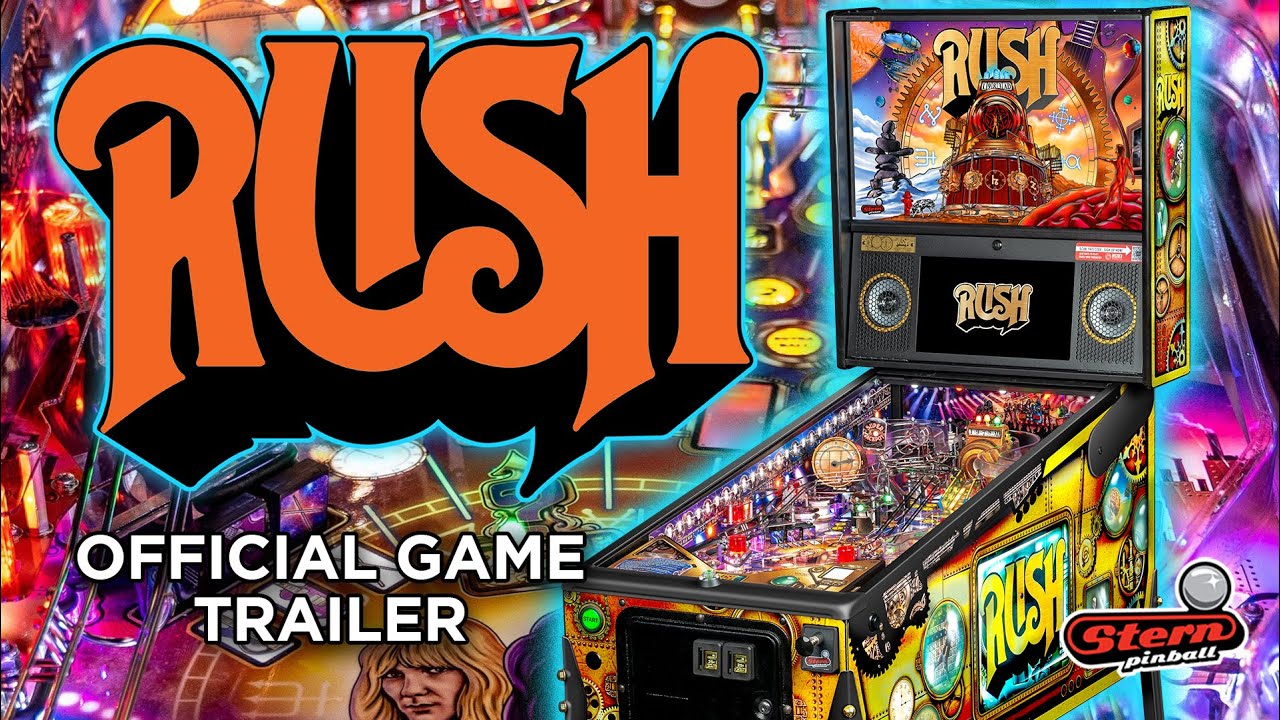 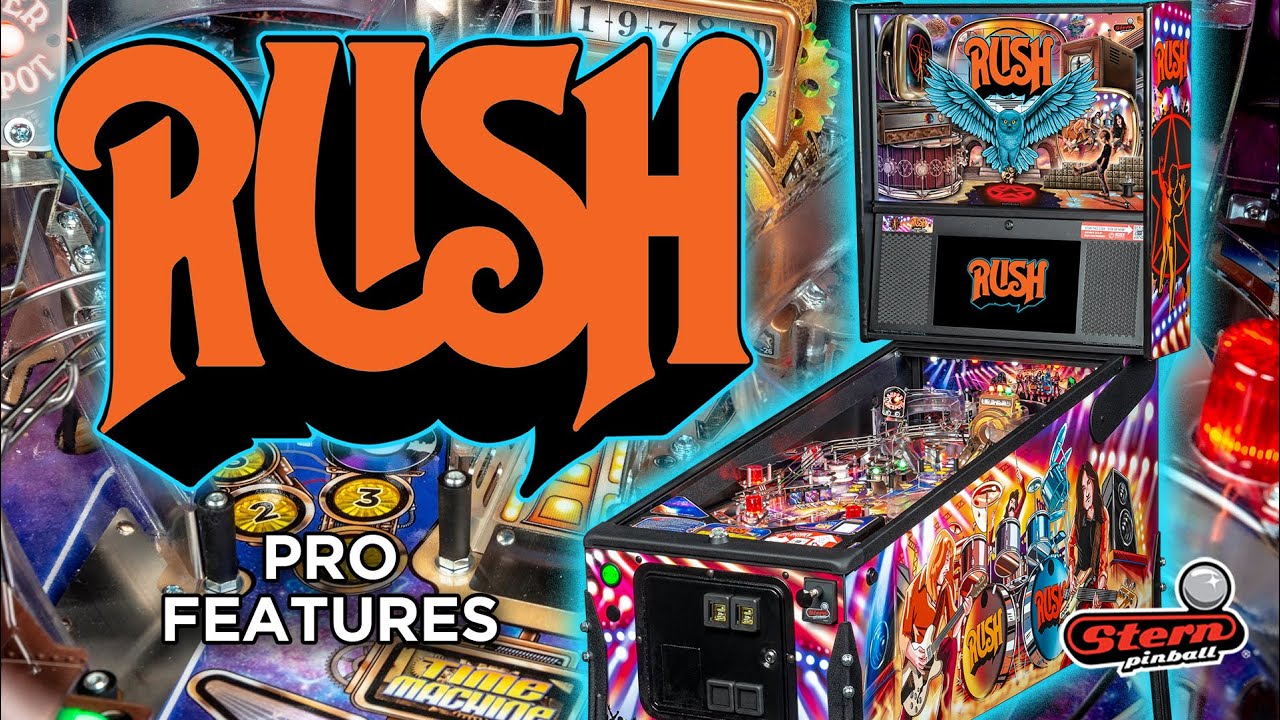 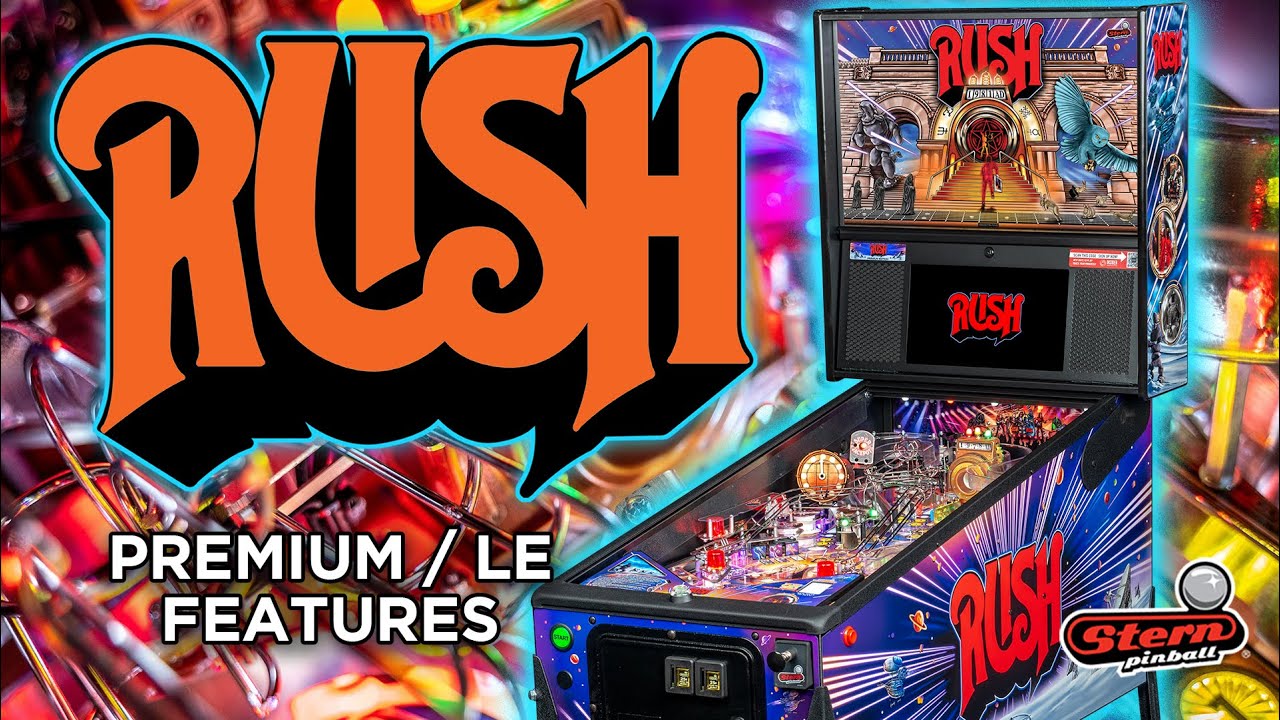 Stern unveiled Borg’s newest game today, as you likely know by now. It looks interesting - to me, a lot of its features are more utilitarian than something like Godzilla’s toys, which isn’t necessarily a bad thing. It seems less empty than Led Zeppelin Pro, at least, which is always good! I figure this will likely end up coming down to the coding and ruleset.

Also, I’m a little stunned at the sheer amount of Rush references in the artwork - each of the three backglasses alone incorporates a minimum of five allusions to their previous albums’ covers. I don’t mean to keep digging on Zeppelin but the difference is pretty stark. It certainly makes this seem much more like a passion project, which is rarely a bad sign. Another big reason why I get this impression is because every living band member provided callouts for it - and seemed to have a good time doing so, if this is any indication: 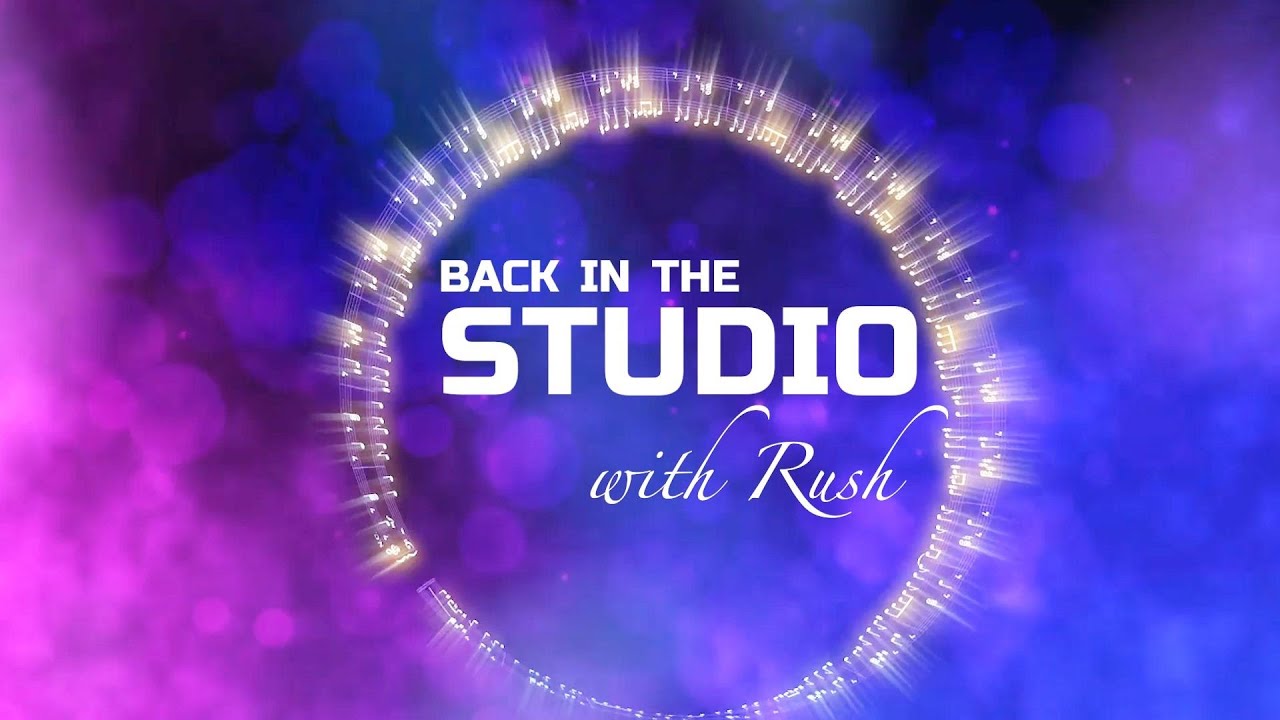 snuck in a little of the prem/le at 2:32 in the pro video lol

Led Zeppelin seemed like it was a bit of a mess to produce; Steve Ritchie originally had big plans for the game, but things didn’t quite work out the way he wanted them to. The surviving members of the band felt they didn’t need to record audio - they still felt pinball machines were what they were in the 60s / 70s - and things kinda spiraled downhill from there. Would love to see his original vision for the game someday. I respect LZ as a testing ground for Tim Sexton’s coding abilities but it’s definitely not my favorite, though I know plenty of people who like that game.

My dad really likes Rush as a band while I know nothing about them, but from what I’ve gathered, some of their tracks are awesome and they’re well known for not taking themselves remotely seriously, which I have to admire. The layout is solid - takes elements from previous Borg games but that’s kinda his style - and judging by the Insider podcast excerpt, this game might be more on the long playing side compared to stuff like Aerosmith (screw those pop bumpers with a passion).

As a huge lifelong Rush fan I am really looking forward to the game. I agree with @JamOn that the game seems to be filled with lots of fan-centric references, and I loved that video of them in the studio. They honestly seemed to be having fun with the project and goofing off each other. Layout looks fun, just have to see how the code comes out and how it plays. Haven’t been this excited for a game in a while.

I’m getting Pro pinball Fantastic Journey vibes from the reveal… wonder if that game was used for any inspiration here? Looking forward to trying it out. 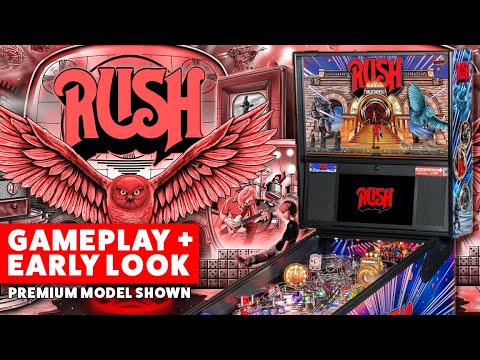 I have to commend Tim Sexton & Raymond Davidson on making a game that’s easy to understand, but hard to master - like the best pinball machines are. “Collect records to light modes” is a simple start, and the complexity comes in with getting shots lit for 2x / 3x or choosing when to strategically start modes. Can’t wait to see how the code evolves over time.

Here’s some tidbits from the two podcast episodes Stern put out on Insider Connected about the game. I imagine some people here might already know a few of these (especially since they’ve been out for a while now), but I like having them all in one place and there’s several that are new to me, at the very least.

Thanks for distilling all that info. Some great tidbits in there! And now I know who to blame for the absence of YYZ and the Hoot Again pun. Those are my only gripes with the game from what I’ve seen though. From my perspective as both a big fan of the band and obviously as a competitive player it looks incredible all around!

Geddy wanted “YYZ” in, while Ed argued that “La Villa Strangiato” was a better instrumental with catchier hooks

Geddy was right here, “YYZ” is so much more iconic and well known.

Kenny Luong, the engineer for the session, had some connections and managed to get in touch with Terry Brown (the producer of several Rush records, including 2112), who sent him the exact signal chain he used to filter Neil’s voice on that album.

This is so rad.

Thank you @JamOn for posting that. Since I couldn’t/didn’t get to listen to those podcasts, this was a great read!

I was a huge Rush fan in the 80’s and 90’s. I got to see the Moving Pictures tour from the 3rd row in 1981. I will be leaning towards buying this game NIB but I have to play it first. 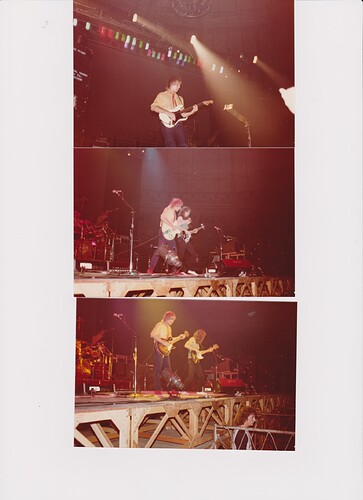 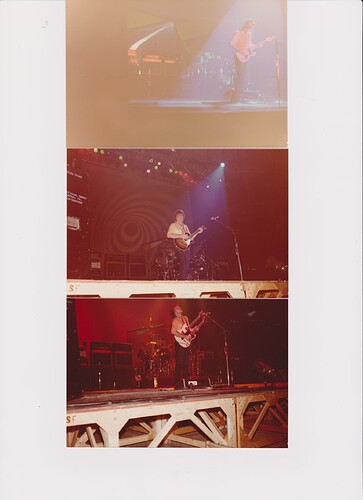 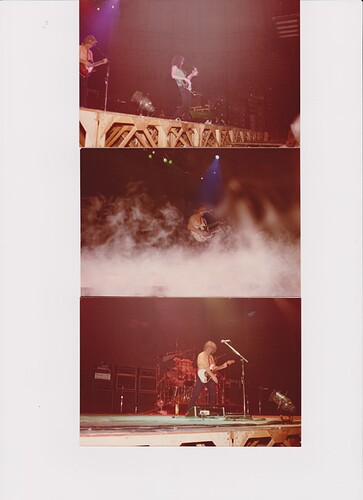 Thanks for distilling all that info. Some great tidbits in there! And now I know who to blame for the absence of YYZ and the Hoot Again pun. Those are my only gripes with the game from what I’ve seen though. From my perspective as both a big fan of the band and obviously as a competitive player it looks incredible all around!

Thank you @JamOn for posting that. Since I couldn’t/didn’t get to listen to those podcasts, this was a great read!

Thank you all in turn for the kind words! I’m not much of a podcast person myself and generally prefer written information when it comes to disseminating pinball news, so I certainly understand the desire for short summaries. (This is why I’m very grateful that Stern provides transcripts of these episodes, even if they’re not perfect.)

Also, it’s funny - the day after I belatedly post about these two podcast episodes, Stern announces that the Pro version is in full production and uploads another episode about Rush. This one has host Nate Shivers talking with John Borg about the game “post-release.” (I’m not sure if it’s really “released” yet, since I don’t think anyone’s gotten it in their homes or on location just yet, but that’s mere semantics.) 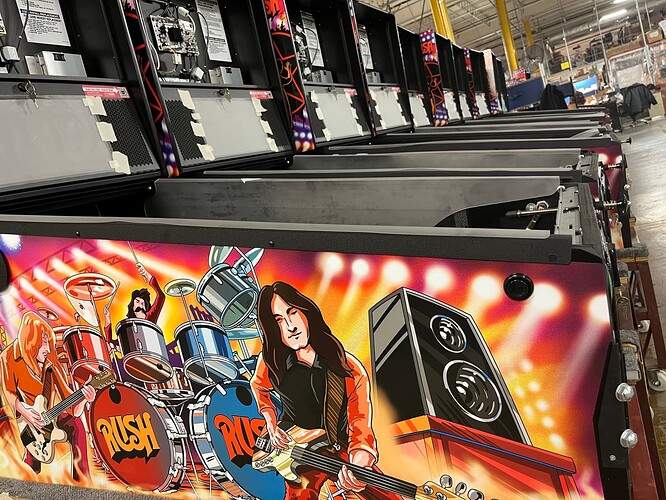 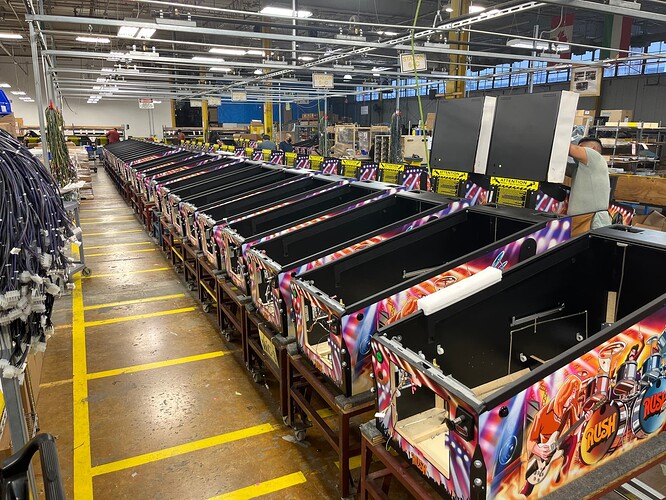 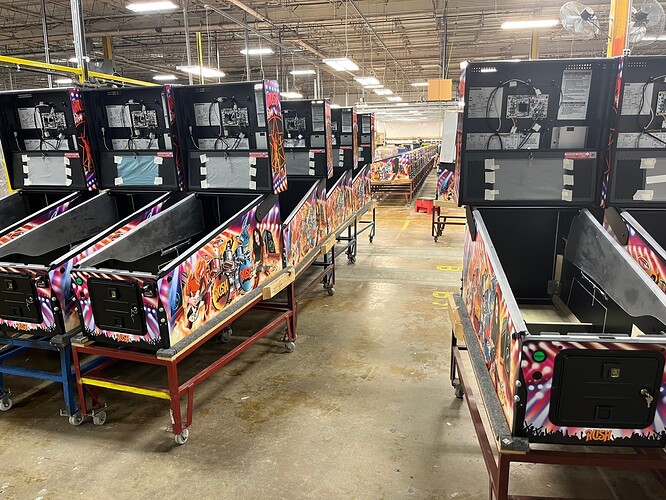 1/20 EDIT: Logan Arcade has what appears to be the first publicly-available machine on-site: 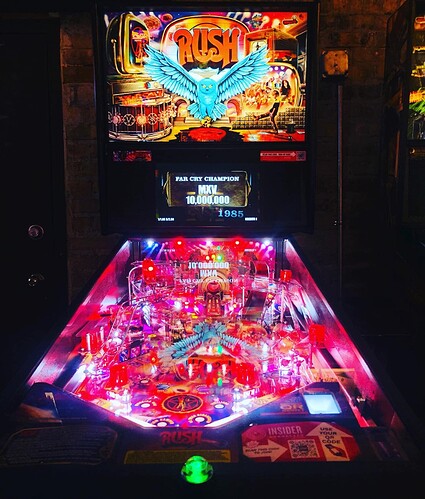 In case y’all missed it, LoserKid podcast did an episode with Tim and I! Not sure how to find the link but uh, ya know, podcatcher thingy do the search etc

Some general thoughts on Rush. I played it for the first time today and wanted to provide some feedback in regards to the code. Tim Sexton & Raymond Davidson both did an excellent job at coding an accessible game for newcomers that still manages to pull in the experienced crowd.

My complaints are all very minor though, and don’t diminish my opinions about the game. It’s a great game for what it is and I’m discovering a bunch of songs I really like, and isn’t that what the game is all about?

The spinner does not have a #3 light on it

The diverter works in advance and will always show you which flipper either ramp will divert to at all times via the pulsing flashers on the lower left and lower right of the playfield. Often times after you’ve hit, say, the left orbit for #1 the game will setup diverter to the right side because the side ramp has a #2, and if you hit that #2 you want the ball on your right flipper for the Dead End #3. This can always be overridden with the action button though.

Ha, this was totally unintentional (skill shot loop thing) but I like it too!

Not sure if you had a typo there as you contradicted “very high scoring” with “could use a buff”…
Once rulesheets are written you’ll probably find your scores going way higher in these multiballs. Freewill is also the multiball designed for the premium/LE meant to capture a ball and have you hit it to raise the base jackpot value. On the Pro I think you can still do that (or it may work a little differently) but it’s not made as obvious due to not having the ball physically locked.

Drum solo does make it easier to get to midnight. 2x Minutes during drum solo. Also 2x minutes when your drumsticks are active, meaning potentially 4x minutes per pop. And each pop can easily be 2-3 minutes depending on how much you’ve upgraded them

Perfect, thanks for the quick feedback! Things make quite a bit more sense now, can’t wait to see how this code evolves.

Played a Pro at a local bar. I really didn’t like it (mostly because of the layout and general feel of the shots), but I’m glad that great players like Tim and Raymond are handling the software; I’m eager to see how it evolves over time as well, and hopefully my opinion will change.

Wow… completely different review on my part. Also played at a local barcade where the noise was too high to hear callouts and music (only guessing that will probably end up being my favorite part). The shots felt buttery smooth… as others have said, a mixup of Xmen and Tron, with a LOTR magnet shot thrown in for good measure. The flow and combos were my favorite part. We all like different things, but a hit in my book.

The volume on the machine was set to be just louder than the neighboring machines, but I’d like to get to experience the machine being able to hear the machine alone in all of it’s glory.

I’m going back later this week to play again!