American Pinball’s second game about a sprawling, historic festival with beer, games, and fun attractions! It’s a Joe Balcer design with programming work done by Josh Kugler and Joe Schober, art by Jeff Busch, and audio by Matt Kern. A shout-out to everyone at American Pinball who produced this game.

This rulesheet is a wiki; feel free to contribute!

A tour of the playfield, starting from the left flipper and working our way around clockwise:

There are four skill shots in Oktoberfest:

“Choose a stein! Lots of choices - each one has its own benefits!” ~ Otto

In single-ball play, shooting the Bar hole (either as a skill shot or after hitting the Bar doors enough times) lets you select a beer stein with the flippers.

Each stein does two things:

List of Steins (from top to bottom, left to right):

Complete “TENT” via the inlanes/outlanes to light a Tent Mode at the scoop. Scroll through the 13 modes available with the flippers; select one by hitting both.

With the exception of Juggling, which is a multiball, all Tent Modes run on a 46-second timer [?]. Each mode has a specific goal–usually making enough lit shots.

Completing a mode yields “confetti” effects on the display. However, you can keep making shots until the time expires. Otherwise, you can replay failed modes by spelling “TENT” and shooting the scoop again.

Every Tent Mode is associated with a beer stein. If you play a mode with its associated stein, all scoring is doubled. Furthermore, a stein can be collected up to two more times, which triple and finally quadruple mode scoring.

Complete all 13 Tent Modes for the “Flipper Miestro” wizard mode.

These modes give you calories which increase multiball scoring. The order you play them in is as follows:

Complete the PROST standup bank to light locks on the side ramp. Locking three balls starts Beer Barrel Multiball. (Locks are shared between players. Be careful!) Locks can also hold over between games.

During multiball, lit shots score jackpots. Locking a ball in the Beer Barrel holds it there for 20 seconds (configurable). While a ball is locked in the Beer Barrel, the next jackpot is scored at 2X, the next at 3X, and so on. Each lock shot and PROST bank completion resets the timer. PROST bank also relights all jackpots. Locking a second ball scores the Super Jackpot. Locking a third ball scores a Double Super Jackpot.

Spell OKTOBERFEST via the left and right standup banks to light locks. The left ramp will lower over the left loop; locking three balls in the Corkscrew lock starts multiball.

During multiball, lit shots score jackpots. Only a few will be lit and they will move around the playfield, starting on the left, and moving to the right. Spelling OKTOBER or FEST lights the left ramp for a super jackpot.

If you drain down to one ball without scoring a super jackpot, the left ramp briefly stays down for a “last chance” super.

Ducks collected throughout the game increase mode values and end-of-ball bonus. Earn ducks by one of the following:

Every 50 ducks lights Duck Derby at the Tent scoop; Tent Modes are unavailable until Duck Derby has ended.

Duck Derby is a two-ball multiball. Green shots score points based on your duck count, and advance your duck in the race. Hitting a duck standup target will “select” the corresponding duck, causing any lit shot to advance that duck. When your duck is selected, all shots are green; when an opponent duck is selected, all shots are red (and you should promptly shoot your duck’s green standup target to re-select your duck). Every few seconds, the furthest back opponent duck will advance, even if you didn’t make a red shot.

Win the race, and you start a Victory Lap phase that lasts until the end of the multiball. All duck targets and lit shots score. You can make the same shot multiple times. Lose the race, and the Derby ends: flippers will be disabled until at least one ball drains. A ball saver is provided until single ball play is re-established.

Hit all four ducks and shoot the Tent scoop to collect a Mystery award. Some awards include:

After enough pop bumper hits, hit the High Striker captive ball when the ball exits to the upper right flipper for a point award. The harder you hit the ball, the more points you get.

The bonus awarded at the end of each ball is held between balls and is comprised of:

Everything is then multiplied by the Bonus X.

Thanks for starting an Oktoberfest rulesheet!

[Coaster ramp] Missed shots are dangerous, given how steep this ramp is.

Missed shots here are not meant to be very dangerous. A missed Corkscrew/Coaster ramp shot on a properly leveled game should mostly return to the flippers. If that’s not true on your game, there’s probably either a left/right leveling issue, or the machine is significantly steeper than recommended. Of course sometimes weird stuff happens, because pinball.

You can collect the same stein multiple times [what’s the benefit?] . Additionally, every stein is associated with one of the 13 Tent Modes. If you start a Tent Mode with the appropriate stein, that mode’s scoring is doubled.

More specifically: Locking a ball in the Beer Barrel multiplies Beer Barrel Jackpots (only) for a limited time… first jackpot after a relock is 2X, next one is 3X, next one is 4X, and so on… you can lock another ball or complete PROST to reset the timer without resetting the jackpot multiplier.

Thank you for clarifying things! Love the stein mechanic.

Is it normal for the beer barrel ramp to be nearly impossible to clear? Should the upper flipper strength be increased? Does the ball need the momentum coming around the right orbit or should it be able to get up the ramp after getting shot from a MagNab? I only ask because for the one I play on location, I swear I’ve hit that ramp clean 50 times and it never makes it all the way. It used to be impossible to make it up the coaster ramp too, but I think they lowered the back legs a tiny bit. Now it feels much better.

Absolutely love this game, by the way. Had a blast playing it during league this week.

Perhaps that’s flipper strength-related. You should be able to make the side ramp with either a slowed ball (MagNab) or a moving one (coming around right orbit).

Mine shoots much like the Millions Plus ramp on Whirlwind. Definitely some rejects, but a good shot should make it. Certainly easier off a magnet grab.

I haven’t tried this myself — haven’t needed to — but I’m told that the ramp may be easier to shoot if you remove the two little screws by the mouth of the ramp… I guess doing so smooths the entry angle just a smidge?

I personally think it’d be neat if there was a little “combo” award if you made the left loop and then the side ramp after–even if the ramp isn’t lit for locks. Like the Loop-Turbo combo in Indianapolis 500.

Saw someone make the combo once on a recent stream.

Yeah or hell with how hard the shot is, any combo of the left orbit to beer barrel will get you a lock at all times.

These combos already exist, although they probably need more A/V fanfare that they’re being awarded:

Today I started Fud Frenzy with 2 Buschbrau Steins, and then immediately started the Roller Coaster Multiball. Mode bonus was 6 million and got the GC.

Edit, the game has not been updated with the new code.

Personally, I like gum rubber on the upper flipper, but that might just be me being old school. I hit that ramp pretty regularly, does take a bit of time to get the feel for it.

Removing or loosening the ramp screws a touch might help, the jury is still out on that.

Today I started Fud Frenzy with 2 Buschbrau Steins, and then immediately started the Roller Coaster Multiball. Mode bonus was 6 million

Niiiice. Sounds like you did that stack about as well as you possibly could.

Once you have a monster tent mode like that, it becomes pretty important to win other tent modes on the same ball, because the mode bonus is multiplied by the number of tents won on that ball. Of course, one becomes very wary of tilting at that point (and if you think you’re at risk, picking up a Thor’s Hammer Ale might be good insurance). Juggling and Target Shooting are good candidates for relatively easy wins.

Is there a way to “pass” on starting a Tent Mode (in case you want to collect more Steins, locks, and/or playfield multipliers first) or are you forced to choose a mode when you hit the scoop?

If not, maybe a “mode cancel” rule could add even more strategy. Perhaps you can opt-out of a mode with the MagNab button, but the catch would be that you’d have to spell TENT again.

Nope, you have to choose a tent mode to play.

Hadn’t realized that the initial post wasn’t Wikified … it should be now.

Same here man! Happy to see someone else from here besides myself is going, I’ll be there all weekend! Got an LE pass and everything!

Added some info about beer steins and their benefits, mode completion requirements, and the end of ball bonus.

@CaptainBZarre … you need a code update! 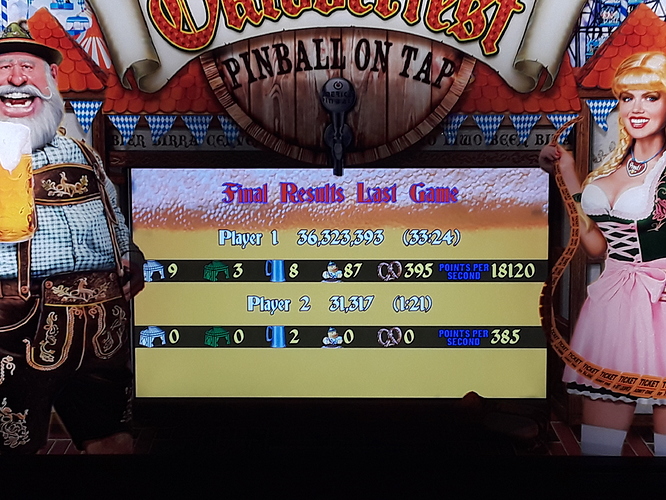 Had a solid game. From what I can tell, the steins for boosting multiball are super valuable–I had super jackpots worth millions. I had a super Beer Barrel jackpot worth over 10 million but missed it.

Sadly game crashed and I had balls remaining. The particular machine had an issue where all the inserts were solidly white, so I had to blindly shoot around to score points. But still fun. I personally like the strategy and will keep on playing!