Details:
Maximum of 64 players! Every player will receive 2 random spell cards at registration. In addition, each machine will have a set of goals to earn additional spell cards throughout the tournament. Other methods of earning spell cards TBA.

There are two phases to the tournament:

Phase 1: Match Play - Saturday 9/9, 10am-8pm
Players will be placed into groups of 4 (sometimes 3) to compete on a single, randomly selected machine. Points are awarded (3/2/1/0) and added to a running total for the tournament. The top 16 players at the end of the day will advance to finals.

Phase 2: Pinburgh-style Finals - Sunday 9/10, 10am
4 player groups, 4 game finals WITH spell cards (as applicable) still in play. 3/2/1/0 scoring. Top two from each group advance to the next round.

Will you save your cards for finals, or use them to get yourself into the finals?

Players that attend both Critical Hit and Pinball at the Lake will have their tournament player fee waived for 2018’s It Never Drains in Southern California.

Time for another Critical Hit! Modified a bit from last year’s tournament but sure to be another hit. More spell cards and a higher player cap this year with the move to 4 player groups. I’ve been told it’s the most fun tournament in SoCal

Maximum of 40 players! Email iepinball@gmail.com to register for the tournament.

Phase 1: Match Play / Earn Spell Cards - 10am-1pm
Placed into pseudo-random groups of 4 (sometimes 3) the top two players after each game will earn a spell card. Upon the conclusion of Phase 1, additional spell cards, if available, will be auctioned off with 100% of the proceeds going to the Pinball Outreach Project. Games and positions will too be randomly assigned during this phase.

Phase 2: 3-Strikes - 2pm
Placed into random groups via card draw of 4 (sometimes 3) the bottom two players after each game will receive a strike. In the case of a 3 player group, only the 3rd place player will receive a strike. Games and positions will be selected via D20 roll with a Critical Hit earning both game and position selections. Each player can only select each game ONCE for the entire tournament until all selections have been exhausted. Players are eliminated from the tournament once they receive 3 strikes.

Final spell cards for 2016 will be announced slowing running up to the tournament. Check here or the Facebook event page for cards as they’re released.

This sounds like a lot of fun! Very creative and I think would be a great way to get new players involved in the scene.

Final cards are off to the printers! 108 cards in play for this year’s tournament vs. 54 from last years. Hopefully they’re slightly more balanced this time around.

First three cards are returners from 2015:

Tournament is about 2/3rds full with a little over a month to the tournament. Maintaining a running player list on the Facebook event page.

Added a sidepot option involving a d60 and a lot of luck for those courageous enough to join.

Two weeks to go, 7 spots remaining. This will be broadcast on twitch.tv/iepinball if you want to watch the insanity. Follow the channel if you haven’t already to be notified when we go live. 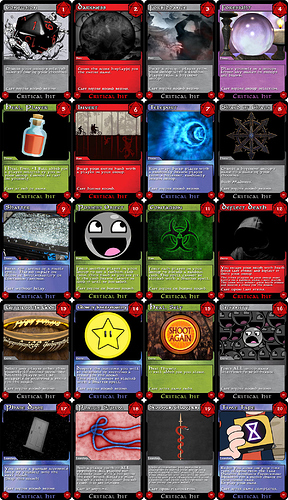 Also, I’m ordering additional decks for anyone interested in purchasing one/two/more…send me a PM. These are printed as actual cards, from a company specializing in just that.

This is such a cool concept, I wish it wasn’t on the literal other side of the continent so I could participate.

Good luck with it Karl!

Deck orders will be available until the end of Saturday, at which point I’ll be making the final order. Might grab a few extra just in case, but consider this the final call! $13/deck plus shipping, payment when they’re ready to ship.

Bumping this as I have decks ready and available! A few cards were tweaked, as can been seen on the order page. Go here to order

Should have the stream up on YouTube in the next few weeks. I’ve been working on editing it down a bit.

Next Critical Hit will be held September 9-10 at AYCE Gogi in Van Nuys, CA and will be the debut of the Match Play deck. Cards will be in play during PAPA-style finals

Yep, recommend a deck for every 20 players.

When will the Super Limited Edition deck be available with the Modica Plague card?

That card will be in the match play deck, although the name is up for debate as I don’t really want to inflate his ego anymore.

He is no longer Johnny “Sandbagger” Modica to me. New title: Johnny “Plaguebringer” Modica.

@PressStart ran a critical hit on the weekend and it was a great time. We were all new to the format, and I think things went relatively smoothly, but I think there are things that would help a new TD. Do you have a GM guide to franchising this, if not I can write some of my thoughts in a new wiki thread. I have some thoughts on recommended best practice for these things.

The things that stood out.

It was really fun, too bad turnout was low. Hoping it was mother’s day weekend issue, or a vengeance is scary thing and not a issue with understanding the format.

I don’t have a guide built yet as I suck at documentation. Should probably make an official “Critical Hit” thread here, or turn this one into it.

Documentation would be greatly appreciated. I’m happy to copyedit/sanity check if you throw something together.

Good point on the darkness thing.

Looking forward to receiving my decks and running a CH even in the next 3 months or so.

I just mean having a clear place for used cards is needed. Also, when each player is eliminated, making sure they return any unused cards. I just think the odds of someone forgetting a card in their pocket and taking it home goes up as number of players go up. Counting the discards to make sure their is the correct number was easy with 1 deck, more work with 4 decks.

The ones I remember that could use examples.

Foresight: I don’t even know if this is what you intended, but it was generally used to place yourself into the group of 3 (which was always group 3). That was not obvious to everyone at first.

I think Shatter, Global has issue, because many spells are cast that the player holding the card is not aware of. They might potentially want to counter a bootstrap paradox in another group, but not even know it was cast, or they might be playing at the time.

Couple other thoughts I am remembering now.

What is the rule if 2 people roll a critical hit (or any tie a guess)? It should be written down that the original order stands and they reroll to break the tie (of course maybe it was and I missed it).

How strict do you want to be about spell fizzling (sorry, I grew up playing magic in highschool). We were very lenient, basically, people could not cast at the wrong time outside of Possess Object.

I will draft what I think a TD guide should be in a doc and share it send it to you. If you think it is reasonable and matches your vision, it can be either turned into a Wiki or published as a link here.

I just mean having a clear place for used cards is needed.

Very hard to do indeed. I had counts for the number of cards each player earned, but that was thrown out when people started using their Invert cards. The other thing I did was give everyone a card box to conceal their cards in then had them hand that into me upon elimination.

Foresight: That’s basically the intent for that one, since I only give strikes for 3rd/4th place.
Possess Object: Good point as there are a lot of possibilities with this card. Examples would help.
Shatter, Global: True, there can be spells being cast the holder is unaware of but I don’t see a problem with it. If someone really wants to make sure someone doesn’t use a powerful card they need to pay attention to everyone. If they’re playing I’d say oh well.

What is the rule if 2 people roll a critical hit (or any tie a guess)? / How strict do you want to be about spell fizzling

Wanted to leave these up to the TDs but guidelines wouldn’t hurt. Logically in my mind the crits both re-roll, maintaining their original roll positions. For the breaking of spells (I assume that’s fizzling) I was fairly strict and required the counter to be cast as quickly as was reasonable.[quote=“gammagoat, post:18, topic:1966”]
I will draft what I think a TD guide should be in a doc and share it send it to you. If you think it is reasonable and matches your vision, it can be either turned into a Wiki or published as a link here.
[/quote]
That would be beyond amazing!

These are my rules that I ran by:

You can call a TD to verify two things: the current player up when the ball is in the shooter lane, and if the proper amount of players have been added at the start of a game. Everything else is up to you.