Here is the one from our 24 hour final battle. New name added each year. Will be announcing the date and opening registration for this years real soon.

Let me see if I can dig up some Photos of our NEPL trophies too. We have a great idea for this seasons. Hope we can execute it.

Here are some of the league ones. Inserts all light up

I like those backbox ones too. Mind sharing some info on those to use?

Here’s mine from 2014’s Critical Hit. I am unashamedly stealing the Garage Gauntlet sword trophy idea for 2015’s Critical Hit though

The GG trophy isn’t as custom as these other awesome trophies but, its probably easier and cheaper. I printed out the Atari Gauntlet font on sticker paper after I photochopped it. Then cut the lettering out after it was stuck to the sword. The sticker paper adhesive is enough to act as a resist to the ferric chloride used to etch the metal. I had to carefully brush acetone on the areas I peeled off the sticker paper. The residue is enough to resist the acid. Then I dunked the whole blade in ferric chloride for 30m or so. Put some oil on the blade afterwards or it will rust quickly. I was surprised how well it came out. You could also do the opposite of what I did and only etch out the lettering instead of the rest of the sword.

This was a cool trophy to win. The artist did a great job.

One of the trophies for Isley Brewing Co. Triple Strike tournament in Richmond, VA this weekend.

I made these for my flip off hunger last fall…the food from the cans was used to make chili for the players and we raised over $900 for local food bank. Pretty pleased.

The infinity mirror dungeon hallway is so flippin cool! Do you have any photos in regular lighting, to see what the rest of the trophy looks like?

This should give you an idea:

The new trophy design that BAPA has started producing (we’re a bit backlogged on trophy production):

New custom drinking trophies for this weekend’s tournament in Lafayette, IN. Come on over and play. 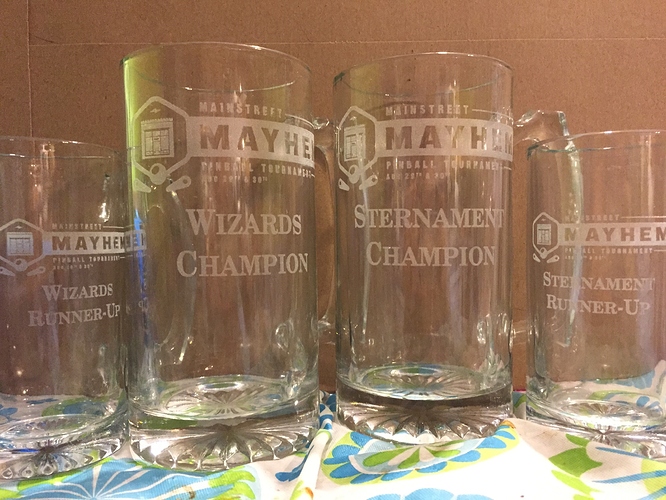 I finished up some custom trophies for our Pingolf league over the weekend… looking forward to giving these away in a couple weeks. 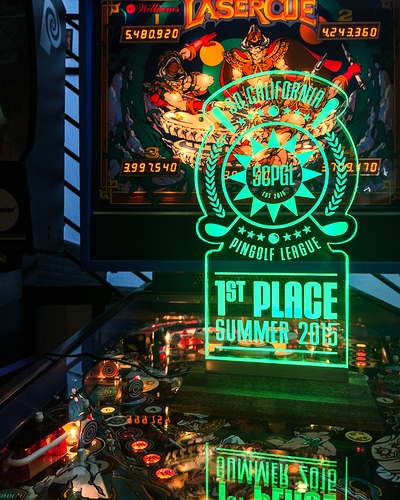 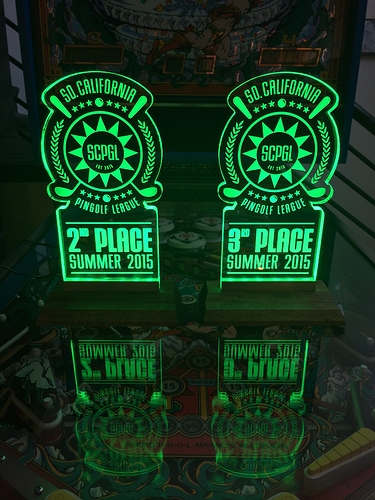 damn those are nice! Do they have LEDs in them to give them that glow?

Thanks! Yeah… It’s etched acrylic (I have acces to the machine at work) and I put LED strips in the U channel the acrylic is sitting inside. When you put a light against the edge of the acrylic it will diffuse where it’s etched making it look like its glowing. It’s kinda the same thing as a clear exit sign.

Man, there are some really cool trophies pitured in this thread. That Sanctum trophy is insane!

Someone needs to post a good close-up picture of the one James Calcia made for Pintastic too.

Here are this seasons NEPL finals trophies. We have over 160 players competing in 4 divisions next weekend for these. 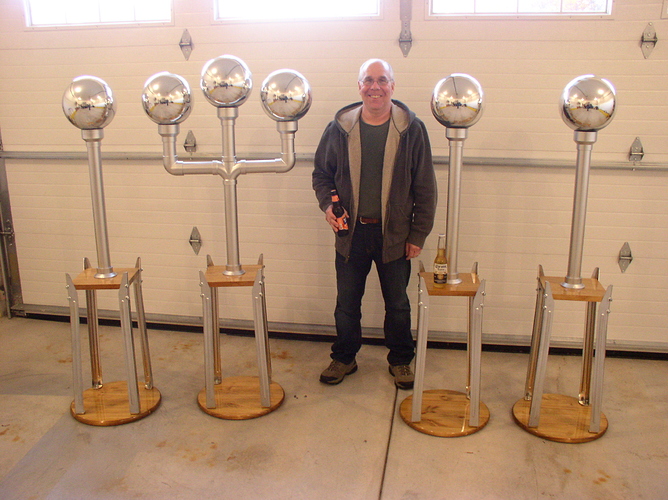