Definitely check the clearance off the bushing, I found my right flipper had zero play out of the box. Fixing that did help combos from right inlane, but still quite tough with hot flippers. Will likely add fans as well.

@KME - are factory-installed flipper fans on the radar at Stern?

Perhaps right flipper could come up a smidge. 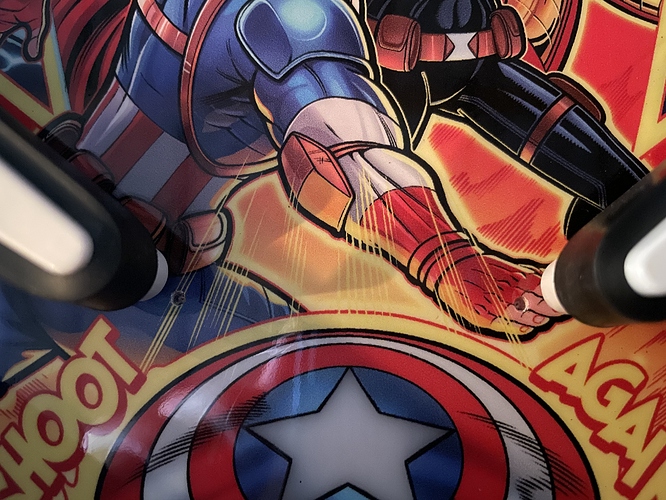 Wait. Flipper coil fans are a real thing? Could you post a pic? This I gotta see!

I’ve been testing these fans on my stranger things’s flippers and they worked wonders for a game that is very temperamental to flippers fading after long games and making it much harder to make the demo mouth and magnet lock. These 100% fixed that issue. Got me thinking. These would be perfect for pump and dump tournaments to help solve the issue of game getting tired after long periods of play, no doubt due to flipper coils getting too hot. I think these will be in production and ready to pu…

For sale right now via pin monks store on pinside.

If you don’t want to buy kits, you can hang a 12v computer case fan off the flipper plate with an L bracket or similar homemade mount, they work pretty well. Monk’s kits look nicer though.

What would you say is correct flipper alignment? I posted a picture just below. My left was basically dead center of bat to hole. The right flipper was maybe just a smidge low.

I actually just adjusted them both to be slightly above the holes and it’s MUCH better (at least as far as shooting the center ramp on the fly).

All three I’ve played are like that, and I had access to check the flipper bushing play on all of them. Makes it tough to play Iron Man MB and whatever the orange mode is. Factor in heat/fade and I just avoid the left ramp completely unless it’s necessary for progress.

Factor in heat/fade and I just avoid the left ramp completely unless it’s necessary for progress.

Whoa. That’s totally opposite of the AIQ I play: the left ramp is my go-to shot for starting combo sequences. I hit it from both flippers relatively easily, because I also typically like to level up Black Widow for better gem powers. A fast-rolling R inlane makes it difficult to hit the L ramp on the fly, but a slow-roller (for instance: from the Antman Vuk feed) is easy to hit it.

I went from that first picture I posted to this: 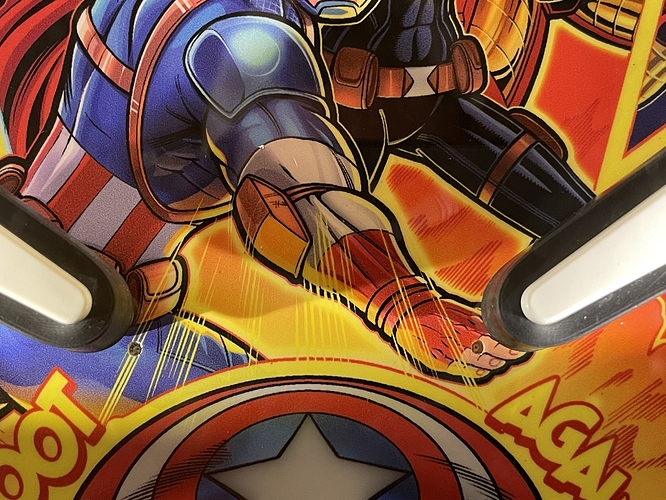 And things are 100% better. Yes with a lot of play it’s a bit tougher. But less than a half inch made a world of difference for the better. I can right orbit to left ramp with relative ease (and when I miss, I recognize that I shot just a bit late). This was not the case out of the box.

Edit: I’ll also add that out of the box backhanding the right ramp from a trap was just barely possible, and with any fade it’d be impossible. This new alignment solves that, and I know it’s been said that the game was designed for all flippers to hit that ramp.

Can you or @iepinball explain how this worked?

I’m neither but I’ll try:

Next shot is hulk in soul gem. Space gem on him. Shooting that shot clears that soul gem shot and enables action button to move (and recharge) gems for 3 seconds. 1 FLIP. So long as it’s moved to another level 1 avenger, that’s three more action button booms. So for soul gem that’s Thor, drops, then captain marvel.

Karl got a friendly return enabling 1 FLIP to tower.

Think I got that right?

Interestingly, the mind gem cannot be on a level 2 avenger, as action button clears all shots on playfield at once. Good for modes, bad for soul gem.

Think I got that right?

Hold on here. 1 flip might be possible if the mode can be completed with the action button:

I’m mostly kidding about this.

Mostly got it there. Need to have Space Gem on Hulk and Mind Gem on L1 Captain with a L1 Black Widow ready to go so that when you move the Mind Gem to Black Widow you get another 3 action button hits for a total of 6. If you push any to L2 you’re screwed. Then the lucky bounce. Had been trying for a while and just got lucky getting the perfect bounce once I was on stream.

Why does mind gem have to be on Cap? I understand the level 1 requirement.

Because when you use the space gem they all move to the right. 2nd mind gem needs to go onto Black Widow, thus it has to start on Captain.

Why can’t 2nd mind gem go to anyone else? Say, starting on Thor and moving to black widow? Assuming L1 requirements in place? I must be missing something about the mind gem.

Figured it out yep. There is no Thor. Other adjacent placements fall into marvel or drops which change gem actions.

Except there’s a bug where the Space Gem can only move gems one spot when placed on Hulk.