The same way we saw challenges for Escape Nublar times, I think there should be a similar challenge for completing Soul Gem Quest with most remaining flips.

Theoretically:
You start with 30 flips, then get 8 flips added for each shot made (bar the last) making a total of 86 flips available.

I believe the absolute best you could finish with is 79 (on a Prem/LE) with a few lucky slingshot bounces and dead bounces.

A further flip could be saved with a slingshot bounce to Antman awarding a shot.

I played an LE on site for the first time yesterday and managed to finish with 55 flips remaining. 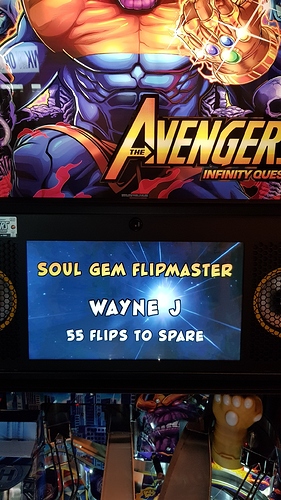 My best is 63 flips remaining.
Definitely a fun mode. Nice theoretical “perfect” analysis. Although, Big leaps of faith in there about getting the ball to do what you want after the Hulk orbit and dealing with subsequent pops feed, and assuming the drops get swept by a lucky slingshot — sometimes I’ll get 1-2 from lucky sling, but not fully completed.

Also, I prefer to attempt the mini loop after gauntlet ramp to feed the R flipper for the hulk orbit shot — the AIQ I play, if you let the ball go past upper flipper, it’s SDTM.

The other big problem on the AIQ I play: Marvel ramp often rejects. 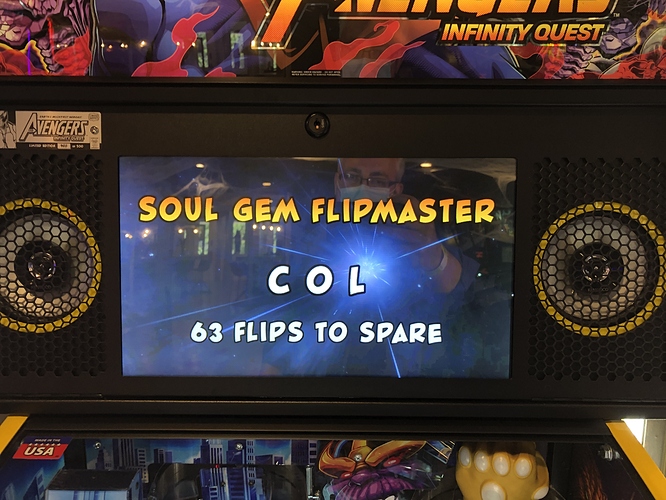 I agree about the lucky slingshot bounces being in the lap of the gods. When it has happened to me it’s been multiple hits rather than a single sweep, and also happened after a failed attempt at a catch, so wasted flips there anyway.
Something else I also learnt (iirc) is that the drops don’t reset when it’s their turn to be hit, so if 1 or 2 are already down that makes completing them easier.
When faced with multiple drops, I prefer to shoot antman for the completion reward that way, then you have a nice feed to hit left ramp then Marvel- theoretically.

Can you start the soul gem quest at the beginning of a game like JP?

You can start the game’s final wizard mode at the beginning (like JP), but Soul Gem is a middle wizard mode.

On a pro (maybe a premium but will be tougher), you can nick the THOR ball, count it as a shot which lights the drops, and as you nick it go up the right orbit half way into flank attack which spots your drop targets. Big.

Also: Holding up the flipper after the gauntlet ramp saves a flip

mine also rejects from the marvel ramp - need to have a tinker.

also worried about the spinner getting whacked whilst its not fully raised.

but I have to say @sk8ball this game is fantastic. Its very accessible for the more crap player!

Its very accessible for the more crap player

We’ll add that to the flyer

Mind Gem is definitely the way to go 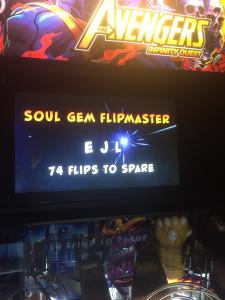 @pnmastr you should snap a pic of my soul gem flip score on Bang Back’s Avengers, I think it was in the 70s…

Posting in this thread cause ain’t no way I’m hitting 70 flips if I can’t make it through that stage without comboing those two shots.

Anyone else played an AIQ where the right orbit to center ramp combo is just impossible?

Yes. VUK feed on LE works fine. But from the R orbit or Hawkeye… good luck.

I actually had some better luck with it at a shallower pitch, but I usually prefer at least 7 degrees.

It is strange though, as I’ve seen quite a few streams in which that shot is pretty reliable, like the dead_flip reveal stream and the Ostermeier stream. Johannes, practically turned the game into a left ramp, gauntlet ramp, inner orbit, repeat combo fest. 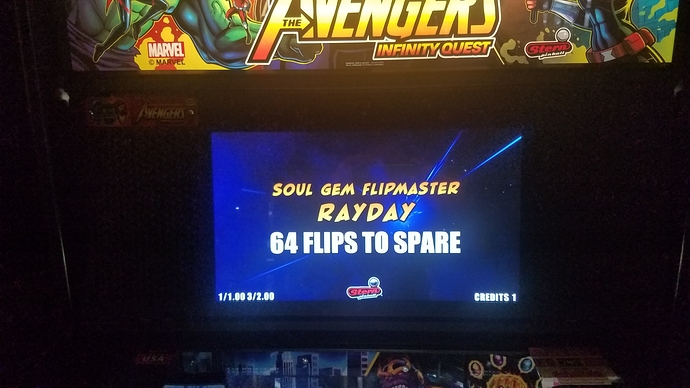 Gotta be something wrong. Flippers aligned correctly? Enough play in the flipper bats themselves?

Mine allows right orbit (to right inlane) to center ramp no problem… until the flippers heat up after ~30 minutes of playing. Then the center ramp is almost completely unmakeable from a rolling right inlane of any kind.

I will be adding fans for the flipper coils, which I have heard solves this problem completely.