I was playing World Poker Tour the other night and during ball 2 or 3 of a game, two weird things started happening: Hold’Em hands would no longer advance (a shot to a ramp would not deal more cards and I don’t think skill shot did either), and All In multiball was always available with one hit to a spinner. It said that the pot value was at 1 million and all in was at 1 million. Even after playing All In. Even after playing it the second or third time. I was streaming/recording, so I can grab some screenshots or video clips later.

P.S. This doesn’t take anything away from WPT being a fantastic game. Thank you Keefer!

They probably are related. When you go all-in, it instantly finishes the hand off for you (since you’re all-in, duh), which obviously is supposed to reset the pot. However, since it cannot award the hand since it isn’t all done, the pot stays the same but all-in still starts. This is remembery from like 10 years ago mind you.

There’s a table of values for all-in, the requirement for all-in starts at 500K then goes up from there. At first it’s by 250K, but later it goes up by more. It’s a little odd to me that the all-in requirement doesn’t go up when you start all-in, wish I knew what that was about. But again, must be related to hand completion somehow.

I guarantee you the problem will not occur outside of competition mode as the community cards are 100% random (the hole cards are weighted). The problem lies somewhere within the random hand generator that attempts to create hands of a certain time. It generally works by making the hand it wants, then filling in the rest of the cards in such a way as to not accidentally promote the hand type to something higher. Somehow, one hand type is prone to excluding too many cards for some reason, in all likelihood.

Hold’Em hands would no longer advance

I’ve been in the state before a few times. Notably shite was during a great qualifying game at expo, where i was then locked out from advaning pretty much anything after that point lol. Never been able to pin down what causes it.

Reminds me of that bug on Sopranos where You’re at Consiglieri and poof, all of a sudden you drop all the way down to Associate. Thanks

Reminds me of that bug on Sopranos where You’re at Consiglieri and poof, all of a sudden you drop all the way down to Associate. Thanks

This happened at our Gameworks monthly tournaments all the time.

I guarantee you the problem will not occur outside of competition mode as the community cards are 100% random (the hole cards are weighted).

Thanks for the info.

I bet disabling competition mode mid-game would allow Hold’Em to progress, and if so, that would probably be the best way to handle it in a tournament. Maybe even re-enabling it after the completion of that hand.

I didn’t know that all-in completed the hand. With how well these spinners are spinning, I might start using them to complete some hands. I guess the downside is dealing with the feed from the orbit, but I want to get better at loop passing anyway.

I bet disabling competition mode mid-game would allow Hold’Em to progress, and if so, that would probably be the best way to handle it in a tournament. Maybe even re-enabling it after the completion of that hand.

If you can figure out what hand you were supposed to be on, either by counting or getting exactly what the first 5 (ideally 6) cards were, a sympathetic party might be able to do something about it at some point. Unfortunately, a sympathetic party hasn’t done anything about FG yet, so I probably wouldn’t hold my breath too much on that.

I have experienced this bug at least once as well. Or at least, the “not being able to advance hold 'em hands” part, not the constant all-in part.

Something odd happened to my WPT, I had some 25M, mode running (don’t remember what) and when got time, checked the display and there it was, 2,5B points (shown on the mode-display). Unfortunate drain and get to put initials for GC. I have had the game for few weeks so not so familiar whit it yet so can’t be more precise. 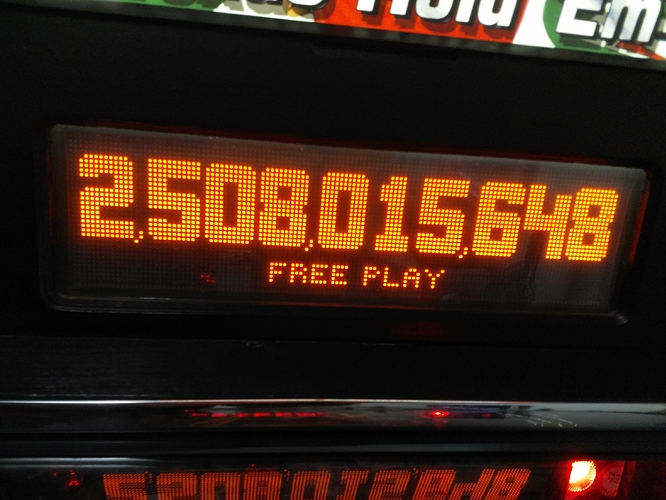 Most likely an opto went haywire.

And I’d guess the opto in question is the Ace in the Hole bash opto. Getting like 300 jackpots in quick succession tends to run up your score.

We have a Wheel of Fortune at my spot now. This guy called me over, hey, there is something wrong with the up post on the ramp return. It was jigging. I said, it believe it is the ramp entrance switch. And realised it is an opto. Then we notised, that the game had tallied up some 350 ramp shots. Yep.

During test, one guy had that happen to him during Ramp Rampage. Oof.

This has happened to me 2 times and once to my son. Always seems to happen when multiple multiballs are initiated but I can’t pin down what the trigger is. We have it in competition mode so I’ll have to try taking it out of competition mode when it happens again. Glad to hear that it seems to be a known bug. Just wish it could be eliminated!

What’s the bug where Ramps permanently become 2.5 million per shot coupled with some other weird occurrence? I think Brian Shepard had it happen at Pinburgh.