Toy Story 4, designed by Pat Lawlor, takes players on an adventure to the carnival where fun games and new toys of all shapes and sizes await. Designed with players of all skill levels in mind, the goal of the game is to start or complete scenes to access the wizard mode; completing most of them simply awards increased scoring for the wizard mode.

The game gives you 3 attempts at the Skill Shot per ball (short plunging or draining without validation counts as an attempt). After 3 attempts, the Skill Shot automatically fails and the ball is auto-plunged into play.

Andy, Bonnie, and the rest of the toys hit the road in an attempt to rescue Bonnie’s new homemade toy, Forky, from an antique store. Meeting “lost toys” that their owners have neglected and are free to do as they please, Woody and Buzz’s priorities begin to shift as they make their way through a carnival and make new friends.

The plot of Toy Story 4 is conveyed through seven scenes that the player simply has to start to gain access to the wizard mode, Meet Me At The Carousel, though completing certain tasks during each objective adds score multipliers to the wizard mode. The player must complete the wizard mode twice during a single game, once for both characters, to enable Fireworks for one final payoff.

Scoring the Mega Jackpot adds a multiplier to Meet Me At The Carousel.

Shoot the ramps during Quick Multiball to score jackpots and hit the bumpers to increase their multiplier by +.1x for a short time. After collecting enough ramp jackpots, score the super jackpot at the Inner Voice saucer. After collecting the Super Jackpot, the Intergalactic Jackpot hurry-up begins and can be collected at the scoop.

Scoring the Intergalactic Jackpot adds a multiplier to Meet Me At The Carousel.

Complete the FORKY standup targets to enable the kickback and light the left ramp for Forky Rescue. Rescue Forky by shooting the Duke Caboom ramp followed by the scoop, all in one combo, for 250,000 points! Unlike all other objectives in the game, Forky Rescue must be won in order to qualify Meet Me At The Carousel. Shooting roving FORKY targets while Forky Rescue is already lit increases the value for the next Forky Rescue by 50,000 points per hit.

Shoot the ramps to score tickets shown on the numbered inserts below the Duke Caboom jump ramp. After collecting enough tickets, shooting the left ramp when a carnival game is lit spends your tickets and activates one of twelve carnival games at the left ramp (the first game doesn’t require any tickets):

Note: Modes increase in difficulty the later they are played, generally adding more shots or increasing the requirements on spinner turns. Every lit shot during the mode lights the scoop to add 3 seconds of time.

Every successfully won carnival game lights the left ramp to add a perk (and a toy) to Carnival Multiball. They are awarded in the following order, and do not correspond to certain toys:

There are also “minor prizes” represented by Bonnie’s other toys, which provide Jackpot boosts. For each mode that was not completed a minor prize is awarded.

After playing or winning any carnival game, the scoop can be shot to lock balls. Locking 3 balls begins Carnival Multiball.

Carnival Multiball is a multiball played in (at least) 4 stages:

Complete the Woody spinner and Bo Peep spinner by collecting enough spins at both of them to enable Super Spinners. During Super Spinners, rip the spinners to increase the value of the spinner jackpot that can be collected at the captive ball, which can be collected twice. Collect both spinner jackpots to add a multiplier to Meet Me At The Carousel.

Shooting the inner loop enables the left inlanes to lower the Duke Caboom jump ramp for a shot into the Star Adventurer stunt deck. The flashing Canadian maple leaf icon indicates whether or not the lanes will raise the jump ramp. The inlanes can also be lit permanently by scoring Caboom off the Take A Chance Wheel.

After jumping, the Right Ramp will be flashing red. Shooting this shot gives you a choice of shooting the Left Ramp to continue building the Caboom Jackpot (with another jump/right ramp combo) or the Road Trip Lockup to collect the Caboom Jackpot. Collecting this Jackpot will complete the scene and add a multiplier to Meet Me At The Carousel. Alternatively the scene can be qualified (but not completed) after 5 successful jumps.

Collect 10 jumps during a game to light the extra ball.

Shoot 3 consecutive upper loop shots at any point to complete Bo Peep and add a multiplier to Meet Me At The Carousel. Alternatively, shooting 15 upper loops will qualify (but not complete) Bo Peep.

Meet Me At The Carousel (Wizard Mode):

After all seven scenes have been qualified or completed (and Forky Rescue has been won), shooting X will begin the wizard mode, Meet Me At The Carousel. Scoring is multiplied by +1x, up to 7x, for every scene that was completed before starting the wizard mode.

Shoot the left target, then roll through the inlane closest to the left flipper to light a random shot from that flipper for a hurry-up award for a few seconds. These shots can be the scoop, captive ball, Woody spinner/saucer, Warp target, FORKY targets, or right ramp.

To Infinity & Beyond Jets:

Collect enough jet bumper hits and/or Inner Voice awards to advance the SECTOR.JETS and light a jet bumper. After passing SECTOR.JETS level 4, Super Jets is enabled and all bumpers will be flashing for 30 seconds to add 250 points to the value for hitting the Warp target, which starts at 10,000 points. The timer pauses with every bumper hit.

If the scoop is shot when nothing is lit there, a receipt will be awarded scoring a random value between 1,000 to 10,000 points.

At certain points during the game, the Gabby Gabby target will raise to the left of the jump ramp. Collect X Gabby Gabby target hits (default is 5; requires 8 after the first) and complete her name to start the 2-ball Gabby Gabby Multiball. Shoot the ramps to score 25,000 point Jackpots and pop up Gabby Gabby for an extra hurry-up value. Shooting the upper loop scores a Double Jackpot, and after a certain number of Jackpots will also be lit to collect the Super Jackpot.

Spell ALIEN by shooting the captive ball (4 letters are spotted by default, decreasing by 1 per award collected) to light the Take A Chance Wheel, which has 8 marked inserts corresponding to different awards. Each insert also lists the shot required to score the award, once qualified. Lit awards can be changed by shooting the captive ball (nudges the wheel) or upper loop (spins the wheel).

This is a retro-styled pinball game where along with maxing out the bonus, your goal is to hit 30 switches to start Tiki Party Multiball. There is a certain amount of ball save time, after which Sudden Death begins and the next drain ends the mode. Completing the top lanes (with 3 of the 4 being awarded on an adjustable top lane skill shot!) will award 2x Tiki Party Multiball if the switches are completed.

Extra balls can be lit at the scoop from:

Bonus is comprised of:

All multiplied by the bonus multiplier, which advances through successful skill shots (multiples of +5x), completing both outer inlanes (which cycle with the flippers; +1x), or from upper loop shots during Super Loops (+1x each).

@CaptainBZarre You don’t waste a second getting these things going! haha

Made a small edit to the Carnival Multiball section based on something I noticed around 8:26 in Jack Danger’s recent video of the game: 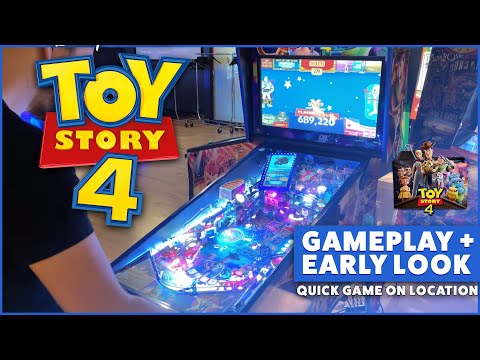 For anyone who’s played this game, have you found a reliable way to shoot the Buzz saucer? Seems like quite the tricky shot especially considering you can’t really shoot it directly.

Nope, just shoot up the middle to the pops and hope for the best. Seems a bit easier during a multi-ball when you can get 2 or 3 balls up there at once.

Makes sense to me, thanks. I was a little concerned about how they’d handle a seemingly random saucer shot but it really isn’t too different from the kickback relight from Banzai Run, and the bumper layout kinda encourages the ball to bounce in there.

Yeah, after a few hours it’s honestly not that bad of a shot to hit. You can accidentally shoot into it from a half right ramp/upper loop feed and even from the saucer itself (there’s some code to prevent immediate returns from counting, but if you hit into enough pops you can get multiple saucer hits in one trip).

Added pretty much everything I know from hands-on experience from the HUPChallenge streams yesterday. Only things I’m missing are a few modes (because I don’t have the time to scrub through the footage to find them), Stage 4+ in Carnival Multiball, and Meet Me at the Carousel because Forky is a…another word that starts with F. Especially when the game decides to divert you to the wrong inlane and you lose out on Forky.

I added a few mystery awards to the bottom of that list. Feel free to fix the formatting if needed. One of them starts the My Best Friend Benson mode which revolves around the creepy Benson puppets. I don’t see it mentioned anywhere in the wiki yet. I know the Benson posts around the Caboom ramp randomly pop up during the mode, and some jarring sound effects are played during this. Only encountered it a couple times, and not sure how to start, or what to do during the mode.

Banzai Run’s saucer (to relight kickback, Lock a ball, etc) is most certainly a direct shot from the flipper. It can be difficult to hit, but a direct shot is there from the L flipper. You don’t have to rely on love from the pops.

Fair enough - I think this is definitely a rather different kind of “bumper shot” than what we’re used to but I’m fine with it regardless, especially on a game meant for newer players… though the bumpers have the potential to be downright evil if they eject the ball SDTM.

Agreed. I’m looking forward to playing it.
And it seems like not too bad of a non-direct saucer, if TS4 owners/operators keep their pops firing actively. Definitely doesn’t seem to be as random/lucky as say, Catacomb locks. haha

The better comparison would be that kickout in Indy 500 that scores whatever’s lit at the center sinkhole and kicks the ball out there, with no real way to shoot it other than a rebound off the left lite-up target. Also the kickout on Stern Pirates that the ball falls into randomly and just kicks the ball back out.