Pin a go go is 198 days away. Get excited pinheads, its going to be epic.

Lol maybe, it seems really out in the country tho. Is it really rad?

Yes, It is. don’t take my word for it, ask others who have attended.

Don’t want to come off as negative at all, but how is it going to be epic? I like pagg a lot, so mostly just curious if there is something new happening compared to previous editions.

Is there an official PAGG podcast? I need more details.

just wait, updates and info will be coming. stay tuned.

no pagg podcast. but that is a good idea.

My first pinball show was PAGG this year, and it was just amazing! I’d go again if I didn’t move to the opposite side of the country.

This was my first year that I attended and it is the best show I have been too! It was great.

Flash!!!
The Dixon best western inn has the first block of rooms for play n a go go available.
Reserve yours now as they go quickly.

I have the titles of the 2 games to be raffled at this years pin a go go.

I will reveal them later this week.

1 is an alphanumeric game made by Williams.

the other is a western themed em game. happy guessing pinheads.

the 2 pins that will be raffled at this years pin a go go are,
DINER and LITTLE CHIEF.https://www.youtube.com/watch?v=eVQf63D5dWA

Pin a go go is only 70 days away.
The website has been updated and game registration is open.
So sign up your games, and get ready for pin a go go.

Update, the theme and art have been released.

Also, Dirty Donny has been confirmed as a guest. 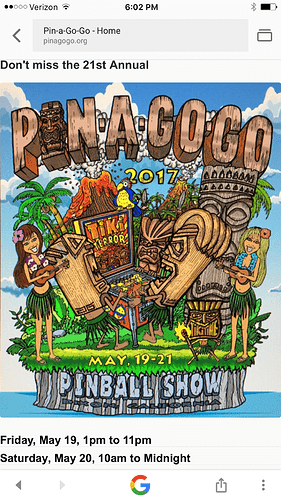