The Most Satisfying Standup Target Shots

We all know direct shots to standups generally equal death…

With that in mind, what are your most satisfying standup shots? Grazes, accidents, richochets count, and best of all, a clean shot back to a trap counts 2x if you don’t drain!

My top 3 are as follows:

I forgot about TNA since it’s always changing as you move through each reactor.

IMDN Super richochet from the mummy captive ball is the way I usually make it, instead of direct from the upper flipper. Thanks @sk8ball !!

I’ve been obsessed with the TNT target on ACDC lately. Loving that mode!

The tron target that banks you into gem. Haha

You mean the one that is always bent right from being smashed too many times, and now it’s closing up the quora shot?

Yeah. I totally meant to hit gem, not quora…

No the tron stand ups on the left. Depending on how the game is setup, you hit the ball off those on purpose to bank perfectly into gem.

On WOF, if the Lonnie target is lit for something good (Trip, 500K, EB) and you have the ball cradled on the left flipper, you can bank a shot off the B or A standup on the right into the Lonnie standup. NES taught me that one.

Lawlor really does have some great, highly satisfying standups! In addition to the ones already mentioned, Carry Passengers in Taxi is a fun, challenging shot, and I love the Train Wreck / Jackpot in Addams, both the way it is at the end of a long lane, all by itself, and for the great sounds and callouts you get when you hit it.

The Big Bang in Dialed In is my #1 as well. I’d also give honourable mentions to the Snikt target in Deadpool (standup into a ramp!) and the Gravestone shatz stand-up in Iron Maiden for their innovation.

Getting the lit Special standup on Stars is always nice; has a habit of winning games…

Double special from the Queen’s Chamber on Centaur.

Getting the lit Special standup on Stars is always nice; has a habit of winning games…

Unless someone braver than you collects a few drop specials!

Flight 2000 Bonus X target, since it’s in a pretty deep lane on top of being a hard shot.

Medieval madness Catapult target - the satisfying CLANG on top of the extra progress is sweet!

Backhand to the 4-5-6 target bank on F-14 for a ricochet into the lock. Extra satisfying if you time it up to hit the roving lit number since that will light the loop shots for advance bonus X which you get an immediate opportunity to collect if lock isn’t lit.

When the Cashier target is lit for big bucks after completing “VEGAS”. Getting this up to 32mil and nailing it over and over is insanely satisfying. 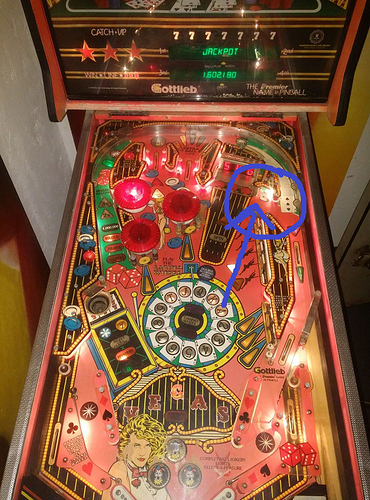 The Elektra 5 bank is also pretty neat, especially with the early implementation of using a flipper to move the lit target(s)

The T standup on TRON, because at least on mine it ricochets nicely up the Gem lane for eas(ier) collects.

The one that doesn’t drain me.