We already have a fledgling rulesheet thread for this game, so I thought I’d start an all-purpose thread dedicated to Stern’s Godzilla. Opinions, news, and more are welcome here, as long as it isn’t strictly about the game’s rules.

I might as well start off with some of my own thoughts on the game. Generally, I’m pretty excited for it. I haven’t seen much of it - not until Dead Flip streams it on the 17th - but Elwin’s games are all enjoyable to me (if occasionally frustrating - the man sure likes his tight shots) and I trust that he’ll deliver again here. The artwork’s pretty nice as well - the bright colors are admittedly a little much, but it fits the generally campy demeanor of the Showa-era films. (Also, I imagine it may work better in darker locations.)

Other things of note:

that might cause issues related to dividing their attention during gameplay.

You know, the funny thing is that the Pro backglass actually has an error related to its Japanese text. 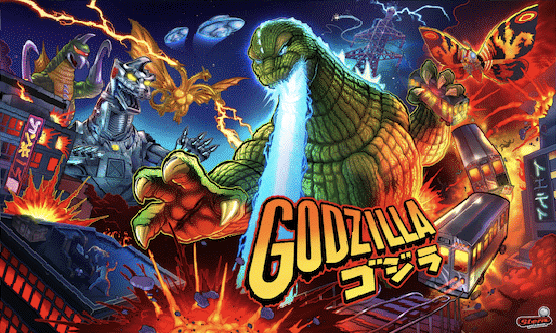 The two signs on the edges are supposed to read “ピンボール” (“pinball”) and “イエティ” (“yeti”), but it seems that the image was flipped horizontally at some point - yet the katakana weren’t corrected before it went public.

Awesome to hear they got the song in there. First time I saw BOC play it was in a stadium. Before a note was played, they played Godzilla calls on every speaker in the stadium, but not their speakers on the stage. Made you think for second that Godzilla was going to walk/ crash into the stadium.

I haven’t watched any of the newer movies, so no idea what Godzilla sounds like these days, but it would be cool to hear an old school Godzilla roar or three in the game.

So you might say the Pro Translite is “mirrored!”

I’ll see myself out.

I don’t like it, based on first impressions from the materials released, but I respect those who do, and I look forward to playing it when given the chance.

While I agree that the new mechs are really cool (though not digging the Magna Grab, from how long it holds the ball to how it feeds the upper left flipper), I dislike how most of them are Premium/LE-exclusive. After seeing the more expensive, yet fully-featured version with Keith’s complete vision, I’m simply going to feel “left out” every time I play the more sparse Pro version. Most of the arcades I visit will probably just get Pros.

The theme and art don’t do much for me, as I never grew up with Godzilla, but I imagine people who are fans of the series will have plenty to enjoy in this game.

Elwins pros are amazing. I don’t feel left out at all when playing any of them. This game will be no different.

And if you can try to enjoy what you can play. These are first world problems. I am grateful to play whatever pinballs whenever I can and the few I can actually own - grateful for those.

And never say never - I hope you get more full featured machines like a Premium near you so you can play the extra features.

He does a great job making me want a premium/LE, but I agree - the pros never feel like they’re truly lacking.

I disagree, but great that you and others here enjoy the games. Hoping that Godzilla will be another home run for y’all–it’s just not for me.

Very well could be a game I’m not into either, but I’m gonna play it a bunch before I make that determination.

I’m not into the theme, but the game looks incredible! I can’t wait to play it!

… but it would be cool to hear an old school Godzilla roar or three in the game.

Old school Godzilla roar at the beginning of every ball. Outstanding.

If it was me, I’d black out the whole game at the beginning of Godzilla MB briefly, play a loud Godzilla roar, then light everything up and start MB.

vs. Hulk. Can’t forget about him.

For obvious reasons, the moving building mech is taking the headlines. And if not that, then the bridge or the rotating target/spinner.

Though I would like to put some limelight on the magnet cylinder. I am excited about it and look forward to play the game and see how it works.

Lately I have become unhappy with magnets in pinball. Especially those sitting consealed under the playfield just to make havoc. But generally, I do not like magnets that much. This is a great innovative step. And this is my take on a couple of details that makes it work.

First of all, a device this wide on that location on the playfield has to be a shot of it self. Meaning having indicators associated. Giving it purpose. And registering a direct shot. That could be achieved by photo or magnetic sensors too. But choosing a Newton-effect to a captive ball behind it is the way to go. Reason being that a captive ball arrangement puts the live ball to rest on impact (when optimally hit). And the motion after this is rolling from gravity only. Where as any other shot in the game, targets, posts, rails and rubber bands, will bounce the ball away.

Having the ball at rest by the magnet on - shot made - improves the chance of the magnet being able to catch it. Or impact it in the desired fashion with consistency. To me, this is an example on how you take an idea (the magnetic super post) and make it work in practise. Integrated with the rest of the game. Cheers @sk8ball and team. I look forward to try it on. 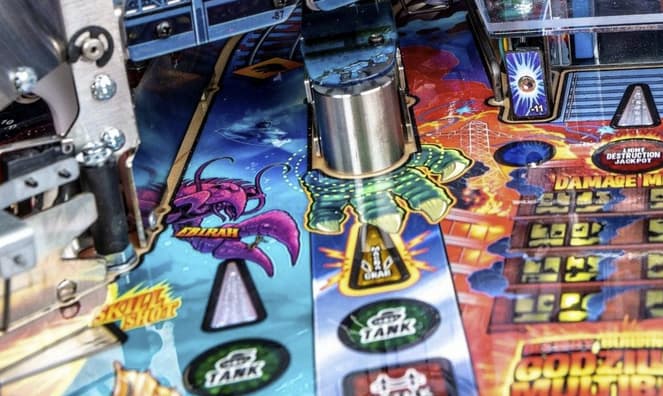 But choosing a Newton-effect to a captive ball behind it is the way to go. Reason being that a captive ball arrangement puts the live ball to rest on impact (when optimally hit). And the motion after this is rolling from gravity only. Where as any other shot in the game, targets, posts, rails and rubber bands, will bounce the ball away.

I never thought about that aspect of it being a newton ball and wondered why a concealed newton ball was used. But that makes so much sense, gotta love the practical thinking of that choice and how much of an affect it will have on the effectiveness of that toy. So glad it isnt stripped out of the Pro as it looks to be super important to the overall gameplay/rules which probably doesnt happen if it’s only on the Premium.