I’m currently suffering from pinball tendinitis in my right elbow, and wondered what high volume players do to avoid overuse injuries. Any insight appreciated.

I use a Bandit and I feel it helps a lot. Although consulting a medical professional is probably good advice. 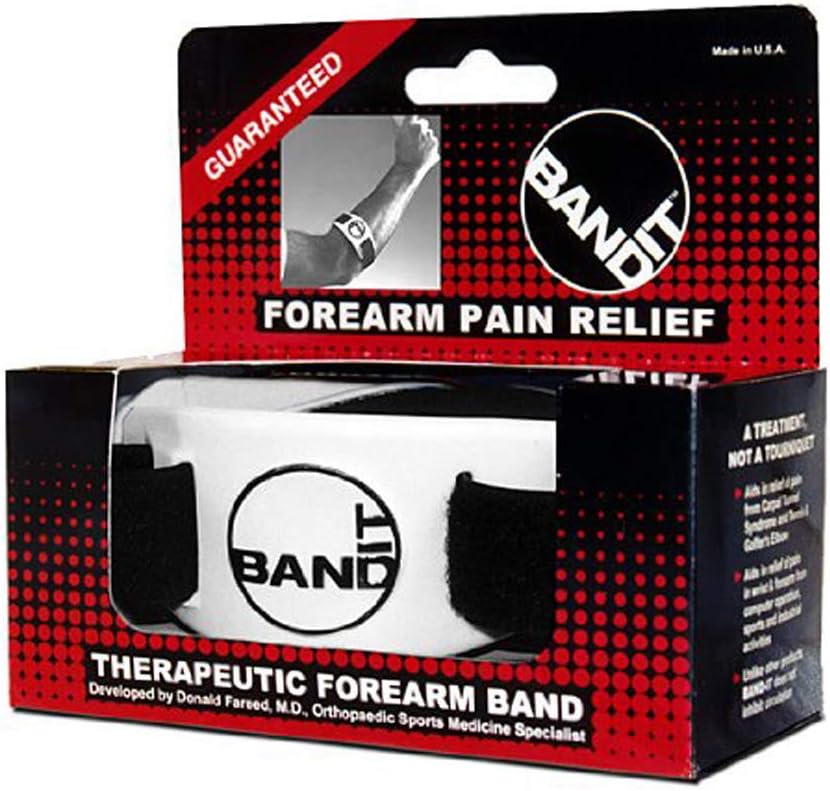 The BandIT arm band aids in the relief and prevention of pain associated with Tendinitis, Tennis Elbow, Carpal Tunnel Syndrome, Repetitive Stress Injuries and Cumulative Trauma Disorders sustained in the workplace or in recreational environments. The...

Do you lean on the game when you play? I see a lot of people doing that and it’ll mess you up long term. Not to mention you’ll tilt a lot more often…

Gloves and sports tape. While the gloves aren’t on your elbows, the cushioning they provide will reduce overall joint stress better than just tape. You might also keep some heat ointment with your and apply it after playing a while as a precaution.

I was gonna say the same thing. My wrists and elbows killed me until I learned to stand at the game instead of lean on it. Been fine ever since.

I’ve had this issue in various ways - , elbow, fore-arm tendons, and shoulder(s).

Physical therapy/strength and resistance training will help a lot in the long run.

Short term and when it is irritated, I’ve had a lot of success with sports tapes like KT tape Other note, something about the ergonomics on Stern games blows out my arms and shoulders 10x as fast as compared to a 90’s bally Williams. I think its the lock-bar angle or something. I have some other friends with similar experiences. Unfortunate as they are some of the most marathon-y titles.

I play for several hours at a time and have really only had an issue on Iron Man(left elbow) and Godzilla(right elbow) despite playing similarly on B/W games. Never thought of the cab design as the issue, interesting.

Yeah its weird - like 3 hrs on AFM and I am fine. The same on Batman66 and my shoulder is done for a month.

Are the Sterns a little lower height from floor at the lockdown bar? Not at home now so can’t measure, but I always found them to be more comfortable and easier to move, and I’m short.

It’s the height of them that gets me. The lockbar is definitely lower than other games and steeper.

I’ve actually started putting 4” levelers on the back and raising the front so I can get the same steepness, but just raise the game up. Helps a lot.

Played some Godzilla and AFM last night and I definitely lean heavy on the right side of the Godzilla vs AFM. I think part of the issue is that my lean on Godzilla is caused by the anticipation of having to make a save off the lower pop bumper. On AFM my stance is much for relaxed.
When IM was messing up my left arm I was definitely making more saves using my left arm than right.
Soooo…going to try to work on playing more relaxed and see if that helps. Besides that I’m pounding Advil and using a thermagun on my forearm. Not ready to join the glove crew…yet.

Modern Sterns are also usually back-heavy, which usually means making moves towards the front of the cabinet is easier to pull off - especially slide saves when the game is not on rubber feet and is on a smooth surface.

A few years ago, I had gone to one of my regular chiropractor appointments, and while I was there for back adjustments, he’s very chatty and I mentioned something about my concern about being able to play in an upcoming pinball tournament because my elbow was really hurting. He says, “let me take a look.” Then proceeds to tell me that I have Tennis elbow. I quickly respond, “Wrong. I don’t play tennis. Pinball elbow maybe, but not tennis elbow”. He then says, “I can fix that”. On that day, he started to adjust in particular around my wrists on every visit (he said the issue was around the wrist, not the actual elbow; the elbow was a side effect). Pain that I used to have regularly, which had be wearing gloves in the past, putting on tape, braces, etc. Pretty much after a handful of adjustments, was all gone.

So long story short, a chiropractor (who knows what they are doing) may be able to help.

Interesting enough I used my thermagun to massage my wrist last night and my elbow felt much better today. From the way my fingers twitched I think there is a tendon there that runs from hand to elbow. I think I might be putting too much pressure on that spot causing the pain.

Also, my chiropractor suggested that I wear this anytime my elbow does start acting up while I’m playing: https://www.amazon.com/Zofore-Tennis-Elbow-Effective-Relief/dp/B01LM1G12Q

did you try it out?

I have an elbow one arriving this week, but I’ve been trying the one I use below my knee(I’m falling apart) and it seems to give some relief.

i have an inflame wrist for years now, pretty typical to have pinball injury when you play for hours moving a 200lbs box of lights around