The tldr of his data imo is that the larger the scale, the more accurate the qualifying results.

That suggests that the scale running in the opposite direction might be better to allow for infinite scaling, with low points for first and increasing points as you do worse. 0,6,10,13,15, +1 per place or something like that. You then have no ‘zero’ score to much things up.

That suggests that the scale running in the opposite direction might be better to allow for infinite scaling, with low points for first and increasing points as you do worse. 0,6,10,13,15, +1 per place or something like that. You then have no ‘zero’ score to much things up.

I agree - Though, I think emotionally its easier to think about wanting to gain qualifying points. Reversing the scale might feel weird or be less “fun.”

Sailing/yachting uses a low-points scoring system for all regattas—except the ones on TV. Sailors seem fine with it, though it helps that their system is all linear except for first: 0.75,2,3,4,… means that you get points equal to where you finished, which has a nice emotional resonance to it. It’s also dead-easy to explain to new folks for the same reason.

Pinballers (seem to) like having a big gap for the top few places, which makes that line-up harder.

Isn’t accuracy a very subjective concept in this discussion?

Specifically why I said in my opinion

From what I saw, the higher the scale used for this type of qualifying, the better the fidelity to which each entry was graded against other entries.

In smaller scales with more zeros being given out, the less granular the qualifying becomes.

I got curious as to when Kevin changed the Pinburgh scoring back in the day to what it is now . . .

Pinburgh 2003 introduced the new current system down to 1 point for 88th place. A division had a 30% increase in player count, up to 28 players OMG!

Looks like I didn’t qualify in 2002, so obviously that scoring system was bullshit from the start. Qualified in 6th for Pinburgh 2003, so I’m definitely in full support of the current scheme!

If PAPA does change the scoring system, I reserve the right to express my opinion after I see whether I qualify or not the following year

I can understand the purpose of expanding the scale to analyze data-we have already seen examples of inequity among the zero scores.

However, I think there is a nice aesthetic and ease of comprehension to the viewing masses examining 5 scores on a 100point scale. If someone is the 300s at PAPA, we know that is very impressive. (Maybe previously with fewer people that number was higher).

This year, a score of 209 qualified which is an average of about 42 points per game. In other words an average of 46th place on each of 5 games was sufficient to make it to the finals of The PAPA World Championships.

Looking at it that way, I agree with Bowen’s comment about not needing to differentiate between below average scores and super below average scores. How much tweaking needs to be done if currently an average of 42 points per game on a 100 point scale gives a player a shot at the title.

There’s always new ways to look at the data and play with numbers, especially with more players becoming involved. Most of us are inclined toward mathematics it seems anyway, so it’s fun, particularly since it is tied to pinball. The system now, maybe from a strictly analytical viewpoint is not perfect, but in general I think most people agree it is a fairly accurate metric for finding the best players.

In other words an average of 46th place on each of 5 games was sufficient to make it to the finals of The PAPA World Championships.

How many entries are submitted per game? I have no clue, but maybe it’s 400, and then averaging the 46th best score is pretty damn good.

And even if it isn’t 400, you’ve got many, many entries that aren’t submitted at all, but yet any submitted score is still competing against those entries.

Looking at it that way, I agree with Bowen’s comment about not needing to differentiate between below average scores and super below average scores. How much tweaking needs to be done if currently an average of 42 points per game on a 100 point scale gives a player a shot at the title.

Everyone gets more “points”

I disagree with Bowen’s comment.
Currently under this system at papa 18, we are seeing 113M and 12M on cftbl both treated equally in qualifying. A gap of 101M and a difference of almost %1000.

which is a “better” PAPA ticket ? Under the current scoring system, ticket B is better because it’s worth 26 points more than ticket A. So the current system values “3 bombs and 2 goose eggs” over a “five solid, above average scores”

However, if you were to expand the scoring out to 125 or 150 instead of 100, ticket A becomes much stronger (because it’s two “zero” games will begin contributing points to the ticket almost immediately whereas ticket B’s two goose eggs will continue to be goose eggs in any scoring system and will bleed away to obscurity…).

So really, it comes down to whether you want your 5-games-per-ticket scoring system to value a run like ticket A more or ticket B more, and for most players, it really won’t matter an iota because they will still qualify no matter what system you use. And change is hard, and different, and scary, so it’s always easier to stick to what you know, but I can tell you that my approach to a PAPA ticket would change a lot if the scoring system changed, because right now, there’s tremendous value in having a couple of top 20 bombs on your ticket and you can definitely get in with just 3 out of 5 big games, whereas with any deeper scoring scale, playing all 5 games above average becomes essential.

Personally, I think that @Sanjay’s Ticket A was more deserving of a place in the finals of PAPA 18 than my own ticket B (I don’t subscribe to @pinwizj’s what’s-best-for-me-is-best-for-everyone’s philosophy

), and that the PAPA scoring system should definitely increase it’s fidelity to keep up with the volume of games being played in qualifying. #MakeAllFiveGamesCount!

You say that now that PAPA 18 is over, but I guarantee Lefkoff & Associates would be suing for emotional damages over the changed scoring system.

Just to prove that’s correct, I went into Steinman’s time machine, took a trip back to alternate universe PAPA 18 and captured this picture after you failed to qualify by 2 points. 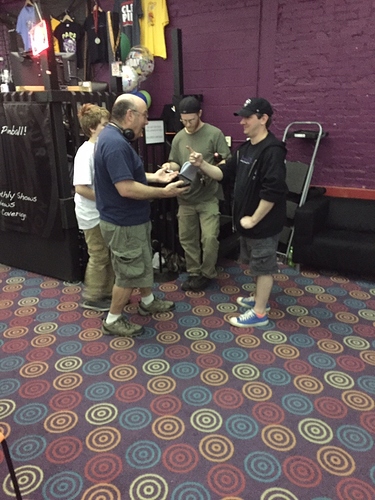 You guys are hilarious! Truth is, PAPA qualifying has always been about the bombs OR the consistent ticket. You can get in with either one.

Actually these scores by JonR and Ben brought up a discussion in the waiting lines at PAPA. Right now, any score 88th or below is worth 0 points. This means a score of 580M on GoT, and score of 2M on GoT, were both treated equally. Yet, both of those scores could have been part of tickets where the players were nearly tied, but clearly one player had a better GoT game. Only top 88 players get points is historical, from when this system began, and we barely had more than 100 plays on a machine. But now with number of plays exceeding 150 for almost every machine, and in some cases in the 200s, is it time to revamp the points? Maybe top 150 scores should get points? Suppose 1st place was 200 points, then we could even have a scale that still is top heavy, but doesn’t have that big drop when a score gets knocked from 1st to 2nd or 2nd to 3rd, but only single point drop after 3rd. E.g. 200, 190, 185, 180, 176, 172, 168, 164, 160, 157, etc. Once we get to about 20th, then single point drop all the way to 150th or so. How would that change who qualifies and who doesn’t? And assuming it does result in changes, is it for the better? Right now the player with three high scores and two zeros sees their score bubble up, whereas a player with five very good, but no excellent scores will fall like a rock. I don’t know what the right answer is, but I do agree with JonR that maybe it’s time to give a score of 500M more points than a score of 2M.

@jdelz Do you know how Joe matches up the game points with the number of players involved?

The effects of a zero score are pretty interesting.

In looking at the PAPA 19 qualifying scores, the 2 players on the one point bubble this year would not have benefitted from an awarding of points from, let’s say 200 to 0.

Cryss S, had no zero scores in his best run, but still just missed the cut. Recalibrating does not really help him. Escher L. was tied with Cryss, but had 2 zero scores. However, the 2 zeroes were not near the upper end of the scores that awarded zero points. So it was not a case of “all that work for nothing.” Recalibrating the scale probably would not have helped him.

This to me is the interesting case: A little farther down the qualifying list is Johnny M. who missed the qualifying cut by 5 points. However, his GoT score of 509 MIL on his best entry ticket was one of the top 10 zero scores out of 84 zero scores.

Granted, I did not recalibrate every scenario and every ticket, but this particular example stuck out to me as a case of all zeroes are not equal.

I don’t agree. 500 million and 2 million on Game of Thrones are both below-average scores.

If you want a comparison for a place where this is already happening, look at Classics. The cutoff for 87th is pretty close to the total number of entries on most machines, which gives below-average games some credit. As a result, in Classics you are hit very, very hard for a poor game.

An alternative would be to change the scoring system to be “exponential decay” (100-95-95% of that-etc), which I’ve seen in some Euro events. This gives a longer “tail” where you’ll still receive points, but not many – I find this fairer in noting that there is a difference between 60th and 80th but that difference is not as important as the difference between 5th and 25th.

We used to use exponential decay in the scoring at CA Extreme but I think we set the decay too steep. Lots of people ended up with low qualifying totals, and it was replaced with the current PAPA system.

For those near the top, it matters little. What I do see, though, is a few entries where players had all 5 games in the top 88 - - still in the top 1/3, not just 1/2 on the machines played - - yet lost out to others due to the scale used. You can make a pretty good case that Cryss, Julio, Paul and Andy Jr. had tickets that were better than Johan’s or Jason’s,

Bowen’s exponential decay proposal is kinda interesting but personally, I don’t think I want to deal with comparing my score of 214.3791 to someone else’s score of 214.9714… that feels unnecessarily pedantic.

I can’t tell if I went up or down based on Bob’s analysis, but like most pinball related things that I hear about WPPR, if Bob’s changes made me go up, I fucking love it!

If they make me go down, I’m pretty sure it’s the shittiest proposal I’ve heard in my entire life