@Snailman send your reports to play@matchplay.events and we’ll take it from there. Thank you for taking the time to record the issues you ran in to

sent in. Also, I really like the new Beta software. It feels better, and it was 100% robust at selecting Arenas and changing Player Order – whereas the original software would hang on those pop-up screens quite frequently (25-33% of the time, it seemed).
Keep up the good work!

Thank you @Snailman! Emails have been received – I’m going to work through them one by one so if I don’t respond right away that’s why.

That arena selection/player order bug in the “old” version is a perfect example of why I embarked on making the new version. Seems like a simple thing to fix, but the old software was setup in a way where this style of “lock up” on the screen is almost impossible to fix. The new setup eliminates this style of bug completely. Something that I’m very excited about because I change arenas/player order all the time and run into the bug all. the. time.

I use the new beta all the time for our league play now it is great, the flip feature works like a charm, just need to get comfortable with the views to show on our TVs and ensure I can get the link to add to banner for OBS as I still flip back to old version as just feel more comfortable in using those features on old platform.

How do You obtain the beta software, I would like to use it for our local tournaments in Manitoba

Well there is a form to fill out to get access… But I think we’re at the point where you can just go to https://next.matchplay.events and login using your regular Match Play password.

Beware of course that there are still missing features and buggy behavior!

I thought to experiment with our monthly Flipper Frenzy tournament by using the next.matchplay.events page. I was able to set up the tournaments just fine, but I have a question and an observation.

First the question: Is there a place to see the matchplay live link (in the old matchplay it’s on the overview page, but I couldn’t find it in the new matchplay)?

Observation: In the old matchplay, it would take 3 clicks to declare a winner on the flip frenzy queue screen. On the new, it seems to take 5. The most annoying extra click is having to pick both the winner and the loser. This makes no sense - if someone is the winner the other player is automatically the loser, there’s no reason to have to click them. Is there another results screen that’s more streamlined?

Setting up the tournament, entering the arenas, etc. is much faster in the new system which is nice.

Thank you for trying on the new version!

First the question: Is there a place to see the matchplay live link (in the old matchplay it’s on the overview page, but I couldn’t find it in the new matchplay)?

There is not. MP Live is going away with the new version. Players and TDs go to the same place to look at a tournament. For the past 5 years I’ve spent so many hours explaining the difference between the TD’s tournament page and the players’ tournament page. Having them split was never intuitive and I really wanted to merge everything into one.

In the in-between where you might be using one and your players might be using the other the workaround is to search for your tournament on MP Live to find it.

Observation: In the old matchplay, it would take 3 clicks to declare a winner on the flip frenzy queue screen. On the new, it seems to take 5. The most annoying extra click is having to pick both the winner and the loser. This makes no sense - if someone is the winner the other player is automatically the loser, there’s no reason to have to click them. Is there another results screen that’s more streamlined?

Ah, thanks for the reminder! I have just pushed a fix so you don’t have that annoying extra click. If there’s only one empty spot it’s assigned automatically. Give your browser a refresh to get the update.

The Flip Frenzy in “old” Match Play was this totally special section of Match Play where everything was built custom. It made it difficult to maintain and improve. With “new” Match Play Flip Frenzy tournaments use the same standard components as other tournaments. In a few cases this may result in extra clicks, but the advantage is that I can actually improve on the experience over time instead of everything being stagnant forever

Interesting situation this weekend regarding final standings in finals:
https://matchplay.events/live/g0dv9/standings

Colin, Steve, and Ron all had 5 points in the quarterfinals. Adam M had 6 points but did not advance and did not get in a tie breaker. Ron was in a 2 way tie and Colin and Steve were in a 3 way tie. Colin got second in the tie, Steve got third. Ron did not win his tie breaker. The final results show Colin at 10th but Steve and Ron tied at 11th. Adam shows as 9th.

So the ties were played out? If so, who was the third person in that 3 way tie?

Same question for the 2 way

Found it. Seems to me there was a 3 way tie with 5 points that did not advance. could’ve been played out to break, then it would’ve just been straight how they finished in the tie breaker game. If it was automatically broken, maybe qualifying seeds broke them?

Number 3 is the correct behavior. Ron and Colin should’ve been tied in the final standings. But this behavior is rather difficult to fix.

So when you hit the case like here where there are two tiebreaker matches with different number of players then the standings will be off like this.

I guess I should clarify my usage of “correct”. Correct is of course whatever the rules of this particular tournament says. When I said “correct” above I meant “this is the behavior I wish I had implemented in Match Play but due to technical constraints, I have been unable to”

Ran The Next Inline Tournament this weekend - Target, Strikes, Matchplay and group elimination and the new Beta of matchplay just rolled and rolled, grabbing scores from Scorbit was awesome and made running the event easy! was also epic to share the Scorbitvision scores so people on stream could keep an eye on other games. 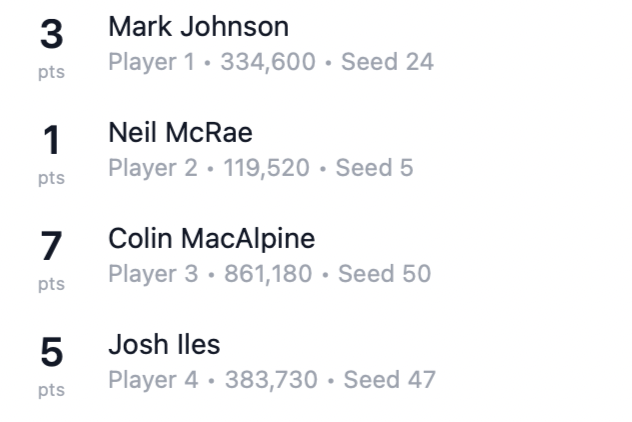 Yeah. This is gonna be a game changer. RIP my wallet when this is live and u need like 12 scorebits haha

Just curious if there’s any traction on having Next Matchplay have win % as a FF option?

vs. most wins. Some people seem to prefer this metric and there are pros and cons to both. Would be nice to be able to choose.

I haven’t made a decision on that yet (vote early, vote often for your personal favorite ideas). But! The entire purpose of creating the new version of Match Play is so that I can make future changes faster and easier.

It’s not completely up to date but I have been marking ideas on the feedback forum as “in the beta” for those ideas I have been able to add to the new version. It’s a nice list of stuff: General: in the beta (13 ideas) – Match Play Events feedback forums

I’ll do another round of updates on the feedback forums soon. If you haven’t noticed the new version has some user profile improvements like you can show your initials, location and show a flag (even US state flags!)

I came here to suggest the win percentage option for flip frenzy, hopefully it’ll get added!

I’ve had players be unable to claim their player in matchplay, because they are not registered on IFPA and do not have an e-mail address in that system. It happened after I added IFPA #s to those people’s profiles so it was easier to report results. Sorry, I do not have the exact error message offhand.

Anyone else have this issue and is there an easy solve for this?

You have two avenues:

The player can use the new version of Match Play to attach an IFPA number to their account:

That process may fail if their IFPA number is very new. For reasons unknown to me the IFPA website refuses to verify IFPA numbers until the player has had the number for a while (I don’t know if it’s based on time or number of events).

If it fails you (or your player) can either shoot me an email at play@matchplay.events and I’ll attach the numbers manually. I’ll need to know the player’s email and their IFPA number.

Or! You can edit the player on your side and remove their IFPA number. If the player doesn’t have an IFPA number then it can be claimed by anybody.

During Flip Frenzy / Pinball Pinball Pinball events using Matchplay we are finding that many arenas are often used more than once while some dont get used at all. Can the software be modded to use all arenas in the bank before reusing one of them? Didnt see a setting in the software for this format to do so. Venue has 50+ arenas and about 20-30 players average. One example event: Nudged Underground Flipper Frenzy 9/20/2022 • Matches • Match Play Live