Lyman confirmed that this was unintentional and that it was a result of the ball search kicking in at just the right moment which does a single magnetic pulse as opposed to a full activation of the magna-save.

It’s still cool as eff. We’ve seen this used before in the TZ upper playfield. Definitely can be used as a skillful maneuver instead of just getting lucky that a magnet happens to throw the ball to the top.

My thought is that it would be advantageous to see a magnetic pulse like this used for more skillful purposes, especially where most of the action happens in the flipper area. Maybe a player controlled magnet at the apex of each flipper with maneuvers such as this opening up the door to new possibilities of what can and cannot be done at the focal point of a pinball machine. I can picture cradle separations being more interesting

What do you guys think? Am I just overreacting to a goofy pinball moment? Could something potentially awesome spawn from this?

Why did the ball search kick in here?

They think it was because the shooter lane switch was flaky

Yeah we could have player-controlled magnets over the inlanes, and separate flipper buttons for them!

Truth is, barely anyone used or understood magna-goal. Even now. I don’t think there are going to be any new magnetic pinball skill moves, but would happily be proven wrong

Well, as the person who was stream monstering about magnets, you can lead the charge.

I saw that. I thought it was the result of a half flip(like a tap pass) but on the magna save button. Ball search makes more sense. There was definitely a credit dot on the WCS all weekend, so it very well could’ve been the shooter lane switch.

Dang that is a cool video.

All I know is that if few of the top players want to use a player-controlled magnet, there’s not much hope for the general community wanting to do so

It would be pretty cool if you got a “magnet transfer” (from one flipper to the other) to start the ball (and maybe earn more later). If newbies knew it existed, it wouldn’t take long before they started trying to cradle just to see it in action.

It is a ghost switch issue. I just took a look at the switch matrix for the game.

The Magna save is activated when the ball hits the Striker target by the pop bumper just before the ball returns to the left flipper. Or as far back as the closing of the Right return lane.

It is likely a problem either switches: Kickback upper, Left eject hole, Spinner or Travel lane roll over - bypass-shorting both switch and diode (bare wires touching) or stock closed switch with a shorted diode. The spinner could be stock closed as sort of normal game play.

Or Left ramp entrance bypass-short (or stock closed) switch with Lock mech low (there is a ball in the lock) having a shorted diode.

Could also be a problem within the trough opto board logic - though less likely. Was the Left eject hole firing on its own on this game? With no balls in the saucer.

Someone should post the video on pinside. Lots of modders there.

Now I’ve watched the match I’d say that a ball saver is likely. And not necessary a ghost switch hit for the Magna goalie button. Very subtle timing.

Though I am intrigued by the points that Adam was rewarded with the ball in the shooter lane.

All this could also be spurious gound short of switch column 2.

Though I am intrigued by the points that Adam was rewarded with the ball in the shooter lane.

In the longer tourney video, you can see the right sling shot firing on its own a few different times.

At one point, a player was awarded “Penalty Kick” as though they had shot the Striker hole, while the ball was still in the shooter lane. Same issue? 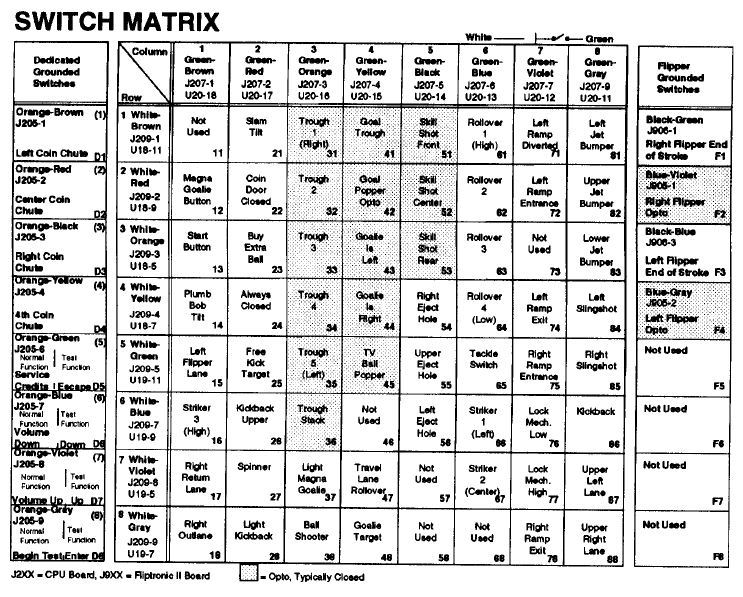 Oh dear, oh boy. The conspiracy on what was wrong with this game is becoming a hole I dug myself into.

However, with Goal popper being normally closed it will not be sensed active by the game via column 2 which could explain the other ghost switch detections.

Now I suspect that row 2 suffers spurious short to the GI or row 6, 7 or 8. Or a generally flaky 12V digital power supply which will jeopardise everything an cause all sorts of wonderful misbehaves.

Ok so Ghostbusters is going to have magnetic slingshots. I’m definitely interested to see what this will do. Now if it could only be player controlled

Me too. On paper, it makes no sense. Two magnets and the circuitry to support them are way more expensive than standard old school sling mechs. Doubt we’ll see magnetic slings standard on all future games. Will definitely be interesting to see how they’re implemented. Since they’ve officially been announced, it seems safe to assume that they’ve proven the concept.

They tried doing magnetic slings on Star Wars: Episode 1 and it was abandoned during development. They just didn’t have the action you want on the lower playfield. Interested to see how they’ve improved on this in the intervening 15(!) years.