If you’ve been on the fence about going to Houston Arcade Expo in the past, now is the year to make the journey!

But I know most people on TF are tournament players, so I’ll get right to that. I am very excited to announce the format of this year’s touranament, the Space City Open!

All this while keeping the matchplay format that everyone loves! The very basic description of the tournament is there will be four distinct qualifying sessions, two on Friday 11/15 and two on Saturday 11/16. Players may play in up to two of these sessions, and can choose which is most convenient for them. Each session will be around three hours long, limited to 52 players, and will feature 6 rounds of group match play. The top 6 players from each session will qualify for finals.

The price for playing is $25 per session. All ticketing and waitlists will be handled on eventbrite (https://www.eventbrite.com/e/space-city-open-pinball-tournament-at-the-houston-arcade-expo-registration-68562110117). Tickets will go on sale September 22 at 12pm Central time.

We will also have a separate women’s tournament, and will announce details for that tournament shortly.

You can read the full details on the website at http://www.arcadecenter.com/index.php/pinball-tournament/. Hope to see you all there! 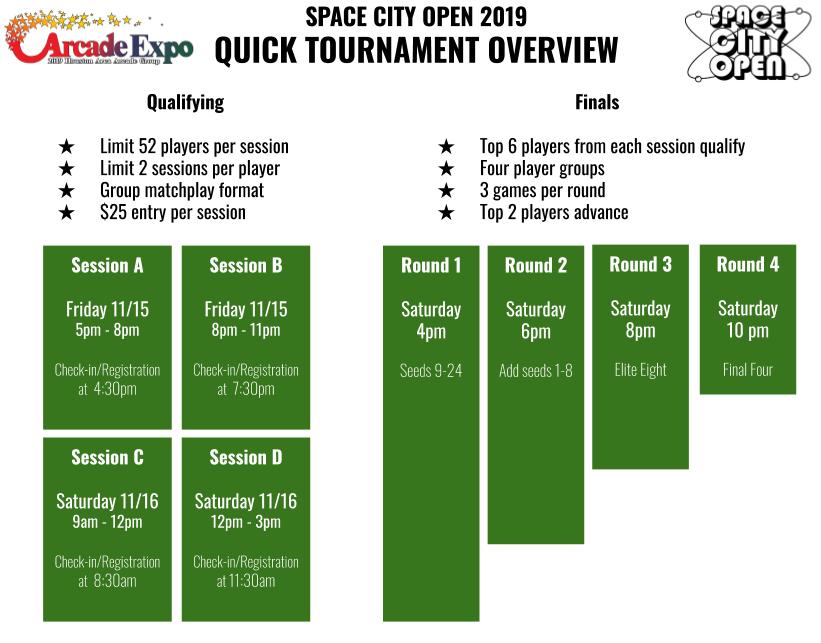 Will there be a player list available showing who has signed up for which session?!

When players qualify in the top 6, will they be barred from playing in other sessions?

What are the division cutoffs/restrictions?

The detailed answers to all your questions are on the website!

Makes sense not to bar them from other matches as assumption is their finishing spot also ties into their seeding. Kind of matching how TPL is done.

Sorry for the questions and hopefully they aren’t seen as being negative. Just trying to figure out if I’m interested in going. I know the atmosphere has changed the passed year or so to where people want to see more randomness in whom’s making finals and winning tournaments (at least locally) but there is a pretty big feeling of possible randomness and it’s hard to spend $300+ (tournament fee’s, hotel entry, etc) when you aren’t real sure about things. For instance, going and playing well and only losing a couple games to people like you, Robert, Steven, Colin, Mark, etc (top 100’s in the world) while someone makes the finals by having 1 more win and never playing a single top 100 player the whole event/session. I’ve seen it happen quite often now that we’ve gone to these random types of things locally.

top 6 out of 52 but you only play 18 people at random? So it’s possible some groupings could have 4 top 100 players in them while other players may never see a top 100 player?

Just to clarify, it’s technically “balanced” so you are unlikely to play a player twice in the same session. Everyone has the same probability of playing a top 100 player. It is not round robin, so you won’t have to play every other opponent. This is true of practically every matchplay tournament (e.g., Pinburgh has 1000 players, and you will only play at most 30 opponents in qualifying).

3 person groups. Would you only get 2 points for getting first instead of 3?

If you qualify 1st in your first session, are you forced to play in your second? If not, can the player chose to vacate their spot and get a refund since they can’t increase there seeding?

You would not be forced to play in the second, however, the cutoff for refunds on pre-registrations is October 15. I expect most people will still want to play in the second session to get more practice time on the machines. Alternatively, you could pre-register for one session, and if you don’t qualify, walk-up register for a future session. Obviously this carries risks if the future sessions are all sold out.

When you say random games. Does it at least swap era’s? Or is it possible you play 5 EM’s and 1 modern (or visa versa). I know the software shouldn’t dupe players up on games but my experience (has been confirmed by many) is the software doesn’t work well in that way. Most recently confirmed at Bat City where several players (myself included) got stuck on a lot of the same games.

Technically it is “balanced”, so you will be weighted towards machines that you have not yet played. This is not a guarantee that you won’t get the same game multiple times, but it is unlikely. Given this new format, the game lineup will be weighted heavily towards modern machines (alphanumeric and newer). They will all be playing tough, but fair. The games we’ve secured so far are posted on the website. Flash Gordon is listed right now, though that will probably get replaced as we get more donors (I have it listed because I’m bringing it no matter what).

Sorry for the questions and hopefully they aren’t seen as being negative.

Thanks for asking, these are helpful for knowing what needs clarified on the website.

I know the atmosphere has changed the passed year or so to where people want to see more randomness in whom’s making finals and winning tournaments (at least locally) but there is a pretty big feeling of possible randomness and it’s hard to spend $300+ (tournament fee’s, hotel entry, etc) when you aren’t real sure about things. For instance, going and playing well and only losing a couple games to people like you, Robert, Steven, Colin, Mark, etc (top 100’s in the world) while someone makes the finals by having 1 more win and never playing a single top 100 player the whole event/session. I’ve seen it happen quite often now that we’ve gone to these random types of things locally.

If you are interested in saving money, consider bringing a game for use in the tournament. Bringing a game will get you free entry into the show. We are also refunding tournament entries for game donors this year.

If you are worried about other players in your session, you are welcome to try and sign up for sessions they have not signed up for. The player lists will be published as people sign up. Of course, this carries the risk of the session selling out before you have the chance to sign up.

This tournament is as much a test of skill as any other. I’m confident that after the dust settles, the 24 players that qualified for finals will have all earned their spot.

As far as randomness goes, I’m not sure what to tell you other than this is just the nature of pinball, and more generally, life itself. There will always be some element of universal randomness conspiring against you, be it your opponent selection, game selection, feed out of the pop bumpers, etc. etc. I can 100% guarantee that in the long run, you are getting screwed just as much as everyone else.

Thanks for the answers to the question. Couple of follow-ups/clarifications:

Not really. Most I have seen are SWISS or a variation of that format when you wont play against most of your competitors. I don’t think I’ve ever seen a match play at anything other than league that is random when you have no possibility of playing so few of your peers. Pinburgh was a bad example as it isn’t random seeding at any point. I believe that is because of what I’m talking about as well.

This was more a question based off value of the money spent vs being able to afford things. Good option for those that are pinching pennies. I just can’t justify anymore for my own reasons most notable the TPF METLE issue.

Not really. In sports skill creates your own luck and in life hard work overcomes bad luck. I’ve got no issues getting beaten by the game due to bad bounces and such but randomness with groupings is much harder to swallow. Since College Football is about to start, I’ll provide an example. Each team has different schedules and nearly every year there is a team that has a better record than another team but gets ranked lower due to strength of schedule. It’s a big part of those conversations now at the playoff nominations.

Isn’t this before TPL? If so, and since I’m sure the Leaders of that will all see this, I urge you to have TPL qualifying before the 15th or push back the refund date so that people can plan accordingly for those two events.

You always put on great events and I’m sure everyone will have fun but I also wanted to provide some feedback/concerns to help make this the best it can be for everyone and also help others decide if they want to attend. I would strongly consider SWISS format for these sessions to help due away with that strength of schedule challenge. If you were playing even 60-70% of the group, so be it as the luck of the pairings would mostly equal out but at only 35% there’s going to be some hard pills to swallow.

Allow me to point out that the proposed scheme is very similar to that used for the past several years for qualifying at the NW {Tacoma} show. The main difference is the pre-registration aspect; in Tacoma, you sign up onsite, and only can do a second session if you fail to qualify during your first.

The expected game list is looking awesome! Given the donors on this list, I have high confidence everything will be playing phenomenally too. We’ll be revealing the last one or two games soon. 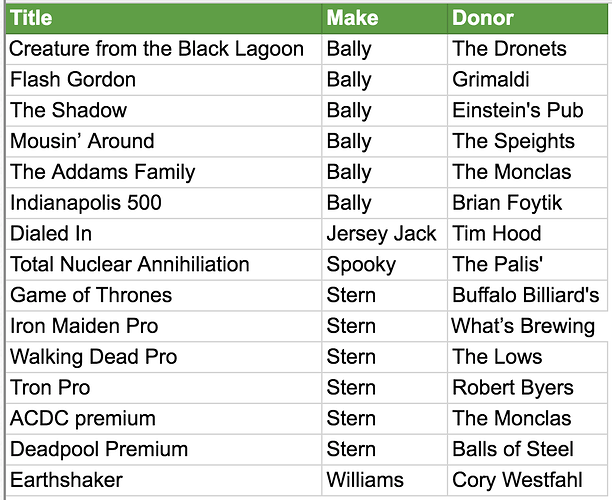 The price for playing is $25 per session. All ticketing and waitlists will be handled on eventbrite. Tickets will go on sale September 22 at 12pm Central time.

Can you sign up both yourself and someone else who isn’t able to be online at zero hour? If so, do you need anything beyond their name and IFPA #?

Can you sign up both yourself and someone else who isn’t able to be online at zero hour? If so, do you need anything beyond their name and IFPA #?

Yes, you can sign up someone else (Up to 5 unique people per session). The only other thing you’ll need is $

Come Thursday night…Pinball Profile World Tour stop at nearby Einstein’s Pub…tons of pirzes to be won!!! Details to follow soon on IFPA Calendar!

Yes. Please come to up my WPPR amount!

Reminder: Tickets go on sale two weeks from today! Get your F5 buttons tuned up and ready to rock!

And it gets better! There will now be a Women’s tournament hosted by the Belles of Space City on Saturday!

The Belles of Space City will host a three strike women’s pinball tournament at the...

T-Shirts are now available for pre-order. Pickup at the show! 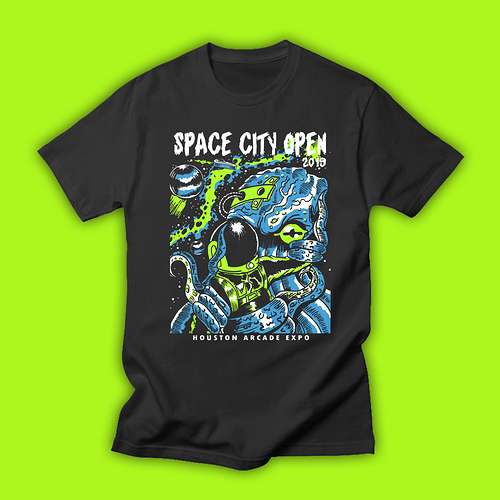 Tickets go on sale in less than 1 hour! https://www.eventbrite.com/e/space-city-open-pinball-tournament-at-the-houston-arcade-expo-registration-68562110117

The initial rush is over! 82% of slots are filled, but I doubt for long. Session A and D nearly gone

Quick clarifying question as I don’t see it spelled out. Could be missing it though.

Since people that qualify in an early round are allowed to play in a later round to improve there seed. If they do improve there seed, where is that vacated spot filled from? Assumption is from the round that they are vacating but wanted to clarify.

Example:
Colin qualifies as 5th in Round 1. I qualify as 7th in that same round. Colin then plays in round 4 and qualifies 1st and thus improves his seed. Would I then bump up to 6th as I was next in line for the spot he is now giving up (the 5th place spot) or would the 7th place person in round 4 move up? 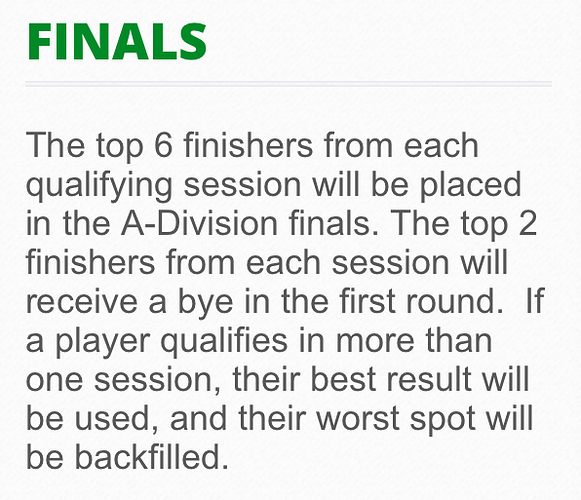 The players best finish is used. In the scenario you describe, you would be bumped up in the first session.