Help with Wheel of Fortune software it's all in bits!

Can anyone help me get this wheel of fortunate software together? 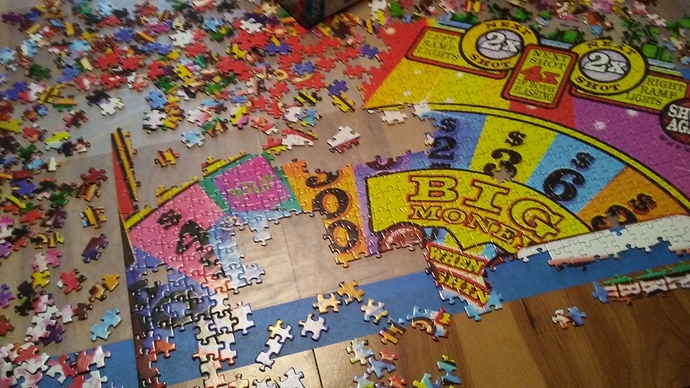 In all seriousness, I enjoy the game as-is but it’d be neat if the game code was independently “finished”. Maybe in PROC… The issue would be recreating everything (including the thousands of puzzles). It’d be massive.

The 6.0 tournament rom floating around had a new rule pertaining to the Bonus Round modes, and in Pinball Browser there’s mentions of Sturgis, Hawaii, and Area 51 Trip Multiballs.

Fun and deep game overall regardless.

I haven’t researched the tournament rom at all because it only supports free play…so I can’t use it in my machine (which is on location).

so if you don’t have that ROM is it not ‘fair’ for tournament play? we’ve been considering it for City Champ but it sounds like only the free play ROM is fair enough for a Circuit event? I know it was at INDISC before but those games were on free play vs coin drop at City Champ…

Can’t seem to find the release notes I got with 6.02 but it was mostly polish type stuff. Maybe some Bonus Mode changes. The part that matters to tournaments in 6.02 is that in tournament mode all players will get Trip MB after solving the second puzzle. The pop bumper value bug is still there though so the game should be turned off at the end of every game to reset the value. And yes it is Free Play Only.

so if you don’t have that ROM is it not ‘fair’ for tournament play? we’ve been considering it for City Champ but it sounds like only the free play ROM is fair enough for a Circuit event? I know it was at INDISC before but those games were on free play vs coin drop at City Champ…

I use it for my monthly leagues and tournaments. I didn’t even know about the pop bumper value bug, but the biggest things with the standard code are:

Since the mode scoring can be really unbalanced as well (primarily a well played Ramp Rampage), it’d be nice if that was selectable, or in a fixed order for all players…or perhaps have the rotation move more slowly so you at least have a chance of timing your shot to start the mode you want.

It’s not an absolute no-go, but if I were running a large tournament, I’d be crossing my fingers that no one gets a huge Big Money award at a crucial moment. Or use the Tournament ROM and do honor system payments…that’s been done at the Lyons Spring Classic in the past.

Never heard of a pop bumper bug. Did you mean the Trip MB bug? Trip MB jackpot values don’t reset unless power is cycled. That bug is definitely on version 5.0 and lower. Not sure if it was fixed in the ‘Stern’ 6.x version.

If you use 5.0 or lower (and want to keep cycling power), I believe if you set it to tournament mode, the second puzzle will award a Trip MB every time. Not 100% sure on that. The ball in the shooter lane award for Big Money should never be considered an EB IMO because bonus isn’t collected. Not a real EB.

Yeah I’m not certain on the value holding bug all I know is it should be turned off between games. The trip MB as puzzle 2 in tournament mode is only on the 6.02 as far as I know.

Edit: As far as I know 6.02 code plus turn it off between games and you are good to go tournament wise.

Doesn’t 6.02 also make Wild Card awards occur in a set order for each player as well?

I haven’t played anything besides 6.02 for years, and i would assume that tournament mode on 5.0 would do the same, but the three Wild Card awards are: 10X bonus, solve puzzle, and then light specials on the prize “row” for all 3 players… The main crux of a solid qualifying game on tournament Wheel is using the “solve puzzle” award at the right time to complete your second puzzle and have Trip MB available - you can also do that during the normal MB, if setup correctly, for a super-stack. Note that 6.02 also has the green targets for add-a-ball in either MB, which is not only hard to do, but takes away the ability to stack in normal MB if you start Trip MB first. Both 6.0 and 6.02 fixed the progressive-trip-JP-value bug, so there is no need to power cycle the game when using these ROMs. The other nice change in 6.02 is it fixes the annoying “Free Spin” bug. It also allows you to replay unfinished modes, and awards a +1 bonus multiplier on your puzzle bonus for completed modes…

It’s an awesome tournament game using 6.02, and well worth the “price” of lost coin drop on free play.

I’m pretty sure Tournament mode on 5.00 does not standarize which puzzle Trip MB is lit on. I’d have to re-check this as I always install 6.02 before any serious tournament it’s used in.

I’m pretty sure Tournament mode on 5.0 does not standardize which puzzle Trip MB is lit on.

You’re probably right. It’s been a while. Easy enough to check. The Trip jackpot bug being fixed in 6.02 is great. As Adam said, it is an awesome tournament game.

Seems like Keith added a few ‘different’ puzzles in 6.02. Anybody remember any of those?

Not sure about new puzzles, but I think in attract mode there’s a screen which reveals the answer to last puzzle you’ve played, in case you didn’t get to finish it.

6.0 was the first version that supported a tournament mode. Lots of work was done after that before I got sacked, then someone compiled the latest together that had all the newer work in it, and that is 6.02.

The mode stuff is basically there’s a common goal of points (starts at 5M). If you finish a mode, the goal goes up, if you lose a mode, the goal goes down. If you don’t finish a mode, it stays in the rotation, and if you play it again it scores 2x, and if you fail and play again it’s 3x. If you don’t hit the goal after 3x, it stops trying. Winning a mode also gives you a winnings x for that ball.

The puzzles I don’t think were ever changed after initial release because they’re “encrypted” in the ROM, and that was kind of a PITA to do.

I remember lots more pinball related puzzles being added. One of the 6.x versions has one or two really weird ones. Probably not suitable for public consumption. I can’t remember what they were. No swear words, but weird. If I have time, I’ll see if I can see them in the pinball browser.

Do the modes immediately end if you surpass the goal, or do they continue until the time expires?

Is dump,dump, cash in at 3x legit?

Sure. Requires some excellent timing skills or a shit ton of bonus modes, but sure.