Ryan made me post this here as I’m the half of the podcast that plays competitive pinball and he thinks we are all nuts for playing against each other instead of going for wizard mode. We do both Ryan!! Plus I’ve met a few of you during my recent-ish travels to PAPA and INDISC.

We started this podcast as our mates from the Pinheadz Pinball Podcast took a break (they’re back…kinda) but we are having fun doing it and hope it’s another source of frequent (and balanced) news in the pinball world. I’m trying to get Ryan into competitive pinball and he’s trying to make me understand how machines work and we see things quite differently…but the same. Pinball!!!

Frequency: Weekly. Released Monday night (Monday morning in the US)
Length: We try to keep episodes under 2 hours but there’s just so much to talk about.
Content: All things pinball! We will be covering news from all manufactures, tournament news, interviews, reviews and opinions on new/old games. (But mostly we wait for machines to arrive months after they do in the rest of the world and at significantly inflated prices)

Where to find us and how to listen:

Or search for Head2head Pinball in iTunes or Stitcher.

Sorry. You couldn’t be more wrong.
Pinball strip club is a Bayside Pinball Club initiative to demonstrate how to tear down or ‘strip’ a pinball machine.
I think you have your wires crossed.

Why did the podcast post a stripper photo on Pinside and Instagram? That photo appears on Pinside just below a wonderful photo of a girl working to open a pinball machine. Putting these photos next to each other sends a terrible message. 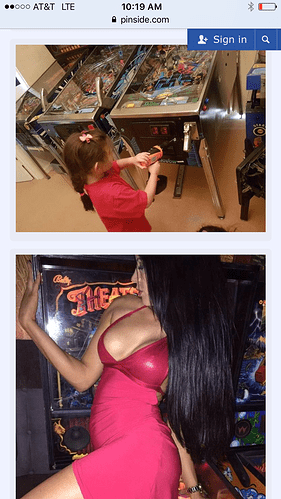 Not to mention their flier for the event which shows a woman wrapped around a plunger rod as if it was a stripper pole.

Which event is that? I didn’t see any event flyer.

The event is the Bayside Pinball Club’s “Strip Club” event, as referenced above. I chose not to upload a photo of the flier just because I don’t think it is necessary. The description does just fine.

I did some searches and can’t find the flyer.

The pictures uploaded in random order and pinside only allows you to edit posts up to 24 hours after they are posted.
However, why is the picture of my kid drilling out a lock wonderful, but a picture of a female sitting on a pinball not? If the female was my wife would that then make it ok? If the female was 50 pounds heaver would that make it ok?
If it the fact that she is an adult entertainer? Where is the line drawn? What is the actual issue here?

I am just posting up pictures relating to anything we talk about.
Martin did not post pictures on Tilt Forums.

When Elvira 3 is shown, is it ok if we post pictures of the playfield? I am almost certain Elvira will have more cleavage than the picture of the female sitting on Theatre of magic.

PAPA has tutorials of Scared Stiff. A game where Elvira cracks jokes about headjobs and there are plenty of other sexual jokes. Are people offended by this?

The Bayside pinball club held a FREE event to help people learn how to strip down a pinball machines. FREE! A full day event like this usually costs over $500 AUD. We can get the 15 people that went to the event on here and they can talk about everything they have learnt and how the owner is taking time out of his weekend to improve the hobby with absolutely NO financial gain. In fact there are costs involved with running such an event and it was taken out of his own pocket. OR we can sit on a forum and argue that a logo of the small event on the other side of the world is a female (or a male right? cannot make assumptions these days) on a plunger is ‘super gross’.

I saw a Facebook post about people being offended by “Finding Pinball’s Bottom” was the title of The Pinball Podcasts latest episode. The reason was that it was in the same episode they talked about the JT arrest.

My point is that people can be offended by almost anything. Different people have different lines that are crossed depending on their religious beliefs, their childhood and their views on the world.
I am sorry if your line has been crossed, but that doesn’t mean that everyones line has been crossed.

We are bombarded almost daily with what many of would regard as highly negative and offensive messages from your own President - I think most of us are adult enough to withstand them and make our own judgements and likewise with any ‘message’ imputed from two photos (that you have posted out of context - they were part of a series and relate directly to the podcast material).

Given the recent threads we have had going here around the subject of sexism in pinball and the treatment/feelings of female competitors, I would hope that both the podcast and event in question would have had some insight as to why more sensitivity is needed in these matters. I understand cultural norms are different everywhere, I encounter this often in the global open source software community often. However that doesn’t mean that either of these norms or their concerns are ridiculous or worthy of being dismissed. I’d hope, as has been pointed out in other threads, we can take those concerns seriously and make an attempt to understand them rather than simply waving them off or getting defensive.

For me specifically, the issue that really offends me as much as the constant generic sexualization of women in pinball is that we have apparently not as a community progressed past the humor of 12 year olds.

Many of the other issues brought up in these responses are addressed in the Code of Conduct (http://tiltforums.com/faq) or in the sexism in pinball thread (Sexism in Pinball: Practical Examples) both of which are excellent resources.

This all said, I appreciate that all this content stayed where it belonged and didn’t migrate here (aside from Bowen’s image pointing out the problem.) I hope that was an acknowledgment of the code of conduct we have in place here, which is appreciated.

You’re free to run events as you want to, but there are certainly people that are offended. For every person willing to post publicly that they are offended, there are probably several more that are offended and likely avoiding your event because of that without saying anything. Pinball has a history of objectifying women, but that doesn’t mean that it’s acceptable. We should strive to do better and make pinball a more inclusive environment.

I’ve emailed the pinside mod team to separate the images if its possible for them to do so. Martin won’t post any pictures on tilt anyway.

I am legitimately unaware of recent events regarding sexism in pinball. I am not really involved in the tournament scene so I do not frequent Tilt forums because this is what the forum revolves around.

In the example thread you posted, the OP used the words "A great rule of thumb to consider is:"
Check out the believed origins of that saying. Most believe it comes from the fact that if you beat your wife with a stick that has the width smaller than your thumb it is OK. I am surprised that so many people don’t know this but I don’t even bother bringing it up because I know it is not their intention to make light of physical abuse.

In Australia adult entertainers are not forced into their line of work. They choose to do it, so I don’t personally see an issue with that image but respect that tilt doesn’t want those pictures posted on here.

@ Jared. It is not our event. It is an event that I personally didn’t even know was on. Actually it was not even advertised to the public, only in a private email to the few members of the club. There are female members of the club and I just checked the email invite and the logo was NOT even in the email sent. It was just a piece of paper sitting on a desk. I was emailed 15 photos to include and that was one of the 3 that was chosen. No one at the event was offended. It didn’t stop anyone from coming. If the owner of the event wants me to remove the pictures I 100% will.

First, I think the idea of teaching people more about pinball maintenace is exceptional. That said, I think it’s pretty simple why people would take umbrage with the way it was presented… the stripper photo pretty cleary says “Hey DUDES, come hang out with a bunch of other DUDES and learn about tearing apart pinball machines. We can share lots of DUDE pinball innuendo and if some non dudes show up, we’ll try not to stare and be gross—but no promises.”

On the other hand… the kid photo says: “Hey pinball enthusiasts, come hang out and learn about working on pinball machines. It’s suprisingly easy, even a kid can do it! In fact, bring the family, it’s an activity everyone can learn to enjoy and be a part of.”

I feel like despite whatever differences there may be between the social and cultural acceptance of sexualization and/or sex work in different societies, the subtexts of these two images in the context they were presented, are going to be pretty obvious across them. We need more of the kid photo vibe in pinball IMO and you’re not going to find many here who disagree.

To reiterate, the maintenance/tear down session has NOTHING to do with the lady on the Theatre of Magic machine. That club is in a completely different state. None of us posted that pic on this forum.
I can promise you that there was no DUDE innuendo and no double entendres were even whispered. The most risqué we got was a spot of flame polishing. No Benny Hill music was played, let alone whistled.
A mascot was produced for the private gathering and included on the front page of a prolific tear down manual produced by the organiser. I reckon it’s a ripper - others can disagree.
But we’re really glad our friends across the world are looking after our moral responsibilities.