I had a situation recently that I hadn’t really considered in the regular Flip Frenzy events I run. What’s the most fair way to handle a player that leaves early? I don’t really care what the reason is, but if a player is at, say, +4 and then leaves with an hour left I’m not really inclined to let them lock in at +4 when the players still remaining are risking a + or - with each round.

If a player shows up late, that’s not a big deal to me. The format allows a little flexibility for me for a reason. I don’t mind if a player joins late after getting stuck at work longer than they expected. Add them in, join the queue, away we go.

If a player leaves and you deactivate them, they are locked in with whatever +/- they have. If you leave them in so they can naturally decay in points, somebody is getting a free win each cycle and that isn’t going to be balanced over the whole player pool, and so it would be fair.

I suppose I could deactivate them and then adjust them down with each round they missed after they left, but is there a “left early” way to do this already within Match Play?

Great question. Definitely deactivate them, then at least charge them with a loss for each round they are not there for. Can’t think of anything better. So I think that’s a good idea. Not a huge fan of leaving them in and allowing byes. Could end up not being very fair depending on how things are going.

I don’t know of any way in matchplay to deduct them a game each round outside of manually adjusting their win loss at the end.

Yeah, I had deactivated them and didn’t think much of it until I was driving home. I’ll have to update my format explanation to add that part. I don’t expect to see it often, but if it’s in writing I can point to the process.

It seems like the MatchPlay interface has you covered if you wanted a “if you leave early you’ll be marked as a no-show for each round”.

Keep them in the tournament, but mark them as “Player not present?”. They’ll get a -1 and get thrown to the back to the queue. The queue will likely cycle quickly so they’re going to take a lot of losses, especially if they leave super early. 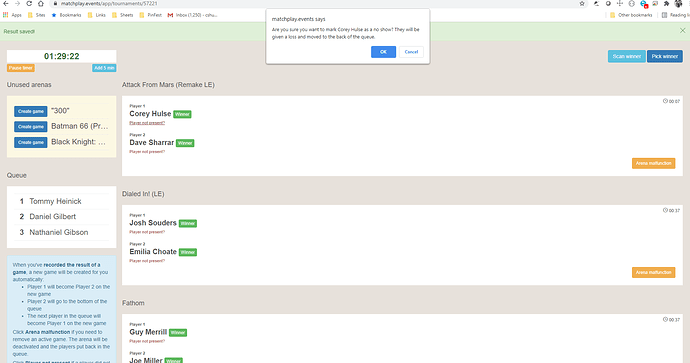 Will doing this replace the no show with an actual player? Meaning the present person doesn’t get a free win? If so, that’s perfect!

It will, but you’ll get less jank in your tournament if you deactivate the player and use the “adjust points” feature to give them all the minus points in one go at the end.

But either approach works so it’s really personal preference!

This only really matters if you are using net wins as your ranking metric (wins - losses).
That’s why I prefer to use total wins as the main ranking metric with net wins (or percentage wins) as a decider.

Having ran a few of these format comps, I think I’ve only ever found 1 which created different results at the top of the field.

This only really matters if you are using net wins as your ranking metric (wins - losses).

Shouldn’t even be allowed to call it a Flip Frenzy if you’re calculating wins minus losses. That’s just a heads-up tourney with an efficient queue.

That’s just a heads-up tourney with an efficient queue.

I don’t want to have to type this out when describing the event. Haha. Unless you did flip frenzy when they first started and before matchplay picked them up, no one knows the original format anyway.

Unless you did flip frenzy when they first started and before matchplay picked them up, no one knows the original format anyway.

Thanks to all you spineless american TDs who gutted everything fun from a wildass aussie innovation!

Yes, I’m dying on this hill.

If going to total wins, would this be a proper rule to accompany things?

“A competitor if free to concede a match or end a ball if they desire to do so. However, all balls during a match must be plunged, meaning the machine must be in “game over” state when both competitors leave the machine. Competitors are not permitted at any time to turn a machine on/off to reset the machine.”

To put things in perspective a little, this is a rather small local event. My stuff averages 8 players at any given tournament. I don’t see a need to have a huge list of rules for situations that I’m not likely to run into, but I know full well that low odds doesn’t mean no odds. Just trying to run a variety of enjoyable events.

Yeah the idea is fantastic for sure. I just don’t like people conceding left and right. Net wins gets rid of that.

Went to a flip frenzy where a player left halfway through and there win/loss was locked in when they left and they ended up finishing pretty high considering the amount of players in the tournament. Really turned me off to the format.

edit: that said, I like the deactivate from the tournament and -1 for every remaining round or remove them from the standings completely options

Yeah the idea is fantastic for sure. I just don’t like people conceding left and right.

Yes, but everyone’s too boring to do it the real way.

I played in one actual Flip Frenzy run by the Aussies on their custom software at Logan, amazing experience. I’ve played in a bunch of “net wins” Faux Frenzies since then. Just feels like a tournament.

TLDR: tourney people suck the joy out of everything they touch.

We had a few people here in Australia agreeing to one ball games and plunging the rest so they cld play more games and get more wins therefore we brought in the net win rule.

I played in one actual Flip Frenzy run by the Aussies on their custom software at Logan, amazing experience. I’ve played in a bunch of “net wins” Faux Frenzies since then. Just feels like a tournament.

Can you help me understand that’s different about the original Australian version? When I first started running them in Pennsylvania I based it on rules I saw outlined in Pinball! Pinball! Pinball! Tournament report and format discussion where the original post was about an event in Japan. We even gave away a shiny new pinball in the first few iterations of the event for the winner.

I was talking to a local player who also runs tournaments just to bounce off ideas. After a few conversations we got to a place that I am pretty happy with.

I was reading about “player not present” and like that it gives a -1, but I don’t like that it also sends their opponent back into the queue. Yes they break even for the round, but I’d prefer they get to play since that’s what they came to do. I would prefer the option to have it give a -1 to the missing player and also send the next player in queue as the waiting player’s opponent.

I don’t know if there are any options to change what “player not present” does, so at this point I would probably just deactivate them and give a -1 manually based on what matchplay declares as the average number of rounds.

I was reading about “player not present” and like that it gives a -1, but I don’t like that it also sends their opponent back into the queue.

I believe it keeps the other person in the match and gives them a new opponent.

I have a test here where I marked myself as “not present”. Nathaniel is my opponent. 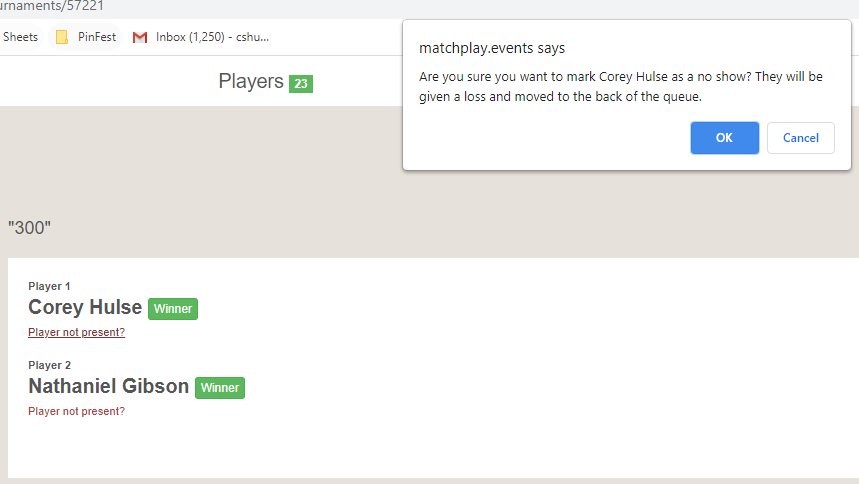 Dave is drawn from the top of queue to replace me against Nathaniel. I’m sent to the back to the queue.

Oh, maybe I misread who goes to the back of the queue. Thanks for walking through the test and pointing that out.

They go to the front of the queue is my understanding.