I’m curious how many people do them one way or the other, and if anyone thinks there’s a downside to either method.

Personally, I go with the former; if I’m going to drop catch, I leave the flipper down as long as possible, and just time a no-hold so that it’s in the right position when the ball hits it.

I’ve never been able to get the timing right on what I presume is the more traditional method of “hold the flipper up until the ball is in the right place, and then drop,” and that might consequently be why I’m a lot worse at loop passing than I am at drop catching.

I think there are a few downsides to doing it this way. If I was your pinball coach I would tell you not to do this, and I would recommend practicing with the flipper raised out of a MB scoop feed or something else reliable. There’s executing a pinball move, but there’s also executing it with more control and with a higher rate of success.

Adding the raising of the flipper as part of the whole move is extra time and extra consideration to the whole move. Plus, it doesn’t give you the extra instant to make the read to get a better drop catch, one that is more controlled and is more likely to trap. To compare this to a golf move I would say that this is like taking the Happy Gilmore swing where you plant your feet while you’re already halfway through your backswing.

If the timing of your no hold flip is so precise that this has become reliable, I would wager a guess that you can also develop the skill so that your loop passes and long hold->drop drop catches also become as reliable.

I find hold then release much easier to do, but flips to be much more useful, especially for getting a ball under control that’s bouncing around the playfield quickly. Holding seems more useful when you have a good amount of time to prepare before the ball gets to the flippers, usually when you know the ball is going to be coming back at you from a scoop or from a failed ramp shot.

I used to juggle a lot, so object manipulation is a familiar subject for me. Bringing the flipper up at the last moment possible stops the momentum of the ball, as long as the momentum from the flipper is equal. I use those to gain control of a ball that might otherwise go wild. It’s not perfect, just like my ability to catch a ball on the back of my neck, but lined up right it’s an excellent skill to have.

I would never flip to a drop catch given a choice. I learned drop catches on BOP from the ball coming from the jets: drop catch, shoot left ramp (of course). Was great practice for learning that early on.

If you’re going to flip, you might as well be trying for a live catch?

I always do the hold, then drop. I thought the other method was strictly a Jason Werdrick thing?

If you’re going to flip, you might as well be trying for a live catch?

I suck at live catches so may be wrong here, but don’t those only work from a much smaller range of angles compared to a drop catch?

I personally haven’t seen a ball trajectory that a live catch doesn’t work on. Now my rate of success is terrible but with enough tries I haven’t found a trajectory or feed that doesn’t allow for a live catch.

interesting, I’d thought they only worked when the ball was near perpendicular to the energized angle of the flipper?

So you’re saying they’d work, for instance, if the ball had glanced off the top of the left sling and was heading at about a 45 degree angle down to the right flipper?

Yep. I try live catches CONSTANTLY so I have yet to see a situation where they don’t work. If you can get a flipper on it, you can pretty much do a live catch.

However, in your situation that’s probably a text book drop catch situation so I would shy away from live catches there.

In general, I think timing for live-catches is more critical than for drop catches. At least in my mind, drop catches are easier because there is more leeway for incorrect timing. A mis-timed live-catch often ends up catastrophic; the same timing error on a drop catch is usually less serious.

n general, I think timing for live-catches is more critical than for drop catches. At least in my mind, drop catches are easier because there is more leeway for incorrect timing. A mis-timed live-catch often ends up catastrophic; the same timing error on a drop catch is usually less serious.

Agreed. The drop catch has a large window, since the ball is pushing the de-energized, but “Up” flipper bat back to its rest position. The force of the ball "Pushing the bat back down to the rest position absorbs the energy, resulting with a stopped ball. There are very easy to practice with the glass off the game. You can also drop catch from any angle, The only key is to make sure that the flipper is off before the ball hits the flipper bat.

but a live catch requires a lot more precision in timing. The force of the energized flipper going up, meeting the ball (going the other way) cancel out each other, resulting with a stopped ball on the up flipper. An instant too early or too late results with an out of control ball, probably headed toward an outlane!

You can also drop catch from any angle

Not effectively. If the ball is headed toward the tip of the flipper / center drain, a drop catch is useless.

I have been known to use the “hold up and flip at the right time” technique for live catches (I actually picked this up from @JPW way back in the 90s) but I have never done it for drop catches.

I’m a “well time flip” guy. Always tried the hold up and release bit and it never really worked out except for specific games. Get into a well time flip drop catch groove and it works on every game, all the time.

To me it almost feels like two different moves, based on some variable combination of situational necessity and/or the player’s comfort level with that particular machine.

You’ll see many highly-skilled players do the “quick flip” drop catch in situations where the decision has to be made instantly. In those situations, the “hold and release” isn’t even possible.
This is a lot easier to achieve when you’ve played the game enough that you have a good feel for speed/flipper travel on that game. Your brain knows where the flipper is going to be when up, and how long it takes it to get there, and come back down upon release.

In some situations, when the movement of the ball is mostly horizontal toward the flipper, the “quick flip” is required to get the tip of the flipper out of the way of the path of the ball.

You might also be able to apply the same logic that theoretically, live catches are assisted by the fact that at the end of a flip, the flipper travels just a tiny bit past it’s up-resting position before settling. This can dampen the speed of the ball before it the flipper is pushed firmly down into it’s up-rest position.
You might have observed extreme versions of this on flippers with worn-out mechs, where you can just hold the flipper up and it will sort of auto-live catch.

Aside from that, sometimes it just seems to be more related that player’s rhythm with the machine, and not really a conscious decision at all. I’ve personally never considered them to be different enough to classify separately. I view the “quick flip” drop catch as just a more nuanced version of the “hold and release”. I’ve definitely observed it happen in my own play, often unconsciously, and without any applicable rhyme or reason for that particular instance.

I’ve also observed myself accidentally drop-catching directly into the drain more often than I’d like to admit, which I do not recommend unless you are in a situation where you need the ball in the trough ASAP.

It is kind of interesting that the drop-catch-to-drain seems so easy to do on purpose, even though the timing is so close to that of a proper drop catch.

You can also drop catch from any angle

Not effectively. If the ball is headed toward the tip of the flipper / center drain, a drop catch is useless.

I meant that you can drop catch from different angles of approach. Here is a crude sketch of what I am saying: 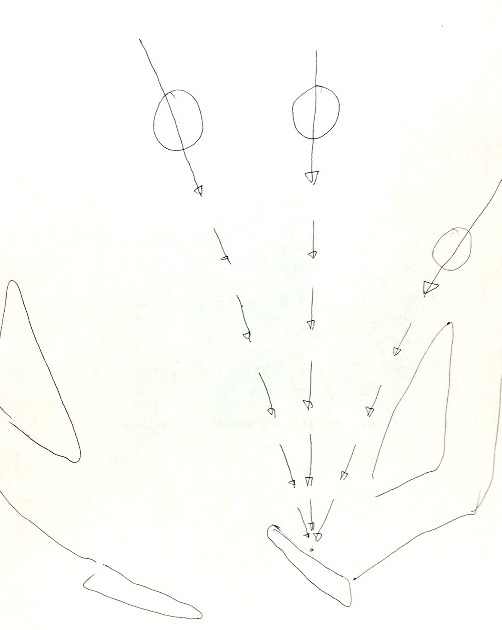 Yeah, but right orbit to right flipper would typically mean, you’ve got to directly make a shot on the fly.

Quick flips are ideal in multiball when you don’t to be hanging around with your flipper up.
They also look way cooler, you know, the attitude thing.

I don’t like to be holding my flipper up while reading the ball’s angle upfield, but in mind, my flipper is safely up and I’m thinking “DROP CATCH”. Definitely safely ahead of the moment you’d flip for a live catch.

I love drop catching towards the end of the bat and doing a quick flip away. In multiball it makes me feel like I’m Darth Vader or something and I’m deflecting all the puny laser beams.

I’m really well-practiced at the dro–oh, crap! catch. It usually involves a ricochet into the slings, a double danger slide save, and a trap up after it finally comes through the inlane.

For real though, I do far more live catches than drop catches. I should probably reverse that percentage to improve my control. I’ve just allowed myself to fall into a fairly stubborn pattern of play.

For me, it’s well timed release. (Although if it needs to be done very quickly, then it’s all in one motion).

I could be totally wrong, but it seems to me that including the flip adds a lot of extra steps…and each step is an opportunity to for the timing to be slightly off…meaning it should be more difficult to get it just right.

A well timed flip: decide to press button -> flipper goes up -> flipper stops at the top of the flip -> flipper returns to rest.

Seems like the more steps you include, the more exact you’d have to be to get it right…and the timing of each step is different depending on machine and era.