We were at Cleveland show and there were two pros there.

One you had to hit the shot just right to make it, the other was more where you thought the shot should be. Shrugs.

Deadpool bricked itself here when updating to 0.82. Had to swap in a ss card from another spike board and update that to recover.

Dpool code .84 Game reset with ball in plunger lane while going through Instant info at start of ball 2 in four player game. Also Katana lock still releases a ball when not spose to. Happened a few times during games at launch party.

We just managed to recover a “toasted” SD card tonight. Originally DP had bricked itself during update, so we pulled the card from SW and updated to DP. After copying our working DP image onto a fresh SD we had two functional DP cards, but weren’t able to get a booting SW as the update to SW would throw an error about being unable to unpack the update. I popped one of the cards into a pc and went poking around. On partition 3 found the unpacked DP update image. On a hunch (and after backing up the card) I deleted the DP directory and only then managed to successfully update the card back to SW. I really wish we’d been able to back up the SW image before the initial SW->DP hackery, but we didn’t have an SD reader on hand and desperately wanted to get our DP on

I’m kinda wondering if any of the update/boot process is documented in a public/semi-public form. Also, not to stir up too much shit, but I’m struggling to find the source for all these GPL binaries that Stern is shipping…

I’m kinda wondering if any of the update/boot process is documented in a public/semi-public form.

Game code readme file at http://sternpinball.com/games/deadpool/pro
"Installation notice:
This code release is in zip format. The zip file downloaded will need
to be unzipped before installing on a USB stick.

Update instructions:
1 - Download the zip file
2 - Unzip the file, this will create a folder that contains two files
3 - Open folder, copy only the file(s) to the root level of a USB stick. Do
not copy the folder.
4 - Power game off
5 - Insert USB stick
6 - Turn on game
7 - After game boots up it will give the option for software update
8 - Volume buttons change options for full or quick update. Enter selects the
option and starts the update.
9 - Once update is completed game will prompt user to power game off and
remove USB stick."
Also documented on page five in the manual as shown in photo. 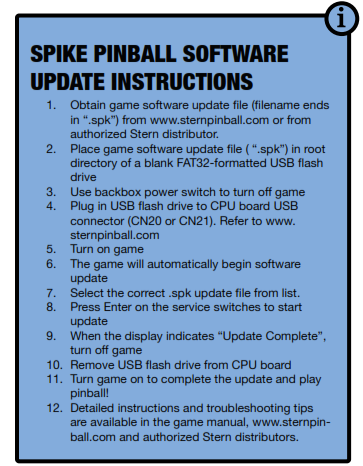 Thanks for sharing the same docs plastered all over the machine – I was more thinking about a more technical view of the processes though.

Mostly along the lines of what SoC bring-up looks like. What’s the SD card layout, is the SD card the only place the bootloader lives, or is there also some SPI flash on-board? If there is SPI flash, does it contain sufficient enough bootloader to boot from USB? I work with a lot of Allwinner chips, where that sort of info is really easy to find (http://linux-sunxi.org/Bootable_SD_card#SD_Card_Layout, http://linux-sunxi.org/FEL/USBBoot ). As I understand it Stern is still using Atmel SoCs, so odds are high with enough digging the info is available via Atmel docs, but I was hoping somebody else had already done the digging, and I could just read.

Pulling the outlane posts on Deadpool leads to stuck balls behind the DEAD and POOL targets. How should we work around that?

Just take the lower target out. Put in a “L” bracket with a blu nub on it pointing toward the outlane.

Ask @sir_tankalot or @timballs
If the info is available they are likely to have it.

Maybe this is related to the janky way our DP SD card has been updated, but I’m having issues with 0.84 rebooting while balls are trapped. Twice tonight (once during Lil DP MB, one during single ball play in a mode), I was trapped, started having a conversation, then after maybe 60-90 seconds of conversation while trapped, the game rebooted.

Anyone else seeing this?

Yes, I think it has to do with the instant info:

We had two Deadpools at our launch party. One of them reset twice, the other did not.

The Deadpool at our Pinballz launch party did not crash. Not likely to have .84 software on it yet, but possible.
It was played five times during the event, highest score was over 600 million.

@timballs we had 2 mid-game resets during he launch party in Pittsburgh on 0.84. I witnessed the first, but we weren’t sure of the cause. Then it happened to me. I had just started T-Rex, trapped ball on flipper, and wanted to go through instant info to see what status information was available. It cycled to about High Score #3 and then the game froze and reset. The other reset was DJ Riel, also a heavy control player. He thought it was definitely possible the game also reset while status info searching.

I’d agree with that.

The bizarre impulse to remove posts on new sterns

… especially without considering the repercussions. Deadpool posts prevent stuck balls and keep one of the two the right pops feeds from being a kill shot.

@timballs, how would you recommend we set this up for “hard” settings?

I’d agree with that.

the man has been converted by the EPC machine set up

Totally agree. See also: hair-trigger tilts. Drives me up the wall. The ability to know when to nudge to save a ball is such an important thing in high-level play. Removing that altogether by playing with gaping wide outlanes or “any move is a straight tilt” removes that skill vector.

Reset issue happened during finals at Buffalo Billiards today. Game released two balls from lock for no reason. Player trapped up, was instructed to drain two balls. As they hit the trough instant info was on the screen. Flippers died and game reset at that point. Scores not recoverable.