This is a wiki for common competition and tournament settings for various games.

Other settings vary from game to game, but typically toggle carry-over for Bonus, Bonus X, and other game features.

There are two common methods for tournament settings, depending on your tournament director’s preference:

Good luck. Most times when install is selected the TDs don’t even know what it changes.

I don’t think I’ve ever seen a listing of the changes for any game except maybe GOT. Would be nice to have a database of that info though. But would take lots of work.

maybe we can use this thread to source that info and compile it?

here’s the stuff I know:

Also, only 1 set of drop targets needed to light modes.

Are you sure these lists are complete for Maiden and TWD? I know TWD has more than that one change.

Only way to be sure is to restore the game to factory, do comp install, then go through the menus to see what has changed.

By no means are they complete. That’s literally the only things I know, That’s why I want to get a list like this together lol

This is a great idea. Unfortunately, I have nothing to add.

If someone wants to set up the table formatting and fill in stubs I could help fill in all the details for any stern SAM or Spike game.

Maiden also starts drops on bonus X. Biggest change is both revives are removed when one is used.

Yeah. If the form is setup I can do it for my games.

Also some games have a competition install available. Those manuals should give you a clue to what has changed, but as always, subject to change. Because the two standard settings went into all games, I wouldn’t assume either setting does anything. Install director’s cut is on all the older games too, but rarely does anything. 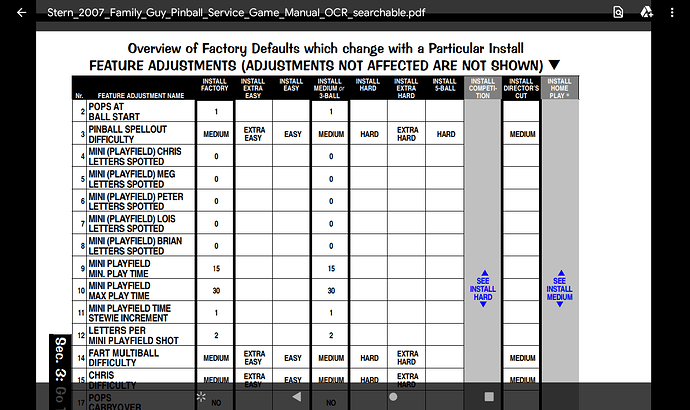 Maybe this should be another wiki page? Or is it better placed in individual game rulesheets?

I’d love to have a list that included both “Competition Mode” changes and “Competition Install” changes. I also sometimes want a list of common settings tweaks on classics games that have an effect on strategy (super bonus + GLOBE cycling on Harlem, etc.). Currently I end up downloading the manuals from IPDB.

I wondered why the debounce on GZ was set so low. I was playing with a tight tilt and getting murdered by it.

Does the debounce even really work? Our local ops sets them as low as the software will allow to try to stop me from making bug moves. I can still pretty much always make a big move for a double danger.

I was wondering about that. My GZ also goes to double danger very quickly. Then next move is tilt. Much different than my JP. Have not compared the debounce settings.

I’ve been kind of wondering exactly how the debounce adjustment works, my understanding is that it is a grace period that prevents quick, repeated closures of the tilt bob from counting as a warning. So would that mean that if it’s set to 750 ms, then you’d take one danger but if the tilt bob closes again within 750 ms it wouldn’t count as a danger?