Anyone have some basic rules for The Beatles? We have a launch party tourney tonight and I have no idea what I’m doing in the game, other than loops and skillshots.

Use the flippers to choose a mode before plunging. If you can choose the 2ball multiball mode, do that. Other than that, I got nothing. I just played it like it was seawitch and it worked out. Haha

5 mins in I have a 5-6 million game. So should be able to see most of what’s going on with this game.

Loops are way easier than Seawitch which is really nice.

All of the modes can be valuable, I’ve gotten 1M+ from the pop bumper mode for example. But they are all also dangerous. Not really any safe shots on the game. Whenever you are in a mode I would suggest shooting for what it wants you to…the points are significant. The drops do give Bonus x but bonus x is much less valuable on this game than on Seawitch.

Completing (running out of time) a mode lights a mode jackpot on the left side target behind the FAB targets. The value of the jackpot is based on how well you did in the mode.

Completing all 3 sets of drops on a single ball lights EB on alternating inlane (not applicable to matchplay obviously, but important for high score/location play).

The wizard mode can be quite valuable…if I’m close I would definitely consider timing out the last mode to try to get there.

“The theme and music is awesome!”

“yeah yeah, But is the GAME good? it looks like they phone’d it in…”

“Oh totally, the music and theme is awesome!”

I think the game is really fun. It shoots WAY better than a seawitch, and there’s enough there in the rules to make it interesting for quite a while I think.

Stern may feel they went too far in terms of complicated rules with GB and GoT. On GB especially it’s often not super obvious what to do. Granted it’s probably difficult designing beginner friendly tables without putting a giant bash toy with flaming “shoot me” arrows above it in the exact center of the table, but the rules for Ghostbusters are downright byzantine.

Played it at Pincinnati, the game is good, fun to shoot and enjoyable to play - it just costs too much compared to other good machines.

2 Ball lights on ball 3 or after you’ve completed 2 or 3 modes (seemed inconsistent, maybe there’s some other factor?)

Modes seem to be pretty well balanced and valuable

Super Jackpot value may just be your mode total? Or maybe there’s something else that effects it?

Super Jackpot is lost if you drain a ball

Left inlane flashes rollover below upper right flipper for some award, haven’t managed to hit it yet

Bonus X works the same way as Seawitch, I think spinner value does too? (four standups)

Pretty sure one of the Beatlemania awards is 2x spinners…that might light the extra spinner value light?

Fun game. I learned a great deal about it tonight! 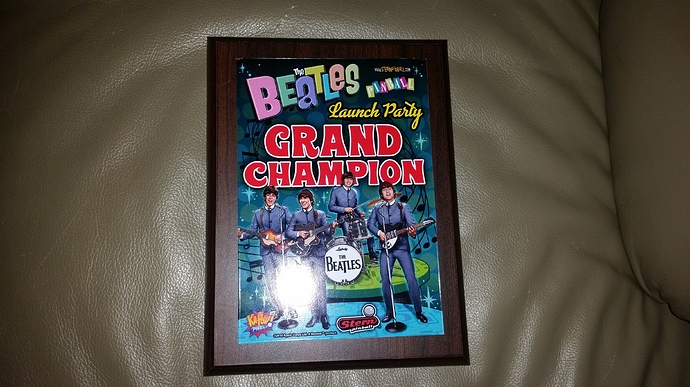 All My Lovin’ is the song/mode that is a multiball. It is the blue insert on the far left in front of the flippers. It is only selectable while in the shooter lane on ball 3. However, if you complete a mode on ball 1 or 2, the next mode will be switched via pop bumper hits. Shoot one set each of FAB and FOUR to enable the next mode, which begins by shooting either orbit. If the pops happen to stop the mode on All My Lovin, then you can have MB as your second or third mode, even on ball 1. Once the MB is played, it is not selectable from the shooter lane again, presumably until all modes are played and you start over again.

My go to strat was to start with the spinner mode, followed by the loop mode. When you are looping, you are also hitting the right spinner. However, the left spinner spins much better, even on a backhand from a trap. My 3rd mode to go for was the pops mode. I avoided the drop target mode. Of course, you take the MB mode as soon as you can get it. At the end of each mode, shoot the FAB targets down to get the SJP target behind. If you leave at least 1 FAB target up and hit the SJP, you get a 100k Sneak In Bonus. And YES, you can hit the SJP with only the center F (A) B target down!

Bonus can be significant. I think the highest bonus we saw was in the 500-600k range. Also, we saw mystery awards of 350k followed by 375k so those can also be significant. There are two Light Mystery targets, one next to each spinner. The actual Mystery collect target is on the lower left, near the FAB targets.

At the end of each mode, shoot the FAB targets down to get the SJP target behind. If you leave at least 1 FAB target up and hit the SJP, you get a 100k Sneak In Bonus. And YES, you can hit the SJP with only the center F (A) B target down!

There’s some logic to when the drops reset that needs to be learned. Sometimes I’d be trying to bash down FAB to get my Super and something else would cause all the drops to reset…

I avoided the drop target mode.

I can still do my plunge move where I like to hold the upper left flipper and bounce the ball into the center drops.

That’s about it though. Haha

Mode Super Jackpot is built mode value, yes. +100k if not all FAB targets are down. +100k per successive “sneak in.”

Star rollover, lit by left inlane, is 50k, and announced as “Secret Skill Shot,” even though it’s during gameplay and not on plunge.

BEATLEMANIA awards are not random: 1st is 2x spinners, 2nd is 5x loop, 3rd I forget.

My thinking is to start with pops. The magnet grabs most loop shots to feed the pops during this mode, and also grants a BEATLEMANIA letter. I want the first BEATLEMANIA award (2x spinners) before I play the spinner mode. I also want the second award (5x loops) before I play the loops mode. So I go pops and then drops, and if I qualify a third mode before the third ball, I’ll take spinners if I’ve completed BEATLEMANIA or 2-ball otherwise.

I haven’t seen a base bonus above 75k, and at 7x max bonus multiplier it goes to 525k. Has anyone seen more?

I would really like to know if 2x spinner and 5x loop granted by BEATLEMANIA persist after drain.

I was assuming that 2x spinner and 5x loops were superseded by the scoring increases in the modes. In other words and I have no idea if this is correct, but I thought the 2x and 5x would only apply outside of a song/mode.

There is a wonderful risk-reward rule built into collecting the super jackpot that I don’t think has been captured here yet. If you finish a song, but don’t collect the super and then start and finish another song on the same ball, when you collect the super at that point you will get a 2X SJ for song 1 and a 1X SJ for song 2. Each additional song completion added to this stack will add an additional multiplier to the collect all the way to the #UltimateFullMontyCollect where you would get 5X for song 1, 4x for song 2, 3X for song 3, 2X for song 4, and 1X for song 5.