Starting a thread specific to the 2022 NACS and WNACS.

I made the first post a Wiki in case anyone has pertinent info to add. 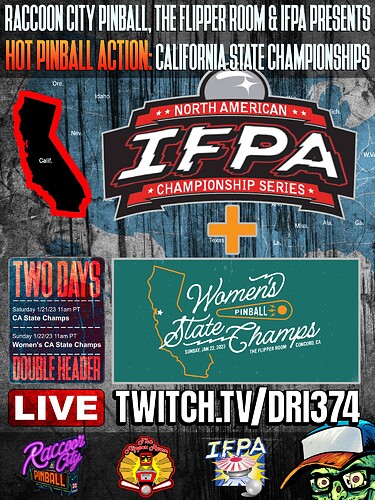 Could we add a column to the sheet for the states where competitors had to pay coin drop for each game?

I searched around Challonge and Match Play Events to find brackets that hadn’t been posted yet. I didn’t verify that these are the right brackets but I think the chances are good that they are. If you know one of these links in the spreadsheet is wrong, please clear it or update it.

Could we add a column to the sheet for the states where competitors had to pay coin drop for each game?

Unclear as to why you’re mentioning this as something unusual or negative. Can you elaborate?

Yeah, unless the location is getting a cut of the funds, I don’t know why 16 people would expect to play pinball all day for free. I hosted state finals a few years ago, took a small cut of the prize pool to provide food, broke even at best, which was totally acceptable. But I’m not a business.

didn’t IFPA have an SET $ (per player) amount that the host can change for an event fee as part of rules at least in the past? For non coin drop locations.

Unclear as to why you’re mentioning this as something unusual or negative. Can you elaborate?

I can see how someone might think I’ve done all this work and spent all this money to get this far and now I have to spend more? But dropping coins on location is the best possible way to support the hobby.

If I was in charge, only public locations on coin drop could be used for state championships. Using a public location also makes it a level playfield for everyone. No one has home field advantage and everyone can practice on the games leading up to the event.

Stream for Illinois will be at https://twitch.tv/raydaypinball

Thanks for making this editable. I hope you don’t mind that I added columns for payouts according to the NACS rules. It should be correct for super states too, but I wouldn’t mind someone checking my work.

Yeah I sound a bit whiney in that post. I am sure the public venue we are at is going to see an increase in coin drop (and cover charges) just from us being here early to play and not charging coin drop for the tournament games and warm up balls wouldn’t be a big loss in the grand scheme of things. In my mind the venue was taking their cut throughout the (two) year(s) for players to qualify for what I believe to be a pretty prestigious title of state champion.

Looking forward to competing either way and am glad I’m in a position to support location pinball in a town outside of my own.

Kentucky SCS. No stream. Us hillbillies don’t have internet yet.

Arcade legacy is sponsoring everyone’s entry to the arcade, and lunch is being taken care of for all 16 players too!

It’s a nice thought but I’m sure Delaware isn’t the only state that wouldn’t have an eligible location if that were the requirement!

NKY will have no public locations again starting next year. So when it’s our turn to host again, we will have to do it at someone’s house.

are arcade legacy and c2g closing?

Arcade legacy will be consolidating with a Cincinnati all in one arcade legacy, and C2G refuses to run tournaments.

A quick look at the pinball map shows three public locations in Delaware with at least 12 games.

Delaware finished at 3:30pm. Matthew Richardson will be representing us in Wisconsin. Congrats Matthew!! 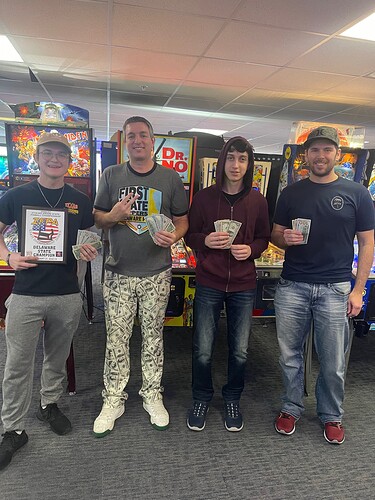 Only one of those is coin drop, and it has never hosted a tournament, the other two aren’t public.