As I head out to shovel my driveway before thinking about drive 1.5 hours to play Pinball, I think we should get a snow boost. Tournaments get a 10% boost for each foot of snow that has fallen in the last 24 hours.

We got some snow-like stuff that looked more like Dippin Dots the other day, but only .5" or so. I’d still expect some kind of compensation in this situation.

Being from Chicago I love this

Snow multiplier? Snow only bothers you on the way to play pinball. Once you get there, all is fine. Out here on the left coast, we have earthquakes, mudslides and wildfires. Which can, and often do, happen mid-game. You try riding a Orbitor 1 down a mudslide without draining!

Just yesterday I was at the sportsplex playing Earthshaker with Eddie Money’s Shakin’ on the PA when we had a 6.2 quake. Lasted about 45 minutes. Never drained. No, if there are any multipliers, there should be a 10X multiplier for any tourney where an earthquake, mudslide or wildfire occurred. It a no-brainer, really.

Hey, that’s a good question for Josh & Mark: if there’s an earthquake [say at CalEx, for example] during someone’s play which causes a ball drain, what’s the ruling? I assume that a quake that causes a machine malfunction just takes the malfunction rule, but what about the player getting tossed sideways, or the ball doing likewise, or the game tilting due to the quake?

And while we’re on the subject, what’s the rule when you’re told to evacuate during a game due to a fire alarm or something else like that?

And while we’re on the subject, what’s the rule when you’re told to evacuate during a game due to a fire alarm or something else like that?

Speaking from experience in Feb of 1995 during doubles finals at PAPA, you GTFO eventually (preferably at a ball break) once you’ve determined there actually is a fire, then you hear the whole story about it over 20 years later (thanks Alysa).

The game was still running when we got back. Don’t remember which one it was, probably Frankenstein. I think Gottliebs had a propensity to time the game out due to inactivity, so dodged a bullet there.

I think the ruling should be the same as how the NHL handles it. I was at a SJ Sharks game a few years ago when an earthquake happened during play. Not a big one, but everyone there felt it including the players (a few were looking around). None of the players fell down and the refs didn’t blow a whistle, so game on. At the first break in the action, they played Eddie Money’s Shakin’ on the PA. Probably wasn’t the first time it happened.

I stayed standing up less than 10 miles away from the 6.2 Morgan Hill earthquake. And I didn’t have a pin to hold on to. If an earthquake big enough to knock players down happens, nobody is going to care about a ruling. People are going to get hurt and/ or die. Worst case, event gets canceled or postponed, like the 1989 World Series.

Were you at IFPA11 in Denver when the roof was collapsing on us?

As the water level started approaching the row with Sorcerer, Addams, Funhouse, etc we literally had to tell the players to get the fuck off the machine so they wouldn’t be electrocuted.

Then I DQ’d all of them

Florida delegation seconds the motion from the floor.

My very first tournament was at Lyons Classic Pinball shortly after the 2013 flood. The town was closed off to visitors, with manned police blockades at all entrance points. But, you could print out a special voucher that said you were just coming to the pinball tournament, and they would let you in.

Certainly my 0.08 points should have some sort of multiplier.

I demand a picture of that voucher!

That’s awesome. If not a multiplier, maybe IFPA should consider some type of Purple Heart award for players going above and beyond the call of duty. If you keep playing in the face of injury or death, you get a Purple Heart (and a beer).

I got you all beat!

I drove through this: The February 5–6, 2010 North American blizzard, commonly referred to as Snowmageddon, was a paralyzing and crippling blizzard that had major and widespread impact in the Northeastern United States. The storm's center tracked from Baja California Sur on February 2nd, 2010 to the East coast on February 6, 2010, before heading east out into the Atlantic. Effects were felt to the north and west of this track in northern Mexico, California, and the Southwestern, Midwestern, Southeastern, and most n Mo...

To get to Cupids and Canines at the PAPA facility from Toronto to Carnige, it shut down most of the state but I still made it! @sk8ball, and @bkerins made it there as well

I guess I’ve been telling the story wrong…it was actually my second tournament. I actually found the original in my trunk recently (and I think recycled it), but lo and behold, it was still a pdf attachment in my email. Drumroll please… 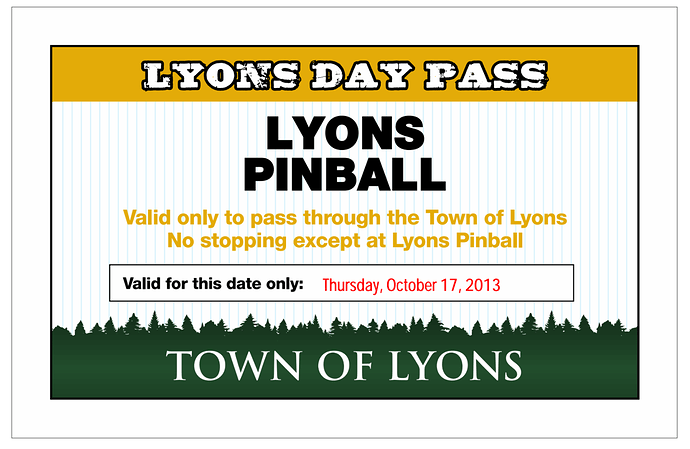 Well if we are talking about overcoming adversity; My favourite story is still @PinballProfile getting stabbed in the arm with a sword during league final and still going on to win the tournament.

As for earthquakes, would the pinburgh stage qualify?

C’mon, you can’t reference this sort of thing without more details.

C’mon, you can’t reference this sort of thing without more details.

I was not there, but as I understand it. Closing the door to the bathroom, the door was stuck a little. @PinballProfile pushed the door closed, and that caused one of the decorative sword on the wall to fall tip down into his arm. Started bleeding, so he grabbed some paper towel and ducktape to dress it. Went on to win the tournament.

When he got home, took the dressing off and it was still bleeding. Needed to head to the hospital for stitches.