Zen Studios, Pinball Factory and the IFPA Team up for the IFPA – Pinball FX2 CE Open 2017

Become a part of pinball history at the IFPA – Pinball FX2 CE Open 2017 in Dallas, TX!

San Francisco, CA – January 9, 2017 – Zen Studios, Pinball Factory and the International Flipper Pinball Association are proud to announce that they are teaming up for an exciting new tournament to celebrate the launch of Pinball FX2 Championship Edition, Zen’s arcade cabinet version of its hit digital pinball experience, Pinball FX2. Taking place from March 16 to March 18 at Fun Billiards in Dallas, Texas, the IFPA – Pinball FX2 CE Open 2017 invites players from all over the world to test their pinball mettle for a chance to win their very own Pinball FX2 Championship Edition home cabinet!

At the IFPA – Pinball FX2 CE Open 2017, players are invited to face off on Zen Studios’ original Wild West Rampage table, achieving the highest three minute score that they can. The entry fee is $30.00 for those who preregister by March 1, a savings of $20!

Here is a breakdown of the event and prize packages:

“Pinball is a competitive game, so establishing the premiere event series for video game pinball competition is a huge step for us,” Mel Kirk, VP of Publishing at Zen Studios said. “The IFPA has been working hard to build competitive pinball tournaments, and it feels amazing to join their efforts to establish an eSport component that will drive the experience forward in new and exciting ways. Zen Studios has a long and storied pinball history, so this new chapter with the Pinball Factory and IFPA has everyone excited!”

“The IFPA is pumped to have Zen Studios and the Pinball Factory joining our effort to expand tournament pinball,” Josh Sharpe, IFPA President said. “We can’t wait to pioneer new avenues for people to enjoy the game of pinball and bring together generations of players in awesome new ways!”

First revealed in November 2016 at the IAAPA, Pinball FX2 Championship Edition is the official virtual pinball cabinet and video pinball game of the IFPA. The arcade game combines all of the amazing pinball action from the hit digital title with a state of the art arcade cabinet layout for a truly unrivaled experience. These cabinets will be everywhere you can find pinball games, so come and be one of the very first players to experience the next generation of arcade pinball and be a part of pinball history!

Zen Studios is a leading global producer and publisher of interactive entertainment software for all major digital game platforms, and is recognized as one of the premiere independent gaming studios in the world. Zen is an internationally renowned publisher headquartered in Budapest, Hungary with offices in the United States.

Zen Studios has worked with some of the largest brands in the world of entertainment, including Marvel Entertainment, South Park, and LucasArts, as well as revered gaming properties like Valve’s Portal and TellTale Games’ The Walking Dead. Zen Studios’ CastleStorm franchise has also won the developer critical acclaim and commercial success, including the coveted Editor’s Choice awards from both the Apple App Store and Google Play.

The objective of the International Flipper Pinball Association (IFPA) is to elevate the awareness and visibility of pinball across the globe and generate media coverage and corporate backing to bring the sport of competitive pinball back into the spotlight. The IFPA has created the World Pinball Player Rankings (WPPR) to establish the first official rankings system of pinball players throughout the world. For more information, please visit: http://www.ifpapinball.com. 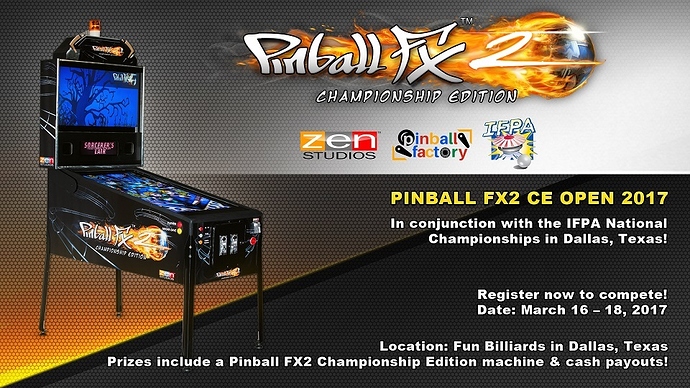 Unlimited qualifying opportunities . . . top 4 advance to head-to-head playoff on Saturday night, streamed LIVE ON TWITCH (with Pin-Masters going on in the background I’m sure)

Unlimited qualifying opportunities . . . top 4 advance to head-to-head playoff on Saturday night, streamed LIVE ON TWITCH (with Pin-Masters going on in the background I’m sure)

Pingolf with a side of “virtual in a real cabinet” unlimited best game? what’s not to love!

Congrats to Julie Gray, who will be walking out with the top prize at the moment ($5500 value)

I wouldn’t be able to travel out to Dallas, but this sounds really cool. Congratulations to the people at Zen Pinball for being able to make a competition like this at last! I appreciate what they’ve been doing making pinball more known to the general public.

If I could go out to TPF and compete, I could dominate. However, sadly, it’s too far away from where I live.

I wish everyone to perform his or her best in this tournament!

@pinwizj, tried to register, but the paypal button send me to paypal main page and now a check out page?

Paypal me at "pinwizJ@aol.com" . . . I’ll magically take care of the rest.

done… though my fingers instinctively did not want to write those 3 letters in a row… a, o, l… who knew these were still around