Womens Rankings - It's Now A Race!

The Womens Rankings don’t get a lot of attention, but I thought it was time to point something out. As far as I can tell, Helena Walter, currently ranked 86th, has been the top-ranked woman pinball player since some time in 2004. With their performances at the Vancouver Flip-Out, both Robin Lassonde at #96 and Louise Wagensonner at #105 are now within striking distance of claiming the top spot. Helena’s record over the years speaks for itself (played in 4 IFPAs, won PAPA B, 1st in Swedish Championship Classics, etc.). Both Robin and Louise have made great strides recently; in fact, Robin is #1 in the California SCS as of today. We now have exiting races not just for the Worlds Greatest Pinball Player [Keith, Jorian, Daniele and Zach] but also for the #1 woman player.

Let’s congratulate each of them and wish Helena, Robin, Louise and all the other women the best of luck! Bravo!

Yep, only 15pts difference it seems!

I’m happy that both Robin and Louise are getting to a point in the official rankings that I feel more accurately reflect their skill. In the Bay Area we’ve known for a long time that they both belong in the top 100.

Helena should be in action this weekend at the Boras Circuit (!) event; she got quite a load of WPPRs last year with a 2nd and two 3rds, so we’ll see what the gap is once they post their results. Anybody know what Robin and Louise are likely to play in next?

I know, it’s exciting to see these talented ladies moving up the ranks!

Woohoo! So glad to hear that we have another woman in top 100 now.

Funny how it looks like Helena is reacting to getting bumped to #2. 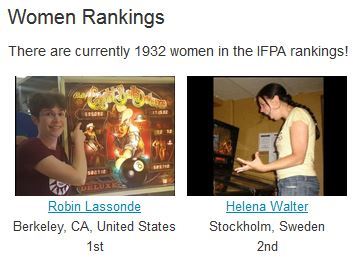 I got to meet and play with Robin a few weeks ago. She’s an awesome lady and a badass player. Looks like her new profile pic was our last game, for all the marbles. Before we started, I mentioned that EBD was the easiest game there. Then I got pretty much two straight house balls, naturally. Then I said that I probably shouldn’t have said it was the easiest game there. Robin was like duh. She was player 1 and had a good first ball followed by two more decent balls. I stepped up to my last ball and had a fairly good ball, got 5x multiplier lit, then drained. We waited and watched (seemingly forever) until the bonus counted down and we ended up with what you see. Robin won with 595k, I got second with 589k and Allison O finished third with 582k. 13k points difference between us. That was fun. Look forward to seeing Robin (and Allison) out there again soon.

Guessing with Helena having moved to USA they will compete more against each other making the race more direct so to speak. We will miss her here in Stockholm for sure