When do TGP multipliers apply in Match Play format?

You’ll get 2x TGP credit for all rounds where more than half the groups are 4 player groups.

I don’t believe that’s the case — needing to have 50% groups be 4-player. You must simply use 4-player groups wherever possible. I believe you have fewer 4’s than 3’s when you have 13 and 17 players. You still get 2x TGP per round.

Unfortunately we just found out recently this isn’t the case. I always thought as long as it was setup to attempt 4 player groups, you were good. I could be misunderstanding though.

After the recalculation of the strikes simulator by Keefer we’re now capturing these Match Play formats more accurately now.

Erik is correct that Adam will now only give those 1.5X/2X bonuses in the rounds where a majority of groups were made up of 3/4-player groups respectively.

So I have to turn away a 17th entrant? “Sorry, Josh says I need four player groups…”

Or you can take the 17th entrant and let the TGP fall where it may?

Also seems strange you need 51% which is inconsistent with other ifpa rules that use percentages:)

I was surprised by the more than 50% too.

I disagree. All other things being equal (because we can’t control what games get assigned, and control whether longer-playing players get put into 3- or 4-player groups… the duration of rounds is governed by the longest-playing group. Which is a 4-player group. If you’ve got a 4-player group, it should play longer, and your 3-player groups will end up waiting. It’s not as significant on how many 4-player groups you have.

After the recalculation of the strikes simulator

The format under discussion here is a non-elimination Group Match Play format. Not a strikes format.

For this tournament to have maximum potential, I should strive to pre-register in multiples of 4. (In other words, open it up to 16 players, then increase to 20, then to 24, etc.).

If I’m looking at the breakdown of numbers correctly, here are the 3/4 player group breakdowns given the number of players, and whether 4-player is the majority or not. 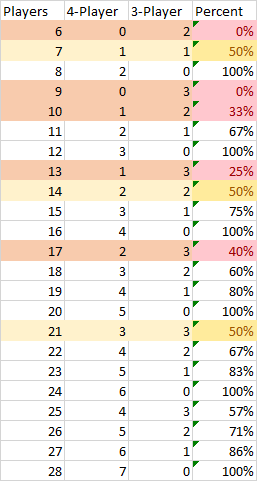 The reason I’m specifically interested in this clarification is that for league night we’ll get anywhere from 10-20 players, and depending on what number we hit that will determine the TGP of any given league night.

You can disagree, but we have always taken the most restrictive path in regards to anything to do with TGP.

So in the case of exactly the same number of 3 player and 4 players groups we are going to take the most restrictive path, that being 1.5x over 2x.

This seems strange but it makes sense. 21 players is 50% 3 player groups so you only get the 1.5x multiple but rounds will go faster with 21 players than it would with 20 players. So more people doesn’t always mean more time. The new (2019) TGP rules def. make more sense than the old ones. 100% TGP is generally going to require a minimum of 6-8hrs of play regardless of format. The old rules you get 100% in 3-4 hours with some formats but others required 8+ to get 100%. And yeah it will never be perfect but this is pretty darn close. I bet there were far fewer 3 strike tourneys in 2019 vs 2018. I bet 2019 had more variety as well due to the rule change, which I think is great.

What are the exact changes in 2019?
Where in the ifpa TGP guide does it specify this new 51% rule for match play rounds being 4 players to count as 4 player groups? Has this ever been enforced? How is it enforced?

The charts for strikes tournaments are still accurate for TGP right? For example if the chart says * 15-21 players –> 9 games towards TGP then, ANY NUMBER between 15 and 21 will get you 9 games, right??? 17 doesn’t magically get you 8 games?

The charts for strikes tournaments are still accurate for TGP right? For example if the chart says * 15-21 players –> 9 games towards TGP then, ANY NUMBER between 15 and 21 will get you 9 games, right??? 17 doesn’t magically get you 8 games?

In the simulations that @keefer ran you could literally see this drop at random player counts.

In an attempt to minimize the tiers of TGP, I grouped things together as best I could to capture the most likely result.

I don’t understand, is that a yes or a no to my question? Can I rely on this guide or not

Everything in here is static:

and if you run a format that matches what is in the guide you will get the exact TGP listed.

Okay so I don’t need to worry about weird number of players for strikes tournaments just for match play, and that’s only because of the “majority of games” clause