Un-bastardizing games to be more fair

I had a thought today, after another tournament with yet another Harlem Globetrotters that was very prone to punish you with a SDTM drain after hitting a drop target. We sometimes take steps to alter machines to make them harder, reduce game times, etc. Should we also take steps to reduce unfair situations? I can handle losing my ball to just about anything, but it really rankles me to successfully make a shot, especially one that you really want to do to score well, and get punished for it.

Before anyone says “use the upper left flipper instead,” yes, I know about that one. I still think it’s unfair to do the right thing and still die from it.

I feel it’s too easy to just conclude “that’s pinball” or “it’s the same for everyone,” etc. That’s a cop-out. Shouldn’t we be making the games hard, but fair?

Then they’re are those people that bastardize games like IM…really?

Shouldn’t we be making the games hard, but fair?

Games can definitely get out of whack and if they are punishing after certain made shots, it may have not been their intention.

I’d suggest letting them know and if it’s not their intention, maybe they are willing to address it inbetween rounds of the tournament.

I did this at Pincinnati this year with a crazy tight tilt on Big Game and a goofy saucer kickout on Argosy.

Then they’re are those people that bastardize games like IM…really?

This is one I don’t get either. Whenever I walk up to one with the outlane wide open, no rubbers, I’m like, “well I guess I’m going to have zero fun today.”

If the game doesn’t play long, don’t do much to it. Maybe tighten the tilt a bit. Leave the rest.

At PAPA a few years back they totally bastardized T2 in C qualifying. A Hit the Skull lock target = Instant drain. If you tried to save the ball or make it rattle in the lock target area you got a tilt due to it being ultra sensitive. Didn’t matter if you hit target from the left or right flipper you were getting a SDTM from a successful shot.

I have seen examples of TD’s trying to improve inherent nasty feeds. One that comes to mind is the fatter post rubber on the exit from the pops on TWD. I’ll say this. If I ever use The Beatles in a tourney it’s getting rubbers put on the outlane posts!

Bah! Beatles is an easy pin with posts out in the inlanes. All about the loops/spinners and getting modes played. Going after the targets with no posts/rubbers is asking for a well deserved drain.

If I ever use The Beatles in a tourney it’s getting rubbers put on the outlane posts! 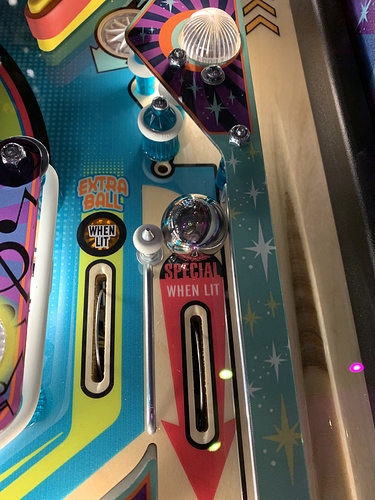 WTF? Try a smaller one next time…

But how do you get modes lit other than the one at the beginning of the ball? You must shoot FAB and FOUR targets. And yes, they are some dangerous shiznit!

Whenever I walk up to one with the outlane wide open, no rubbers, I’m like, “well I guess I’m going to have zero fun today.”

Ugh, I hate this. We’re supposed to be having fun, right?

That’s fair. I was struggling to come up with examples. I guess Harlem is in a special class that way, More often than not I’m risking draining if I go for those drops.

Maybe also a setup issue, but the Tyrell standups on GoT seem to be in a unique orientation where hitting them from a trap sends the ball screaming to the left outlane.

Maybe the problem is just bad physics on some games, like how later versions of KISS give a small ball saver coming out of the head, to compensate you getting screwed by that.

For sure, the hardest part of competition pinball is play disciplined, executing the correct shot, and being punished by a drain. Then of course a player who doesn’t play strategically whacks the flippers defensively and somehow lucks into a huge score.

Specifically for Iron Man; in a high score qualifying scenario I think it should be outlane rubbers/posts removed; but for match play I think leaving them in leads to more exciting competitive scenarios. If you leave them in during high score type qualifiers you end up with people chasing ridiculous scores and way too long playing time.

Leaning games should be a non-issue. If a game leans, it should either be addressed or not be used in competition period.

I wish I lived wherever you all did. Leaning games is a problem in literally every single tournament in my area.

Yeah I guess I’m spoiled. The few TDs we have here are good about checking, cleaning, leveling, and fixing games on a regular basis here.

Yeah, but what do you do when the operator tells you “the game is level, it’s the floor that’s not level”? Lol

The operator I work with also plays in all the tournaments, so he would never say something so ridiculous. Haha

Yeah, but what do you do when the operator tells you “the game is level, it’s the floor that’s not level”? Lol

Stop putting $$ into their games, and let them know the reason why.