Farsight is now looking for some pro tips for TX Sector.

Feel free to email me or post to this thread if you want to share any tips, as well as whether you want to be credited for those tips on the game or prefer to be anonymous.

Sweet! I don’t know anything beyond hitting the lit spinner, but I’m excited to see this on pinball arcade!

The only thing really worth shooting for is the lit spinner and generally, the center one will be worth more since it’s closer to the flippers but it does not start off lit, you must roll over the right inlane switch (Shatz it or get lucky) to get it lit.

Mega Level is valuable (10k for each level) if you collect it while the hurry up multiplier is still high. To collect knock down the drop in front of the left ramp, then shoot whatever shot is lit for teleport before the drop comes back up. It moves down from 9X pretty quickly and I think the most I’ve ever collected it for is around 5 or 600k. When a spinner is worth 300k, there’s not much reason to risk the more dangerous teleport shots. The standup target hidden above the pop bumpers spots two Mega Level values. Mega Level is also your bonus (again, 10k per level) and carries over unless changed in the settings.

On the one I have here (borrowed from a friend) I’ve nerfed the left spinner with a big yellow rubber. It makes that spinner and the feed back from the pops much more challenging. Otherwise, anything that rolled back down that lane went pretty much straight to the left flipper for an easy catch and a shot right back to a spinner.

TX sector has an opening from the right outlane to the shooter lane. To save a ball draining out the right, a somewhat counterintuitive nudge to the left, bouncing the ball off the inside post and back to the shooter lane is more likely to be successful—at least on the real thing it is. 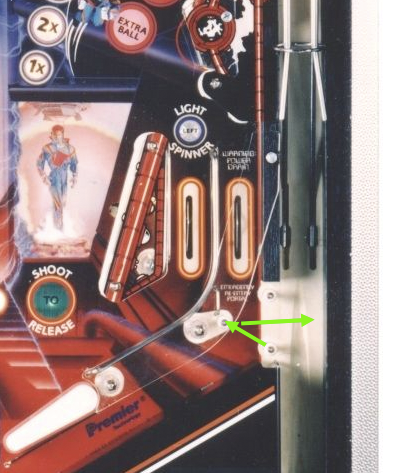 It’s a really one dimensional game but I love shooting spinners all day long and the sounds in this game are just so damn good.

If any of this is used, no need to credit.

Basically what other people said. The multiplied transport (I think it always counts down from 9x, no matter what your level is) can be really valuable, worth the risky drop target shot. There’s not much to do in multiball than what you were already doing.

Also, your game will improve if you shout TX TX TX while playing and dance like a robot.

whatever happened to your dream of having a pinburgh bank made of 4 tx sectors?

It does indeed always count from 9X, just double checked.

During Multiball, besides continuing to shoot lit spinners, you’re best off setting yourself up for your next MB by advancing energy level as close to 10 without going over. If I recall correctly, your energy level holds when you drain down to single ball play. I don’t know if this is an adjustable setting.

Crank up the sound and let someone else play it!

Sorry to drag back an old thread, but…

Playing TX Sector this morning I got the TX Sector version of a saved ball or dirty pool. During two ball multiball, I was able to save a ball into the shooter lane from a right power drain. This of course gave me a single ball multiball scoring with a saved ball at the shooter. To me this is the ultimate in fun and makes me feel like I am back in the day in an arcade and getting one over on a game which has screwed me on more occasions than I care to admit. As rarely as I pull this off, I always enjoy the moment and go with it. I was not able to hit the extra ball and ended up with 7.8 mil.

In the past I’ve heard that certain tournaments required shooting this ball back into play ASAP? Does the Farsight Pinball Arcade autoshoot this ball or can you continue to play? To me this is a design feature of the game and should be allowed.

Depends on the ruleset the tournament is using. In most situations IFPA rules will require you to put the ball back into play. Some other local rulesets allow you to keep one in the shooter lane, but that’s pretty rare.

Playing it as it lies — not being forced to plunge — is popularized by FSPA league rules. So not super rare, since lots of leagues derive from FSPA rules.

There’s good logic to this solution: many players, especially more casual ones, don’t intimately know the rules of games, can’t track the location of every ball during a multiball, etc. So in the example of a ball that popped into the shooter lane when the player thought it drained, while they’re still trying to keep another ball alive… there are a few choices. You can say that the player didn’t plunge the ball in (arbitrary time) and therefore their score is DQ’ed, leaving some really unhappy players for something that wasn’t their fault. You can have a rule “forcing” the player to plunge it, but not enforce the rule if the player doesn’t know the ball is there (or claims not to know)… resulting in wildly inconsistent enforcement of the rule. Or you can play it as it lies, which is enforced consistently and embraces the “ball is wild” philosophy of pinball. We encourage the latter choice.

Do you treat stuck balls the same way?

Fireball Classic is famous for this as well, we force plunge it is up to the players on the machine to ensure the person plunges as soon as he/she and if after warned the player does not then they get a big fat zero for that game.

This is one place where I strongly disagree with the IFPA rules. If a ball is deliberately returned to the shooter lane by the machine (not an airball or trough kick-through) when there is no ball save active and such return is a normal feature of game play, the player should be permitted to play the ball when they choose, as on Fireball and TX Sector, among others. There’s usually some degree of skill involved to get the ball there; the option to plunge immediately or not is your reward. Balls put into the plunger lane by a multiball feature like a ball saver that returns them to play should be plunged if they don’t automatically do so since the purpose of the ball saver is to keep the balls cycled into the playfield. (Ideally, there would be a separate ball reentry area and mechanism for the multiball ball saver case, but there are clear physical and cost advantages to just using the trough and plunger lane.)

Do you treat stuck balls the same way?

Even if the one stuck ball creates a one ball multiball?

I think I may be the only person that does a hybrid.

Play on until only one ball is live. Then trap up and get help freeing the other ball.

Delaware rules follow IFPA with the exception of stuck balls. We use that 1 rule from FSPA. Always play on until the only ball left is the actual stuck ball. We have run over 40 events and we have never had a player “blow up” a game because a ball was stuck and the capitalized. If they do happen to capitalize, so be it. Delaware tournaments tend to have about a 70/30 mix of players who know all the rules versus the casual players who just enjoy playing tournaments. As mentioned previously by @joe, its SO MUCH easier for everyone in the tournament to understand “play on”, than it is trying to explain to the casual players that they must always keep track of the number of balls on the playfield and to trap up when one disappears, etc.