Twist on a tournament format

So my location is located in a bar attached to a bowling alley. The owners suggested a pinball tournament that follows a format they use for a bowling tournament. A qualifying period to establish seeding, followed by finals. The twist is that starting with the #1 seed they get to choose their opponent from all other players. Then work your way down the seeds until everyone is playing.

We did 6 or 7 rounds of 4 player matchplay to establish seeding and then began what we called “The Grudge”. We made this portion single elimination head to head so basically it was very do or die. You got to pick your opponent but the machine was random and they got to choose player order. It was really interesting since we had 14 people after the first round of eliminations leaving us with only 7 people. The high seed has to pick an opponent and can’t choose the bye. We had husband call out his wife as well. Anyway lots of ways you could of course modify it to increase WPPR points or total length of tournament it for a Thursday night event we had a lot of fun and it was completed in just about 3 hours.

The single elimination one game do or die element really made for a intense but fun setting for finals. It is definitely something I will use again. Any questions feel free to reach out.

Oh also the runner up was a person who didn’t initially want to play because hey didn’t think they would be good enough to compete. They finished third in qualifying and runner up for the whole event. 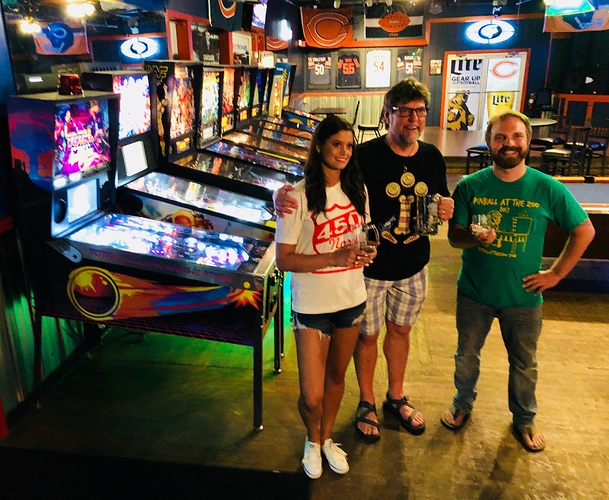 leaving us with only 7 people. The high seed has to pick an opponent and can’t choose the bye.

I really enjoyed this format except being called out by Tommy and destroyed on Indy 500! Maybe the bye could be incorporated into the highest player after qualifying on round one if needed in the future. I was talking to the owner who said this came from bowling. He said in bowling it’s usually based on an average score so he could see a Herb style limited entry qualifying. They also do best 2 out of 3 in bowling in the finals. I know that would have helped me! Seriously I loved the Grudge part. It does put more pressure on you and created a more fun finals with players calling out other players.

Loving this format. Might have to try this sometime.

The only problem I see with this format in a local tournament is that the worst players get called out by being selected first which might be a turn off to new players, but if it’s not a problem in bowling maybe it’s not a big deal.

A friend of mine suggested that the state finals should work this way. #1 seed gets to pick opponent out of #8-16 seeds, then #2 gets to pick from remaining #8-16, etc. This prevents a great player that sneaks in at #16 from getting stuck playing another great player at #1. (I suggest 8-16, rather than 9-16 since #8 gets stuck with whoever is left anyway after 1-7 pick.) Each round could work the same way.

Yeah I thought about that too but in traditional seeding they would be stuck playing the #1 seed anyway. Now they may not be.

Oh yeah, if the qualifying is immediately before the finals, then the obvious choice is for #1 to pick the worst qualifier even if #1 doesn’t know that person. Everyone already knows they were the worst qualifier, so nothing to feel bad about at that point.

I think it would be VERY interesting if states worked this way.

He said in bowling it’s usually based on an average score so he could see a Herb style limited entry qualifying.

I’d really love to see more pinball tournaments that took an approach like this instead of just best game, or maybe some kind of weighted thing

Might be interesting to use Herb with counting the total of your 2 best scores on each game or your two best single games. Tournaments could use fewer games when that’s an issue, and a player who had one big game early would still have to prove they can get at least a decent follow-up game to stay on top.