Hi all,
Has anyone been to a tournament that awards a trophy to the player with the lowest score? If so, do you have any photos of the trophy/player? Ive heard of this happening a few times and I think its hilarious and in good fun. I for one could have a shelf full of them by now.

Ive heard about one called Brownwater which was designed to resemble a Whitewater machine, could have been a PAPA or IFPA tournament, can’t remember!

We used to get a Mr. Hanky figure from Stern back in the day for our pinball league in college. The player that finished in last would get it every year.

Pittsburgh Pinball League has a “Booby Duck” award for the worst performance in finals. Dan Burfield says: “It started with Thomka using a terrible duck art thing he found in the garage and writing Boobie Duck on it and gave it to VAH since she made finals and took a goose egg.”

Tradition is that each “winner” makes (or goes to Goodwill to find something horrible) for the award for the next season. Brownwater was an instance of the booby duck. I received the lovely horse, and made the LOSER vest. 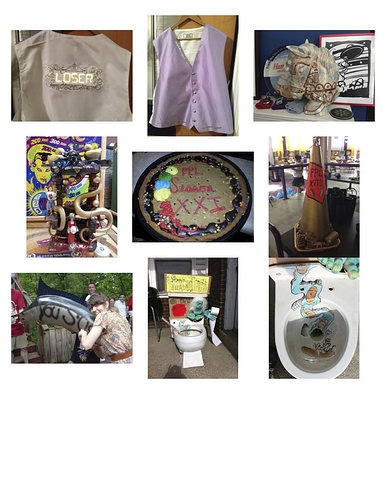 Wow this is awesome!

Our local club FLiPS uses what we call the Super Grover award for the worst result at our tourneys.

It started 5 years ago when I held a tourney at my home on the various Stern Superhero machines. The player with the worst result of that event received a coffee mug with Super Grover on it. Since that time, various trophies showing Super Grover or some symbol carrying the SG moniker have been a monthly tradition at every FLiPS event regardless of the format or machines used.

Then I started joking that 4th place is Super Grover of the finals since that person is often standing empty handed in the final 4 photos while the top 3 are standing there with the big cool trophies. Been there, done that

Interestingly, as others started experiencing the emptiness of 4th, this lead to many hosts giving trophies for the 4th place finishers at a tourney since most events boiled down to a single final 4 match, yet only 3 trophies.

And even more interesting is that some of the legitimate Super Grover prizes for dead last have been so cool, people have been known to sandbag the tourney to get the prize! Crazy!

And even more interesting is that some of the legitimate Super Grover prizes for dead last have been so cool, people have been known to sandbag the tourney to get the prize! Crazy!

This is what always worried me about last place trophies. They’re fun but sandbagging is lame. A buddy of mine that ran a golf tournament used to give out a prize for second to last. It was always a lot of fun for the guy that managed to climb out of the cellar by a stroke or two and it definitely kept the players that felt like they were out of the running or had no chance a reason to keep competing. I did this for a small pingolf tournament I ran at my annual xmas party last year and it was very popular.

I totally agree, sandbagging is lame! I hope I have an opportunity to compete in a league that offers a last place trophy, Im sure I wouldn’t have to try to loose. In all seriousness, you should play your best game whenever you play, but as we all know some days its in the cards and some days its’ not. I love the idea of giving a last place trophy to someone who really tried and miserably failed, especially when the trophy is not mean spirited but has a sense of humor as everyone so far has mentioned.

A Stern Superhero tournament sounds like a blast! A Super Grover prize is an awesome idea. $th place deserves a prize I think!

In PPL, lowest score in first round of finals (from all divisions), so we often have tiebreakers for the Booby Duck. Winner decides if they take it or give it to the loser, so I’ve seen some pretty fierce competition when someone wants the Duck.

A word of caution…

I recall reading about a tourney in Oklahoma or Missouri that had a last place booby prize trophy saying something like “you sucked,” and a tourney regular brought his 9-yr old son to his first tourney ever. His son “won” the prize. Quite the unintended backfire on the part of the organizers.

Exactly. That is why I feel Super Grover from Sesame Street works as a prize. It is a bit childish, not offensive and is understood what it represents. Good natured fun showing that someone came in last. (Somebody has to…)

There have been guests that have won the “prize” and still have it on display. I think that speaks positively about the concept.

One of the coolest versions was a DMD somebody rigged up to read Super Grover. There has been some nice handmade art depicting Super Grover as well.

ooo, yea, that is unfortunate.

Id love to see any photos you have of the trophies, sounds like your events a lot of fun. Im curating a pinball exhibition for Columbia College Chicago that will open in September of 2016. Instead of producing a typical exhibition catalog, Im creating a short run of zines. Id love to include any photos anyone would like to share, tournament pics, winning and loosing trophies. I would of course give credit to the photographers, organizers, participants, etc.

The FLIPS “Mr Pinball” sash is also an awesome trophy.

They do a great job in their league / player group of keeping the focus of pinball on fun.

It is actually “Mr Florida” like the beauty pageant sash

I have an Angela Drobka original for the Pittsburgh Summer Pinball Championship as well.

It makes more sense the way Pittsburgh Pinball League does it - you have to have played in league at least one week to make finals, and there frequently is competition for it. If I remember right, Jake chose to take the boobie duck partly to protect a first-season player who really didn’t have the history to appreciate the “honor.” (And also might not have shown up at next season’s finals to carry on the lineage.)