With the new TNA Code (V1.2.1) released on May 22, 2018 (thanks Scott!), I just wanted to post an initial time to beat for all reactors destroyed: 1,414 seconds with a final score of 24,350,399. By no means was I going for speed (there’s plenty of pressure involved in TNA as is) but it’s a start. Factory settings (extra balls on) done on location at Retro Arcade in Sharon, PA. I’m sure this time will be surpassed very soon and surpassed by a significant amount so let the speed runs begin!
Ending Video:
Video of Destruction of Reactor 9
Final Score: 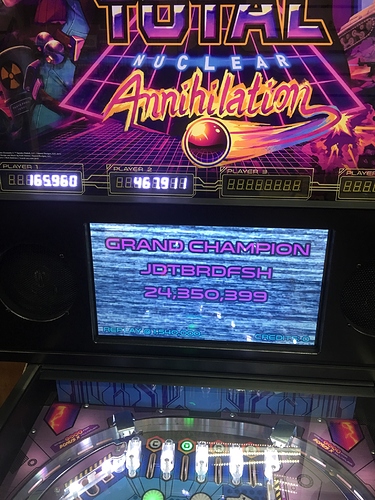 There was a tilt bob though I’ll be the first to admit it was loose.

This speed run stuff is so great. I would love to see it implemented in other games as well. Both Attack From Mars and Medieval Madness could have benefited from this.