I’ve played The Mandalorian quite a few times on location, but I don’t own it and maybe I missed the information I’m looking for. I have a question about items. When I get more than one item, how can I choose which one is currently active? It seems to oscillate between them on the left side of the screen, providing a description, but for example, if I own a Flamethrower and a Amban Rifle, from my experience, pushing the button will active the Add-A-Ball, whereas I would want to use the Flamethrower first. Otherwise I know it depends on the context, but there are contexts where more than one Item can be used. Can someone help me understand how this works?

I’ve noticed this, too, which is a shame. I figured that the press-and-hold requirement of Flamethrower would decouple it from priority logic that competes with Amban AAB and Whistling Birds mode shots.

Agreed. I like being able to choose via holding, tapping, etc.

@Dwight anyway this could be adjusted to allow the player to chose which award they want to use?

Yeah, maybe I can try this. If you hold you get flame thrower and not anything else.
The problem is right now you get that other stuff from a tap. It triggers on the close of the button. Now I will have to give it on the release. Which is not too bad if it really is just a tap. Your feature will come about 100ms later. A small but noticeable delay.

Brian and team did something similar for Stranger Things. Hold for swipe a ball. Quick tap for demo bomb.

I did it in Star Wars first!

I thought you did it Star Wars first? press-and-hold for AAB, and quick press for ShotX arrow lock/unlock

Star Wars, Thats what I said.

Here is what I did yesterday:

@Dwight, Great teaser of the next release note!

My Mandalorian is back to not registering encounter standups and the opto at the ramp diverter plays a game sound effect (not the dink) during switch test. Belsito’s Mandalorian was also doing the game sound (a different sound) at the diverter opto during test (and different weird stuff during game play) but we got it fixed with a software reinstall and his has been fine since. Is this a known issue? Is anyone else having these issues? My location players keep complaining but I can’t fix it if it’s not “broken.”

Have to say, this rulesheet rocks! Using the info here, along with several flamethrower/amban buys and some good luck, got me this GC at my favorite local spot! 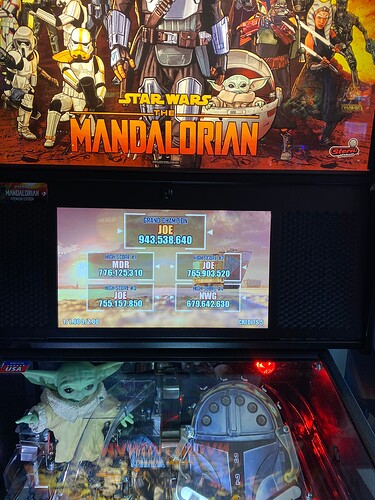 Made a SparkNotes styled ruleset for this game for anyone who needs info about the game in a hurry. I’ll link to this in the proper wiki too, I also have one for Avengers and I’m working on them for a few other games. 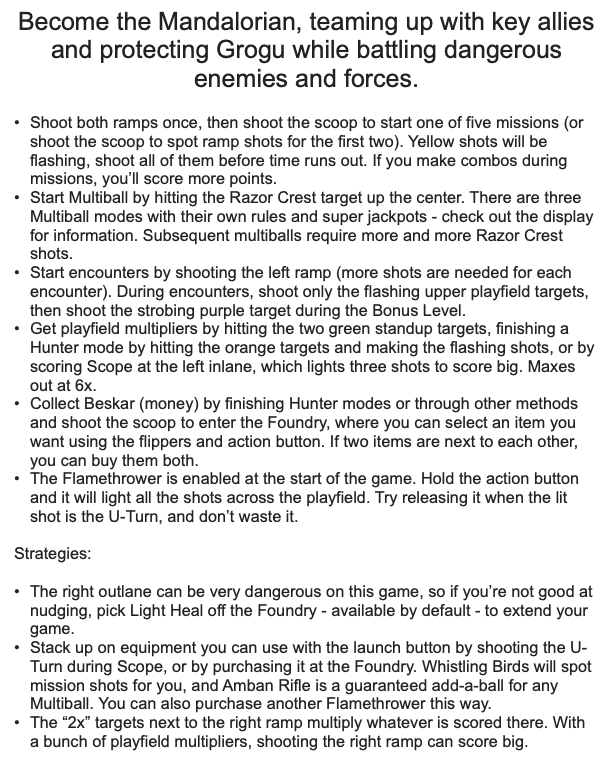 Thanks for the notes. A few amendments that might help. All 3 multipliers are maxed out at 6x. The scoop shot spotting of the ramps can only be done on the first 2 missions. Boba Fett. I’d probably make a note too that under majority of circumstances, a player will start with flamethrower already available.

An even shorter version I provided to someone that just can’t be bothered with reading rulesheets. You can figure out who

“Mando: Fire Triangle strat. Get as many — and hopefully all — of the three +1 PFx triangle inserts going, then start mode, and immediately start Multiball. At beginning of Multiball, hold down the Teolis button until all shots are lit with red. Profit.”