For anyone looking to practice some expected value calculations, there is a format from Finland that is ‘interesting’ to say the least.

Link to the bracket is here:

In my old standardized test days, I would just answer “C” and move on. I’m also all out of Advil trying to figure this out myself, so figured it was worth offering a math problem to the Bowen/Jeff Palmer’s of the world

Not touching that, but If you’ve already figured out this year’s Expo TGP, what is it?

And please, show your work.

I have last years!

The EV is almost the same for a 64 player bracket (assuming Trent cuts the field in half or close to half).

That would be 19 TGP for finals, plus his qualifying games which I think is somewhere between 7 and 9. 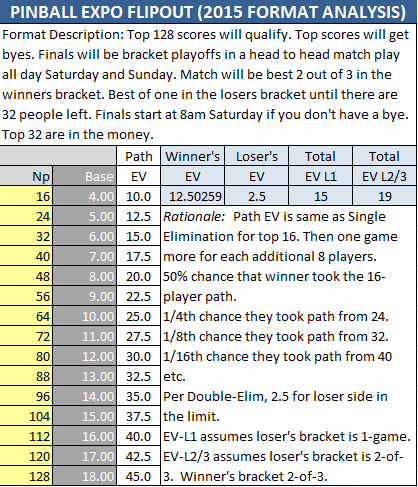 Ah, nice to see it all laid out like that!

Question about this year’s qualifying games though… If players have the option to skip qualifying completely and just be seeded into the bracket, should those games count toward TGP if some people don’t play them? Maybe that would depend on whether or not anyone actually chooses to go that route?

We’re kind of ignoring the fact that the B division winner enters the A bracket, so a person ‘not qualifying’ and then working their way through the B bracket to enter the A division will likely be more games played than the number of qualifying games played . . . so we’re calling it a ‘push’ for TGP purposes.

Sorry, I should have been more specific. I was referring more to someone who is A restricted and either chooses not to play qualifying games (unlikely) or doesn’t make it to Expo until after qualifying has ended and is randomly placed at the bottom of the A bracket.

Sorry, I should have been more specific. I was referring more to someone who is A restricted and either chooses not to play qualifying games (unlikely) or doesn’t make it to Expo until after qualifying has ended and is randomly placed at the bottom of the A bracket.

For the tournament directors out there: Why do you make these complicated formats? I’m genuinely curious.

As a player my eyes glaze over after two sentence and I stop paying attention. I know others are the same way because we all have to ask the TD the same questions (“I won my game, what happens now?”)

Because variety is the spice of life. Embrace the weird, Andreas!

You mean the 16DE4BB8BWB5L3PB3F7W+1 is not a standard format where you play?

It was hard enough when you had to explain the rules of baseball to me for your pin-baseball tournament last year!

I got 21.52 overall TGP. The format for the finals results in the winner coming from that side about 66% of the time. The winner’s side was pretty easy to calculate and is just over 20 TGP. The loser’s side is a bit messier but comes to just under 24 TGP. Taking them together results in 21.52 TGP. The spreadsheet I used for calculations is here: https://docs.google.com/spreadsheets/d/1B1i9Fn2loc1H2sJKV5rBHzHkc578UpN07Uy1PT8ISP4/edit?usp=sharing

I used 4.125 as the expected number of games played for a best of 5. I think 4 was used in other TGP calculations. If you use 4 instead, it rounds down to 21 TGP for the tournament.