I searched but couldn’t really find anything so throwing this out there. Has anyone ran a team format tournament? This would NOT be IFPA sanctioned. Moreso it would be used for a state vs state scenario where we would have about 6-8 players from the surrounding states battle it out, but not all at once.

My thoughts are having one state vs another state and once a winner is determined, another nearby state could then reach out for the challenge. If anyone has done something similar please share. Thanks!

Also, I saw some threads about team formats for league, but this wouldn’t be a league or anything. Maybe a challenge tournament that would happen every couple of months.

You DE nerds are going down!

I’m participating in something that will be very short but I’ll throw in the format anyway.

Captains from 3 teams pick their team of 8 players and bring them to the event. Their seeds within the team are based on IFPA rank.

Groups are groups of 3 made of the same seeds across the 3 teams.

Have the three player groups play a round of 4 games. Team with the most points wins.

The Epstein Cup might be helpful to read about for your purposes.

Foundation of the Epstein Cup rules came from the old PinBrawl events I used to run 11 lifetimes ago:

Reading the rules on how we handled malfunctions for that event is a riot:

“If a player is recognized to be playing an extra ball, is clearly told so, and does not stop playing the ball within 10 seconds, they receive a 0 for the entire game instead of only losing the next ball.”

“If in Multi-Ball you manage to get a ball stuck; and knowingly continue to “play” the remaining ball(s) for more than 30 seconds without notifying the judges that you want the ball unstuck; then it will be assumed that you wanted to play that way as it was to your advantage. It will then be up to you to shake the ball loose on your own and risk tilting the machine. If you cannot unstick the ball on your own; the game shall be replayed from scratch.”

Buffalo and Toronto do something similar to what it sounds like you’re looking to do.

They start with a singles round where the 8 players from each team play a head-to-head game worth one point.
Then they move on to a doubles round where it’s two-on-two and each win earns 2 points.
Then it’s a split flipper round where again a win nets 2 points.
The final round is a relay race where each side names 4 players who each get a set amount of time on the game. At the end of their time, the next person jumps in. Kind of like stall ball, but without the benefit of necessarily having the ball held! There are two games this round, if necessary, with each being worth 4 points.

You can watch the latest battle play out here:

Ottawa and Montreal also battle for the Hoser Cup, but it’s much less structured. We just often have a large contigent of visitors at each others events, so when there’s sufficient numbers, we’ll name teams and whichever side finishes with the most points takes possession of the trophy. (If there are 24 participants in the tournament, 1st place is worth 24 points, 2nd worth 23, etc.)

We also award a Spirited Pinball Reactions: A Game Unites Everyone trophy to an individual to foster good sportsmanship. 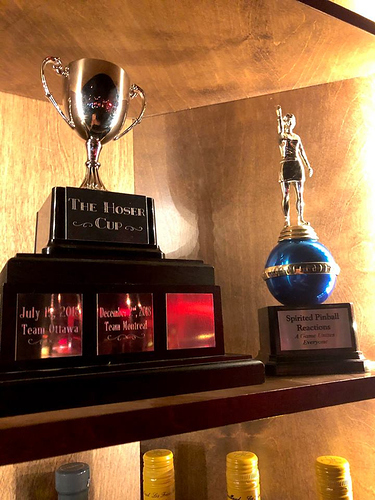 “If in Multi-Ball you manage to get a ball stuck; and knowingly continue to “play” the remaining ball(s) for more than 30 seconds without notifying the judges that you want the ball unstuck; then it will be assumed that you wanted to play that way as it was to your advantage. It will then be up to you to shake the ball loose on your own and risk tilting the machine. If you cannot unstick the ball on your own; the game shall be replayed from scratch.”

This was the version of this rule that I was first introduced to, and still my preferred (albeit flawed) way to handle multiball stuck balls. Except you never got to replay from scratch… if you chose to play on, you freed the stuck ball yourself one way or another, tilting if necessary.

Edmonton and Calgary do the same with the Alberta Challenge Cup. That reminds me I have to update the site lol.

Alberta Challenge Cup – “Battle of Alberta” is an annual ‘friendly’ pinball competition between the top players from the Calgary and Edmonton surrounding areas. The co…

Foundation of the Epstein Cup rules came from the old PinBrawl events I used to run 11 lifetimes ago:

Responding just in happy remembrance of how fun those old Pinbrawls were.

Here’s the rules for our Buffalo Pinball Team League. This continues to be the most popular event/league/tournament/competitive thing we do each year: https://buffalopinball.com/league/team-league-rules/

Seattle’s Monday Night Pinball does the following (teams of 10)

Then, there are bonus points up to 9 per team awarded for having every player play at least 3 games, to encourage always having a full roster (finding subs if necessary) and not benching lesser players.

OVERVIEW Monday Night Pinball is a co-ed team league where each team has a host bar, which serves as the team's "home." Once a week for the duration of the season, each team will compete against another team in their league, either at "home" or as...

@All - thanks for all the feedback. Be on the look out for the Mid-Atlantic Melee coming soon!

PS - Are any of these events actually IFPA registered or all in good fun?

This 1992 IFPA championship write-up shows that there was a singles and a team format for every tournament except the youth: http://www.ifpapinball.com/wp/wp-content/uploads/2013/07/ifpa2.pdf

I’m curious why that stopped being a thing at big events. MNP here in Seattle is what really got me into pinball and I still believe it’s the most fun way to compete.

Are any of these events actually IFPA registered or all in good fun?

PinBrawl used to be registered.

We do a team league here based off the NYC team league. Four people per team play each round, and rounds alternate doubles, singles, with a split flipper tie breaker if needed at the end.

I tried doing things like split flipper, or ‘one person per ball’, etc for some rounds but players complained, they all prefer regular doubles

As a side note, the bonus point rule seems to encourage participation, as in the first two weeks of the season that just started, we only had two players out the first week, and zero players out the second week. And that’s with 26 teams of 260 players each week.

Minor correction on the Doubles scoring though… Each player earns a point (up to two) for the player’s scores they beat. The combined score point is a single point that gets awarded after that. So a team that blew things up will get 2 points from one player, 2 points from their other player, and the 1 combined point for beating the combined score of the other team. A team with one strong score and one weak score may still get the combined point, and the last player to take a turn has incentive to get points to earn that combined score, even if they think they have little hope of beating both their opponents.

Both the singles and doubles scoring rules were designed to give players something extra to shoot for, and make it less likely for a game to be determined before it was actually over.