Is it just me or does anyone else have trouble with understanding how many tilt warnings you get on newer sterns (LCD era). I feel like on the dmd era I could always hear if I got 1 or 2 warnings. But with some of the newer sterns (star wars is a perfect example) I feel like I make a move and get a warning but I have no idea if it was 1 warning, 2 warnings, or 4 warnings (yes I know it doesn’t give that many but it sure sounds like it does)

The SW tilt bugs the hell out of me too. Having a long “two-part” tilt warning sound is the primary factor for me. On the other end of the spectrum, I think TWD does it perfectly with a short harsh one-part audio cue.

Yeah it would be nice for it to be consistent at least from an audible cue standpoint.

On SW, the DANGER text is solid on your first warning and will be blinking on your second warning. But it’s hard to look up, SW is definitely a problem case!

It’s such a simple fix, too… at least visually. Actually display two words of DANGER at the same time, on your second danger. We asked this of @sk8ball for maiden during early code, and it got implemented. @timballs: any chance the code for other LCD Sterns already released could get that minor tweak to them as well?

I don’t know what it is offhand, but I can swear there’s a difference in the sound on SW… Definitely not clear though. The repeating warning sound is not a good idea

Double sound on SW is annoying as heck. No idea why is isn’t implemented as one “moo!” Per warning. If I get two warnings back to back, the four combined sounds take so long that I’ve either tilted or not by that point.

And two words for two warnings should be industry standard (three for three, etc., up to however many the code supports). Let’s get the easy stuff right.

We were just talking about this at a tournament today too. DP doesn’t differentiate either and all of the games should do the visual DANGER DANGER for the 2nd I would say since often you can’t really hear games on location that well…

Not Stern, but: on Oktoberfest I went with “Warning!” for any non-final warning and “Final Warning!” for, errr, the final warning (i.e. next tilt bob activation will tilt out). I thought this language would be more clear to any player (not that players are typically looking at the screen in that situation anyway). I also turn the flipper return lane GI to red when no warnings remain, so the player has a steady and blatant reminder that they’re in the Danger Zone.

I also turn the flipper return lane GI to red when no warnings remain,

Nice. We went with a change in visual, along with different voiceovers for the warnings on Alice Cooper.

Not-last-warning quotes, randomly one of: “Hey stupid!” “Knock it off!” “Danger!” “You’re playing with fire.”

Last warning quotes, randomly one of: “Last warning!” “Do that again and you die!” “You’re going to the guillotine, not me, buddy.”

This is a frame from the animation, which includes a lovely blood splatter. 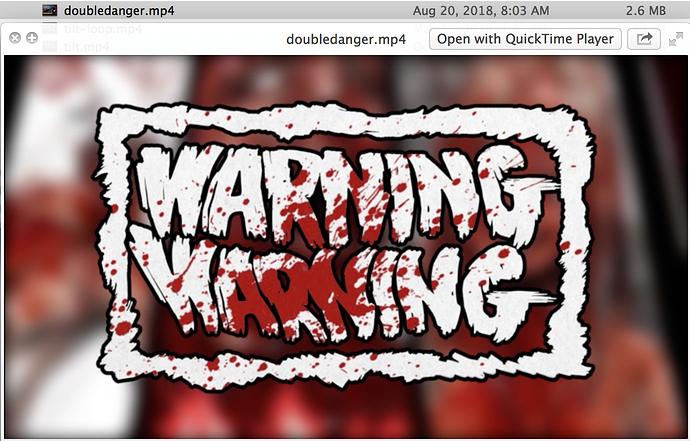 From what I’ve noticed with tilt warnings, the best warnings with a single audio cue come from games where the sound has any early sharp noise:

Walking Dead’s BOO-WEEP as per @jrb is the perfect example, but to a lesser extent:

From what I’ve noticed with tilt warnings, the best warnings with a single audio cue come from games where the sound has any early sharp noise:

Are you saying System3 FTW?

For audio cues I think every warning should be accompanied by at least a consistent beep or buzzer or something. Then the player is just counting those sounds regardless of call outs. Call outs alone aren’t enough, and to fit thematically should probably vary.