I might be doing a video on this at some point. But more than anything I am just curious to hear others strategies on this game. Just trying to make sure I’m not missing some strats I’ve never considered.

I’ll go first. I basically have two strategies. R2-D2, start death star modes. Then I light endor and stack death star I and endor III. If I hit death star first I will pass. HOWEVER if I fail to start this stack on ball one I will usually just go with Death Star I to make sure I can get to at least one planet MB. I generally use this strategy if I know I’m going to need 1b+ points.

The second strategy is Han, light tatooine. I focus on getting hoth lit but if I can hit tatooine I will start tat II alone. This way when I come out of tatooine MB I will have multipliers up and can maybe start a 20x+ hoth I (video mode) Because it’s fairly easy to start two MBs as Han I use this strat when I feel like a score of 400-500m will win.

Other general things I try to do… if I am close to a MB and start tie fighter assault I stop before I hit 35 so I can use it as a ball save in MB. Same with hyperspace MB. I try to avoid escape from boba fett as I rarely come away with a ton of points. But lightsaber at 40x can be huge. lightsaber at anything lower than 20x should probably be timed out in a tourney unless you are close to Jedi MB.

If I was going for 10b+ type scores I might mess around with Leia. Supposedly her planet MBs have higher values. But I’ve never really noticed a huge difference. I think R2-D2’s multiplier powers are probably the strongest power.

Is there any reason to ever pick Luke? I haven’t been able to find one. I feel like I got to lightsaber with Luke and the points were not much different.

I’ve also tried mainly going for hyperspace awards/MB. I still started modes but it was secondary to my main goal. I think this is too risky and I still don’t totally understand how the inlanes light the yellow hyperspace shots. But it is pretty fun trying for 1b+ hyperspace shots.

So for the Han strat I think you can choose Light Tatooine as one of the skill shots, hit the left ramp 4 times in a row, and choose only the Tatooine mode (even though you started the mode on the left ramp)? Looking for confirmation on what I just said, because I always start both - green and Tatooine together and try to go for 3 different multiballs by the end of ball 3. Mainly because I find that hitting the scoop is hard and the kickout can be dangerous, so I don’t want to shoot for it.

This is true. You can play any planet mode that is lit from any other planet’s shot as long as you have qualified that planet. So when you hit Endor four times you qualified the Endor modes. But since you chose to have the Tatooine modes lit via skill shot, you have the option to play those when you hit the Endor ramp.

If it’s early enough in the game with R2, I’m lighting Endor + DS MB and playing Endor MB first and foregoing the use of my Endor add-a-ball. Then, go directly for DS MB with 2 add-a-balls. Great strategy to surprise people with!

I always forget about stacking add a balls. Need to resist the urge early on and save for better MBs later in the ball.

I know it depends on the other stuff available but at what point do you start choosing 5% score over other items on skill shot? For me I wait until around 3b.

Yesterday I played a game and kept choosing hold bonus. I feel like maybe if you choose hold bonus after ball one it will keep giving you the option, at least it did in that one game. No idea how lucrative it was for me since I tilted my ball 3. ha. But that is yet another strategy I need to explore.

In what situation does choosing bonus X make sense?

Also does anyone ever purposely shoot at 3-bank just to build multipliers? I’ll sometimes shoot at it in ball save and when my multipliers are about to expire. The only other time I consider it is if I start a HUGE hyperspace hurry up like over 50M and I am at 2x. Ugh. I feel like I can usually hit the multipliers a few times then collect I do better than if I just took the 40-50M 2x score. a 4x at 30M would be better than a 2x at 50M. But that seems risky and probably is a bad idea.

I also do not intentionally drain balls for the auto launch to hit the 3-bank to build multipliers. I think I have better luck shooting directly at them and if I drain that’s ok. But I am often hit them 2x with the same ball where it would have taken longer to drain and get auto plunged.

I know it depends on the other stuff available but at what point do you start choosing 5% score over other items on skill shot?

What causes the game to offer this? I feel like when this or hold bonus shows up, take it.

I’ve had hold bonus get me 300 million plus on a plunge off situation.

Also does anyone ever purposely shoot at 3-bank just to build multipliers?

Absolutely. If my multipliers aren’t maxed, my whole ball save is spent doing this. Same for ghostbusters and bonus X.

I also do not intentionally drain balls for the auto launch to hit the 3-bank to build multipliers. I think I have better luck shooting directly at them and if I drain that’s ok. But I am often hit them 2x with the same ball where it would have taken longer to drain and get auto plunged.

I think it’s more important to beat the auto plunge and get them quicker. Also if you can shoot them, shoot them, but otherwise you’re just keeping too many balls in play that get in the way of the ones hitting the targets.

I’ve had hold bonus get me 300 million plus on a plunge off situation.

Hold bonus can be very huge, One example. After playing all 3 multiballs during a single ball. 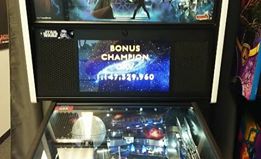 Yesterday I played a game and kept choosing hold bonus. I feel like maybe if you choose hold bonus after ball one it will keep giving you the option, at least it did in that one game. No idea how lucrative it was for me since I tilted my ball 3. ha. But that is yet another strategy I need to explore.

In what situation does choosing bonus X make sense?

Played one in league at a loud bar recently and couldn’t hear the your-time-is-running-down sound for multipliers. Watching the flashing arrows is much harder. I really should come up with a non-R2D2 strat.

I really should come up with a non-R2D2 strat.

Easiest one is the han strat mentioned. It’s easy.

Ball one skill shot take light Tatooine missions. Hit hoth and light that. Play hoth I. After that play hoth MB. After that light Endor via ramp shots. Then pick Tatoonies final mission. Hit one ramp then Death Star to complete. Then play Tatooine MB. After that work towards Endor MB or Death Star MB.

This is almost full proof to get 750-1.5 billion every single game.

Great strategy. Mine is a little different.

I play as Han, choose Light Tatooine mission skill shot. I like to get all my planets ready to go, save for Death Star to start.
Make the right horseshoe shots to light Hoth, then move the the left ramp to light Endor. Shoot Endor again and choose Tatooine 1. Complete that in two shots (ramp + DS) and then hit the left ramp again which I’ve already qualified and start Tatooine MB. I can usually finish this easily and play Victory MB and by then you should probably be stacking in Tie Fighter MB. After that your multiplier should be maxed out, so you can move the multiplier shot to the right horseshoe Hoth shot and play Hoth 1 at a huge multiplier. Should be an easy few hundred million. After that you have your Hoth MB ready to go. Play that (I don’t often finish it) and then work on your last Endor mode, which when planned out (right horseshoe, left ramp, right ramp, Death Star) is an easy pattern of safe ball returns. Now your Endor MB is ready to go. Sometime in all of these MBs flying around you should have hit the drop target bank enough and you should have Light Saber Duel ready. If you plan out your shots and move the multiplier the shots are pretty valuable. I never do this personally, but it can be lucrative.

I find this strategy can net you an easy few billion if not much higher.

playing Endor MB first and foregoing the use of my Endor add-a-ball. Then, go directly for DS MB with 2 add-a-balls.

So what are the key differences in point scoring between Endor and DS MB’s?

I forget what Endor MB scales off of, but it scales less frequently and at a much slower rate than Death Star MB (which is off of the targets, which you’ll get 2-4 of on every plunge). Death Star MB along with Hoth MB are the longer-playing MBs that have additional scaling, with DSMB being the heavier score hitter.

Endor MB is “shoot 3 shots and shoot the Death Star” - fast, quick, and mostly useless for scoring. This isn’t counting any Victory Multiballs, but even then a few Victory MB shots = 1 Death Star jackpot.

Great idea on saving the hoth I mode for after Tatooine MB so that your multipliers are as high as possible.

I like to play the R2D2 strat as outlined above. I use the ball save time to pound the 3-bank to build multipliers. Then pop a few drop targets to get the add-a-ball ready. I do all this before actively trying for any jackpots. Then shoot lit shots and always shoot the 3-bank when multipliers are about to run out. I use my add-a-ball only when draining down to one ball, like Martell on GOT. When the multipliers advance to where there is only one multiplied shot I put it on the Death Star for the big collect. I usually do Endor 2nd, followed by Hoth, then Tatooine last.

Moving the multiplier around during Boba Fet is the only way to make that mode worth anything. Typically worthless mode, I’ve had around 250-300M doing this.

Concerning multipliers, don’t forget that in comp mode, they max at 10x, then with the doubler max at 20x. So no 40x video mode to be had.