Throw on that Leia costume, and tune in!
6pm Central Twitch.tv/dead_flip 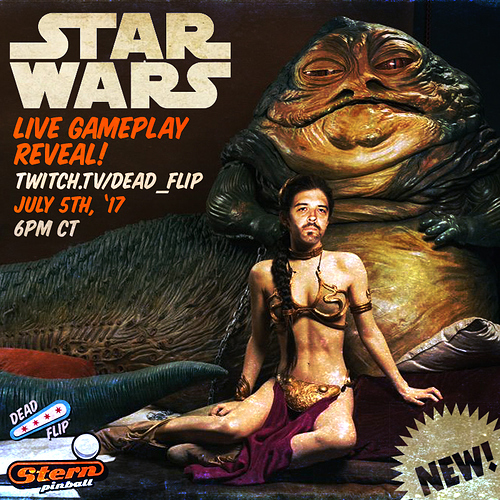 Can’t wait to play this tomorrow

The code you see tonight, from what I’m told, wont be available immediately.

I’ll have to compare revision numbers. Hopefully you’ll be able to show off that extra code goodness!

Show us how those multipliers work! Can’t wait!

Dammit Jack,
I can’t unsee that picture. Putting my thumb over the face works… kinda.

Game looks like tons of fun. Can’t wait to get my hands on one!

Gameplay seems fast and dynamic, that inside loop might be one of the fastest shots I’ve ever seen on a table and the returns from the ramps come screaming back to the flippers as well. I don’t quite get the tie fighter mode where you smash the center button 40 times. Is that fun or skillful? Why not put that mode on the spinner where each spin blows up a tie fighter. The moveable and switchable shot multiplier is a neat idea. Having a 40x shot at the ready will lead to some crazy supers. Speaking of which, holy score inflation on this game. I expect the GC’s to eventually sit around 50-100 billion once the dust settles and we find a way to exploit the insane multiplier shots. Josh putting up nearly 8 billion and nearly making the wizard mode on his 3rd time playing the game speaks volumes. I love how the stern folks were like, Yah, that’s enough Josh, lets not spoil the whole game on the first public stream.

The light show for the Boba Fett mode looks awesome, and they did a decent job with the sound effects and music treatments across the board. It’s too bad they couldn’t get Mark Hamill to perform some custom voice work for the game. He’s such a talented voice actor and would do a great job calling out the SUUUUUPER JACKPOTS! He’s probably SUUUUUPER expensive though as well.

It’s strange that stern chose to show off the pro first. The only interesting element from a design standpoint is their hyperspace ramp that loops in front of the flippers and up to the deathstar that is featured on the premium and LE’s. Maybe it’s not working as intended yet?

Thanks for the stream DEADFLIP!

Understand it is still beta code and has not been completely score balanced yet. Also to obtain the 40x there are many risky shots to take so it is by no means a gimmie. Once the multiplier times out the doubler also gets canceled so you then need to trudge back trough 5 sets of drops to re-activate it.

The stream was well done - thanks again Jack D. I liked Dwight giving the quick overview and his commentary throughout various players - I’ll have to rewatch a couple times, but a nice add. Jim, Josh and KME had different ways to blow up the score - nice to have all 3 x 7 billion scores to compare.

I wonder if Dwight has even reached adding 25% of the assets. Seems to me updates will have significant chunks of vid, voice and sound effects in each version. Also liked that Dwight already had 10 bugs on his list by the end of 2 hours.

I guess once you time out the doubler stacked with the 20x, it’s probably wise to try to re-light the doubler through a mystery award, rather than dropping the bank another 5 times.

What’s your highest game sitting at so far sk8ball?

Gameplay looks fun, and the screen looks great! Thanks for streaming it. Interesting rules/character dynamics.

Doesn’t really apply now since we have been working on tweaking the score imbalances. Once upon a time it was 40 bil but that was before a general scoring reduction on a recent update.

Status page freeze. Ah, finally. Only took 35 years to develope. I am actually not aware, if it has been used in games previously (JJP?). But an obvious way to work, the way I see it, that should have been custom since day one.

Incredible presentation on the screen (screens) I must say. Bat66 and Aerosmith was impressive as first games with the new display tech and its possibillities. But Star Wars is truly amazing.

Have a look at this section of the stream… https://youtu.be/Gap7MqXQKnY?t=6047

I love how the 20x multiplier potentially timing out encouraged Keith to jail break on the left flipper, putting all three balls out of control for a moment. The element of risk/reward associated with that shot is so well designed and the difficulty in re-lighting it is kind of genius. As an avid player, seeing Dwight Sullivan (the designer) iterate this type of feature from GOT (battering ram), to Ghostbusters (2x and 3x targets), to Star Wars is really fascinating. We’ve seen it evolve from a single risky shot on thrones, to a skill shot plunge + 2 risky shots on busters, to a bank of 3 targets with a set of 5 drops to relight another doubler on Star Wars. So cool!

As a side note, I fully expect to end up dreading that “…thunk-thunk-thunk-thunk…” sound effect that warns you your multipliers are timing out. In a game that’s full of hurry-ups and timed multipliers I think I’ll be channeling my inner Massenkoff instead of Gagno on this machine.