Massively updated the modes section with complete breakdown of shots and scoring values, as well as updated End of Ball Bonus to match version .88 code

What do the rainbow record inserts mean? I see them randomly light at the end of successful modes, and know they’re supposed to be “wild cards”, but don’t know which shots they correspond to. Do you have to collect these records?

After completing a mode the records should all light rainbow, and the next shot you hit will lock that one in as a shot x

What zach said - after a mode is done all shots flash rainbow and the first one you hit becomes a 3x shot multiplier for the ball, and also will collect that record and count toward your next mode. After you collect all 6 records they will all go back to blinking or pulsing, including the rainbow record, so it acts just like another record shot: you shoot it to collect a record. Only difference is it doesn’t count as one of the colors when determining which mode to start, and is always 3x shot value.

Is Blink-Blink-Solid a multiball? Asking for a friend . . .

In other news, the Stern PDF has been updated with the latest rules from .88 code! Huzzah!

I have a question that someone might be able to help with. On La Villa Strangiato the 3rd shot is “Top Left Lane”. Is that the Dead End on the Pro and the VUK on the Premium? Or is it something else I don’t understand. I’m assuming it isn’t supposed to be the inner loop or the orbit.

yup. It was written before we settled on the term Dead End (which can be used interchangeably for the target or VUK)

Thanks Ray! I appreciate the quick turnaround as I’m about to walk out the door to my local and play it.

Played some more Rush today and broke a billion for the first time. Headlong Flight is an excellent track, I’m very glad to have discovered it - props to the people who chose the music. However, I do have some possible bug fixes:

Otherwise, this game is shaping up to be a contender for one of my favorite recent Sterns thanks to the simplicity of its rules, and how the player can make them more complex if they want. Keep up the good work! 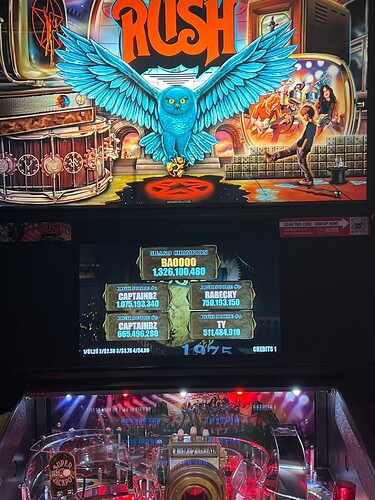 Updated some things to reflect .88 code and also added how you get Bonus X (which was missing apparently)

@raydaypinball @timballs Ive really enjoyed this risk reward play style. No crazy playfield multipliers, everything you get feels earned and rewarded for it. Modes are fun and let you choose the style of how you want to get points and not locking into “X mode is the best. Have to play it this way” Enjoying it a lot more than I thought I would and so far feels pretty balanced competitive wise but still fun for anyone to play. Great job to both of you, I look forward to the future of this game.

Thanks for all this, game is super fun lots of ways to approach it. I just finished my morning sesh and I had fly by night MB barf a couple times. Once that required a power cycle and one lockup and then the game reset itself. Both times it seemed to be when ball save lane was activated. That was the frozen animation at least after it went dark. I had one other time in headlong flight in original code where all the music cut out and it was just sound effects. Came back after end of ball.

I appreciate the reports, but this isn’t the best place for it, any time someone has a crash or bug please send an email to bug.report@sternpinball.com. It helps us aggregate it so we can triage and keep track of things happening out there. Many bugs have also been fixed in unreleased code so it doesn’t make sense to clutter up this thread. Thanks!

On topic for stratagey, besides La Villa(since the combos multiply the value) in theory there’s no higher scoring mode than the other that I’ve noticed? Seems the value and amount of shots are about equal in payout. Some may be easier to achieve like doing Limelight instead of Spirit of Radio. Unless I’m missing something here?

They all sort of have their trade offs and reward different things - Tom Sawyer for example doesn’t have any other way to play it then “hit the shots” and starts with the four hardest shots in the game but your reward is it has a much higher per-shot value. You mentioned la Villa, it’s the hardest to beat and hardest to play but has the highest potential upside. Working man is the opposite - easiest to beat, everything lit, but pretty flat scoring potential.

Winning the mode by scoring all four hurry-ups will multiply the hurry-up values for the next round by 2 million.

And you thought Led Zeppelin had crazy multipliers!

Could someone explain the Instrument Bonus? Bonus lit on shots for collecting (multiple/sets of) instruments? This is different than, say, the 2x spinner value after activating the guitar, right?