I’m working on cleaning up a Big Game and I’m curious how the lane divider area is supposed to be set up. There are 4 holes at the inlane/outlane divider and the two bottom ones are obviously for the lane guides but what about the two top ones? This one came with a mini post on one side only and an empty hole on the other that doesn’t look like it’s been used in decades as the ball wear kinda goes around it. The flyer shows an interesting bracket of some sort that mounted to the playfield rails but most other pics I can find have the holes empty or there’s nails in both. I don’t want to put nails as they’re just going to bend and be pretty useless and mini posts seems like it’ll make things a lot easier. 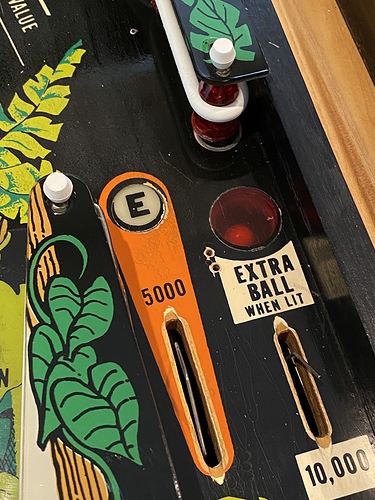 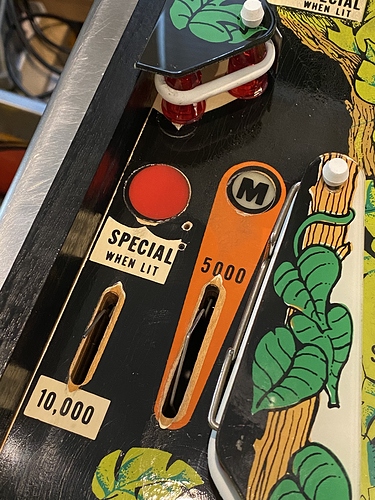 Mine had nails. I just took them out and left them out. Also moved the posts to the highest position to open the outlanes more.

Some games even had these weird ball guides. Maybe that has something to do with the extra holes too. 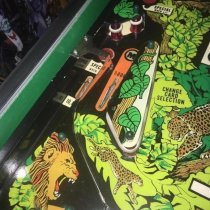 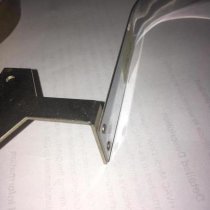 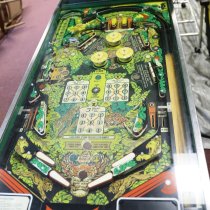 Those ball guides are pictured on the flyer, they look interesting but I bet they were costed out. Mine would have not had them as there are no holes in the rails for them.

The top hole on each side is for a protective pin/nail/thin rod above and separate from the return lane guide. You can see them on Stern’s Ali here. It is a good idea to include them to protect the return lane guide since there’s no rubbered (or not) post above the divider to do that job. I’ve seen games where the top of the return guide eventually started to sink into the playfield from repeated hits by the ball when this rod was absent. The rod needs to be well-secured. 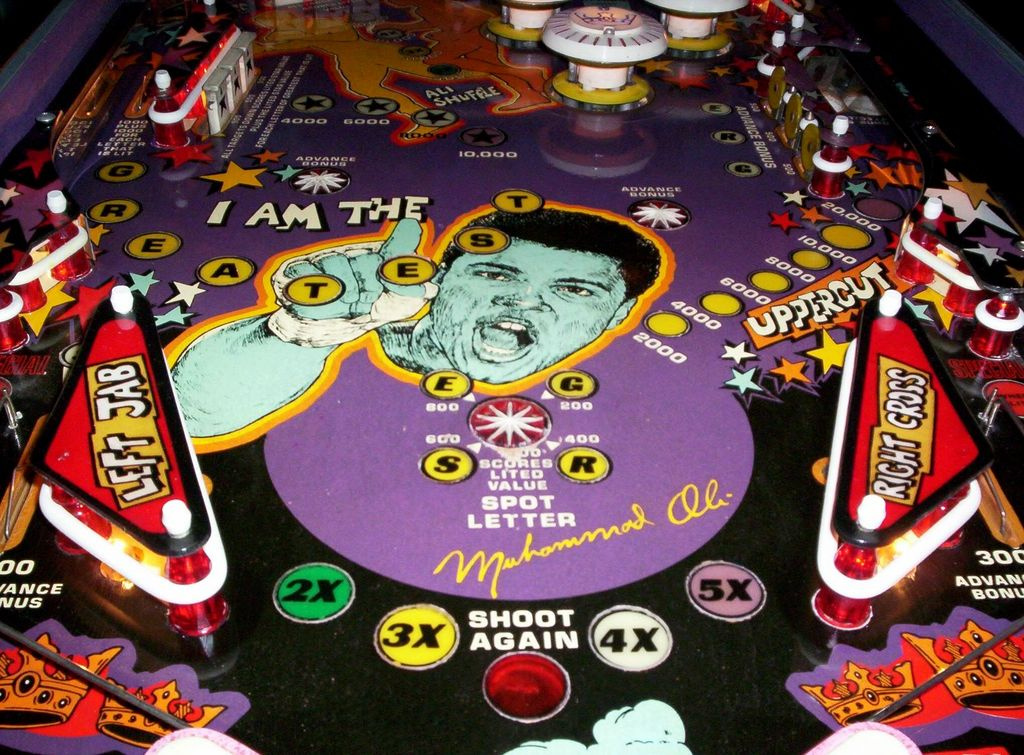 Yep. That’s how mine looked and just took them out to make it a tad more difficult and I didn’t see the point of them.

Now the end down by the flipper? That gets pounded in for sure.

This is a fun game… way more challenging than the 4 flipper bottom would lead one to believe.

Anyone have problems with the saucer kickout being too strong? It uses a really low power coil already (~34 ohms) and yet it still launches the ball into the air, often hitting the one way gate and rolling back into the saucer. At that point it re-kicks too quickly (before the ball fully comes to rest) and will take a few tries to make it back to the playfield, and more often not through the top lanes. I’ve cleaned up and aligned the mech as well as I can, and tried stiffening the spring a bit, but this made no discernible difference.

Is the arm of the lockout mech worn down? If it doesn’t have a point to it, I could see it launching up instead of out.

Good question… I’ve seen worn ones and this one doesn’t look like that to me.

Here’s a vid of the “action” 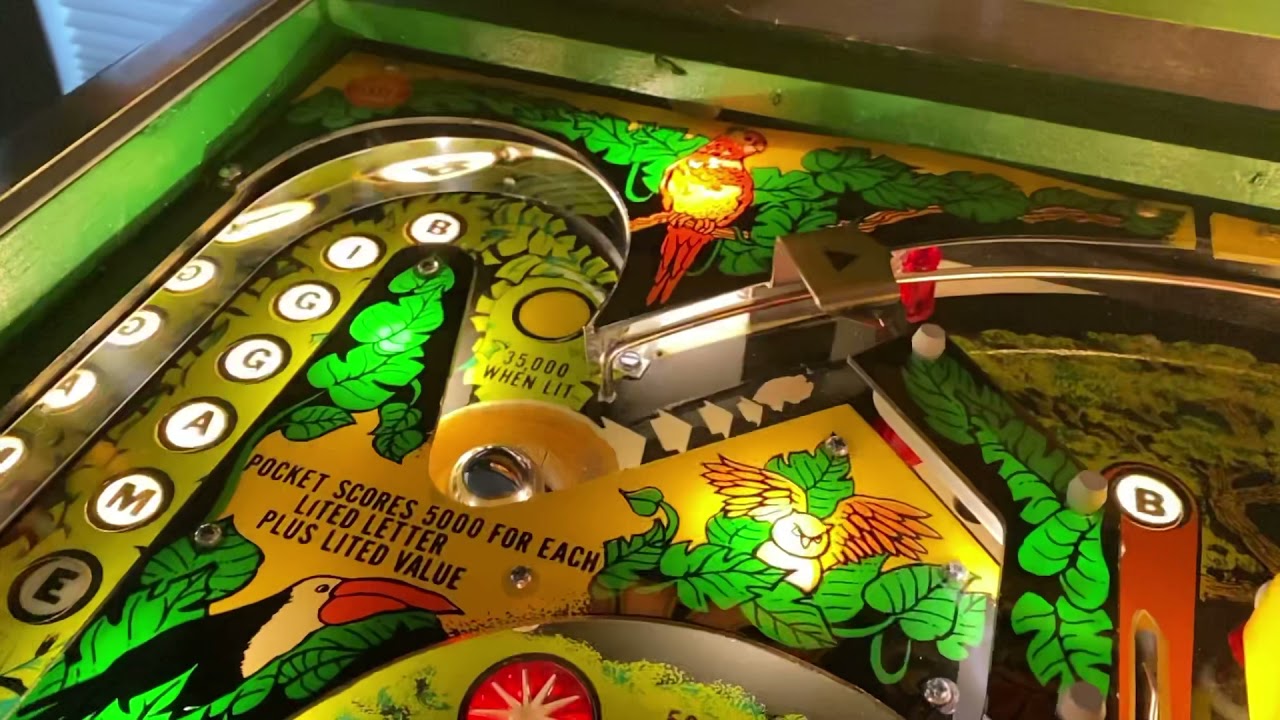 Looks like it shooting right, not too high. Try adjusting the arm. Extend it all the way out and use the slot in the playfield to bend the arm one way or the other.

It does go right that time but it’s mostly inconsistent so attempting to move it another way hasn’t helped much (first thing I tried). Basically, what I’m trying to sort out is should it be kicking out so hard and high normally?

Mine doesn’t seem to launch that far. Maybe tighten up the spring even more?

I’ll have to find a different spring probably, if I stretch this one any more I’m probably going to ruin it. Thanks for the second set of eyes.

I wouldn’t stretch it, cut some of the rings off maybe.

Anyone have problems with the saucer kickout being too strong?

I corrected this behavior on my Big Game by opening the saucer eject switch gap as wide as possible, while still allowing it to close when the ball settles in the saucer.

As the coil energizes to eject the ball, opening the switch earlier should rob the kickout of excess power and deliver the ball smoothly through the gate to the top lanes.

The activation switch on solid state machines for saucers doesn’t have any effect on the pulse applied to the coil - it’s always the same.

Asjusting the switch wider helps a little with the failed first ejects. When the ball goes in the saucer the first time it waits for the spinner to stop scoring, then counts up the BIGGAME letters then fires the eject coil, so it has more then enough time to come to a complete rest. If that first eject fails, it immediately fires the ball back out as soon as the switch closes so the ball almost never settles in the saucer fully, resulting in rather wild kickouts. Unfortunately I’ve got my switch adjusted this way already. If I adjust it any further the ball pushes the plastic saucer insert too far down the leaf blade and it gets stuck closed.

I thought of something else I might try for this last night… if it works I’ll post it.

the best adjustment i found on my 2 different BG was the stiffness of the spring. lots of try and error, and very different from a machine to the other even…

Make sure you bring yours back to Cle pin!