While I was thinking about guides … it occurred to me that I haven’t seen any guide or set of rules for Stall Ball, so I thought I’d take a crack at it. Consider this a first draft open to improvement. [Someone may want to Wiki this.] If there is such a handbook already, someone might want to put it somewhere visible.

Get [at least] one ball “stalled” in a saucer, scoop, lock or other game feature that briefly holds the ball before releasing it. The next person in line then immediately assumes responsibility for the ball in play. Drain before stalling and you are eliminated from that run.

All players are assigned to a queue for a game [there may be more than one game used, depending on player count]. The first player up starts the game and tries to stall the ball. If successful, their turn is done and they move to the end of the queue. The next player in the queue then immediately assumes control of the ball in play as it is returned from the “stall” feature and likewise tries to stall the ball again in either the same or any other stall feature. Play continues down the line from player to player until the ball is drained. The player who drained before stalling the ball is eliminated from that run. Play then resumes with the next player in the queue beginning a new ball. The last player standing wins that run.

Without playoff phase: rank players by most runs won; tiebreaker can be earliest win or can be played off as a new run between just the tied players.

With playoff phase: run winners are removed from subsequent runs and then have a separate “run winners only” competition after all qualifying runs are complete.

Stallball can be done as a one-player game or a multi-player game. It is recommended to use the maximum number of players available on each machine to minimize the need to restart games. When a multi-player game is used, the player stepping up after someone drains will be playing whichever player number is next up on the machine.

The optimal maximum number of players per machine is usually 13. Observe that if you start a 4-player game, assuming 3 balls per player, that’s 12 drains or outs, leaving one player standing, without having to restart the machine as is necessary with more than 13 players.

Machines used should have minimum of 3 stall locations.

Ball savers should be turned off to not provide an advantage to players plunging a fresh ball. If ball savers cannot be turned off, consider treating the recovery of a ball by a ball saver as a drain that knocks the player out of that run.

If multiball is started, stalling any ball counts as a stall that moves play to the next person in line. Balls drained [other than the last one] during multiball do not impact player turn one way or the other.

If a ball “should” stall but fails to, what then? For scoops, it either falls into the scoop or it doesn’t, so it should not be an issue. For saucers, a ball is not counted as stalled unless it does actually settle in the saucer and score. For locks, assume the ball is held; if it fails to lock for any reason, play on without player change. [This may require future refinement.]

Stuck balls: do NOT count as stalls under most circumstances.

Option: if a player can trap a ball UNDER an upper [non-drain-below] flipper, does that count as a stall?

Ideally, have an assistant TD standing next to each machine to declare when stall is achieved and thus the next player should take over. As an alternative, have players who won previous runs and are not in the current run but eligible for the playoff phase stand in as officials. Absent either, use the player honor system.

Tilt throughs are not a problem per se, but if one occurred in run 1, it would foul up finishing by end of a standard 4-player game if you had the maximum of 13 players in the group.

The few times I’ve played this, ball saves still counted as a drain and the next player just had to step up quick as the chase ball was now their problem. Maybe not the best official way to do it, I guess. If stall-ball is going to be official-ized.

Get [at least] one ball “stalled” in a saucer, scoop, lock or other game feature that briefly holds the ball before releasing it.

These seem in conflict. How long must the ball be “briefly” held before it counts as a stall? I would think in both cases here, the ball has disappeared from the playfield, makes its way to the VUK, game registers that it is there, and kicks it. Does a stall need to come with some sort of audio or visual callout?

Definitely needs a proctor or something like that to make the determination when a ball is stalled or not. But sounds fast and fun!

If manga-save dains then next player is not out / player who risked manga-save is out.

Games with auto magna-save??? that will ball save on fail?

TDs can tape sheets to game backglasses enumerating valid stalls for that particular machine, along with anything that would not be considered a stall. If players discover unlisted stalls, they can be added to the sheet before the next set of players starts up, but only stalls currently listed count for the game in progress.

I’ve never played any codified stall ball game, and only played on Medieval Madness, World Cup Soccer and LoTR, but it’s always been more or less a “house rules” kind of competition with more or less just a communal agreement of what a “stall” is. I don’t interpret it as needing callouts. If the ball “stops” because of a game feature that should stop its movement, that’s a stall, whether called out or not. So scoops that aren’t lit should count, IMO. This can probably be argued, but I think it should just be agreed to on site since stall ball is often a more-or-less for fun (or dollars) format (this idea of counting “runs” and “outs” is an interesting alternative, though).

I wouldn’t think magna save would count as a stall (and I wouldn’t try for it) though I guess if it was a successful save it would fulfill my above “stopped” requirement.

We’ve been running it here locally as a pre-tournament warmup. A couple of the house rules we observe, and perhaps suggestions of ways to setup games for stall ball:

on 4 some games have eject / scoop kick out balls savers that may need an game by game ruling
also what about stuff like the raptor pit?

We’ve yet to officially use it on such games (for example, the GB right scoop kickout). Considering that it’s meant to be a quick warmup, my gut would incline toward ruling that a drain. But if it’s known to be problematic enough that it is causing drains, then maybe it needs to be looked at anyway.

also what about valid play field?

We play it often. Usually $1 or $5 a person. After our Flip Frenzy Tournament on Saturday we played it on Iron Maiden, Aerosmith Premium, Fish Tales and Demo man. We include ramps as a stall, makes for a much more exciting stall ball game.

It’s probably easier in the spirit of the format to just declare that “a drain is a drain”.

I am planning a “staged” Stall Ball event. I am thinking of running it as follows. For my example I am assuming 24 players.

Sounds interesting, let us know how it goes and maybe what the ending stats are, e.g. how many people at which machine how soon, total time needed.

I think you’re over complicating things.

1 machine, 1 queue. If you Lock/Stall a ball you move to the back of the queue, if you drain you’re out. Simple. With random prizes being given out during it. Maybe every 4th person knocked out?
The queue has been right the way around the hall on many occasions with almost everyone taking part.

I’m sure he can post a clip of it.

thanks Wayne and agree KISS applies!

Stall Ball for me is a bit of a carnival type form of pinball with the rules as simple as possible. The referee’s job is to put you off

Here is a video (much beer had been consumed by the time this went live :D) 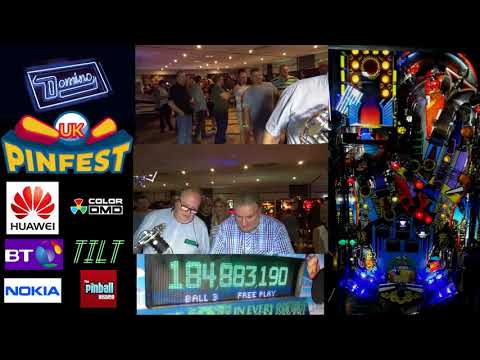 I think having a serious set of rules for stall ball seems a bit challenging!

We’ve done the 1 machine stall ball in the Oklahoma area for at least 2-3 years now. I’m all for trying something new at this point. I think the idea you put out is simple enough to follow and a big enough variant that it’s familiar but not the exact same. In theory it’s basically combining King of the Hill and Stall Ball, and removing the endless line element to keep things moving along, all of which sounds like a fun time to me.