Invented this format for tonight’s event at Logan Arcade. I think it’s got promise, but I’d appreciate feedback!

8 players showed up tonight, which was very convenient for the format. Players were matched up randomly to play split flipper games against other pairs. After each game, they pick a new partner. You can’t repeat partners until you’ve worked your way through everyone; for this size group I was thinking that working through everyone twice would provide a good-length event. Players report results to me, and I’m keeping track of individual results.

WHAT I NEED: it’s easy enough for people to find new partners every round, but I need a good way to match up the teams each round. It would be best if everyone faced opponents the same or similar amount of times. I feel like this is the biggest weakness right now; there’s probably a web tool that would help with this weird round-robin-within-a-round-robin, but I don’t even know what to search for.

Picking tables: The initial tables were picked randomly from a list of favorites and new arrivals. I’m asking people to not repeat tables, but that’s a luxury I have with this place’s big collection. I’m having teams flip a coin with the winner deciding, for now. Randomization would also work. To keep with the theme, I’d love to figure out a way to make people rotate between the three pinball rooms here, but that’s probably a bit too much complexity for the sake of theme.

Scoring: I don’t know how to break ties, if they happen. Ideally, computing strength of schedule will be moot, because everyone should play everyone else an equal number of times.

SIDE NOTE: anyone ever experience the thing where split flipper scores better than either player’s individual results? There was just a game on Ghostbusters LE where one of the split flipper teams got the #3 high score!

WHAT I NEED: it’s easy enough for people to find new partners every round, but I need a good way to match up the teams each round. It would be best if everyone faced opponents the same or similar amount of times. I feel like this is the biggest weakness right now; there’s probably a web tool that would help with this weird round-robin-within-a-round-robin, but I don’t even know what to search for.

If you don’t let players pick their own partners and no one leaves early (or arrives late) it’s doable with a bit of grunt work. If one of those conditions can’t be met… good luck

Grumpy computer voice aside I think this sounds like a super fun format. I’m biased because split flipper is super fun of course

Yeah, when I run this again some sort of computer aid will be helpful. If it’s a nice round 8 people it shouldn’t be too hard to whip up a matrix evenly assigning partners and opponents, but if there’s more people, and some have to sit out each round, that’s going to complicate things.

We finished, and people really liked it… especially the one-handed tiebreakers! But yeah, next time I run this format it’ll be with more preparation than “coming up with the format in the shower half an hour before going to the arcade” 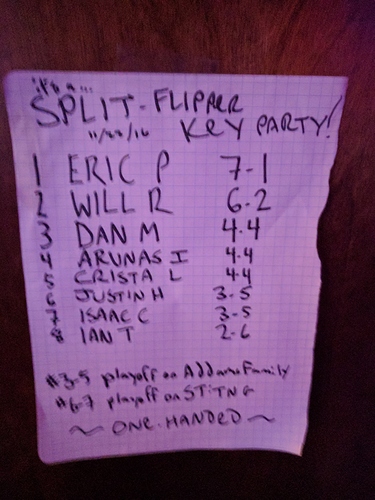 UPDATE: running this again tonight at Logan Arcade. Despite the above protestations, I have not done any preparation; indeed, I kinda forgot this ever happened. Wish me luck!

What if you did round robin and instead of those people playing each other, they are teammates and they play against the next pair?

Could do this with matchplay so that arenas are balanced too. Possibly have to do a bit of rearranging opponents as it’s not guaranteed that adjacent pairs haven’t played before.

I agree this seems very fun for smaller turnouts.

Oh, so people stick with the same partner, but do a round robin with all the other pairs? That would work real well but I think I’d rather do that as A Big Thing, not as one of our Tuesday socials

The only issue I see here is that if say 16-24 show up, by the time you play with every person, that’s 15-23 games. That takes a while. 15 min games is what you’re probably looking at so if 24 people come, 23 games is like 6 hours. Just a thought. I tried a double round robin once with 10 people and they wanted to kill me after like 10 rounds. Haha

Oh, definitely. 8 is a good number for the format, as everyone plays 7 games. We usually shoot for a 2.5 hour session; 6 4-player games on a league night, 9 on formats like Pin-golf where you don’t necessarily play full games.