Everyone knows that ripping spinners is fun but, whats the fun of ripping a spinner that’s not dialed?!?! My results seem to vary on every spinner I try to dial in. My Mars Trek spinners went from “meh” to spinning into the next players ball. My Barracora spinner didn’t seem to change much even though I used the same process.

What I usually do is take the frame and the spinner out of the game. Bend the frame so the two holes where the spinner arms sit are aligned across from each other and the frame itself is square. I also bend the spinner arms so they follow the same center line as the spinner and both arms are bent to generally the same height. Then, I take steel wool and or polishing cotton to the arms of the spinner and the hook that goes under the PF to get any rust, burrs, loose paint off the arms while making the surfaces smooth. Then, I take the plastic spacers that hold the hook in place and clean them. Finally, I add a small amount of superlube to the arms, inside of the hook, and the sides of the plastic spacers that face the hook and reassemble.

When it comes to the leaf switch under the table, I’m not really sure what the best option is. I generally ignore it. Maybe it could act as a spring to keep the spinner turning longer? Maybe it should have as little tension as possible? I thought maybe it would be fun to find out what other people do to get their spinners dialed.

Generally you want there to be as little tension as possible. The more tension there is, the harder the spinner has to work to keep spinnin’. I used exactly the process you described on my Meteor, plus adjusting the switch so that its just barely touches. Works great, very satisfyingly lengthy spin now, which is really great on Meteor!

Just dialed my Meteor spinner that I bought yesterday! So good. @ClevelandPinball, roughly how many points do you get from a full shot to your maxed spinner?

Thanks for this! I will give it a try on the Future Spa I picked up last week. Both spinners are struggling to spin more than a few times each.

I use Teflon lube at friction points. Pinrestore and Marco sell it in a pen applicator. I used it on my Stars and the spinners fly.

I like Brain lube which is a product made for YoYo’s but some pinball supply houses have it. It is a very thin, light oil that comes in a very precise applicator tube. Not sure of the chemical makeup. As with most lubes, if you can see a drop of it after application you may have used too much. I only use it on the “axles”

Future Spa is a tough one to really get cranking since the spinner shots are out wide and past the flippers sweet spot but you should be able to get it near the 20k/shot range with a good alignment and oiling.

Agree that you want as little resistance as possible on the leaf switch. Some newer spinners use microswitches–tweak the blade so it barely registers on the downstroke. Also, if the blade has more than one pivot points, move it to the pivot furthest from the switch button to reduce resistance. Mars Trek has these cool, thin and long leaf switch blades that are very flexible and provide very little resistance. Those spinners FLY!

What slows down modern spinners the most is their heavy weight and off-center mount. The wire mount is off-center so the spinner stays upright when at rest (the ball will go under a horizontal spinner!) Any tweaking so the support wire is nearly horizontal (bringing the spinner’s center of mass up close to the level of the support points) will reduce the spinning resistance. 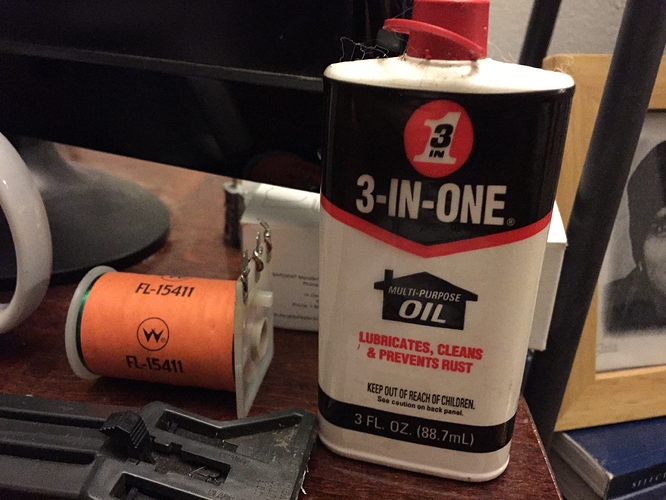 I recommend Tri-Flow which has a Teflon additive. I put one drop on each axle and then blot up any excess with a dry towel.

Now I can “even out” my Williams Grand Prix. Thanks TiltForums!

All you’ll ever need imo. One drop on the pivot points and switch arm and it will rip for thousands of plays.

GOT’s spinner is a serious strategy on my game. 500 million a spin at level 4 and 5x playfield.

GOT’s spinner is a serious strategy on my game. 500 million a spin at level 4

Can you elaborate a bit? I’m not that familiar with GoT, how do you get spinner levels?

Each time you hit the drop bank down, the level increases. Takes 5-6 sets to get to level 4, but the value will continue to increase if you hit more sets down. The value basically resets back to base value each ball though, so don’t drain! Only the pf multiplier affects the spinner, not the combo multipliers.

Can you increase during multiball?

Yep. But not during certain modes like Baratheon or targaryean. So if I have a good first ball and get to HOTK and I know that spinner is spinning good, I just hit drops and battering ram and get that stuff as valuable as possible when I drain out of it and go to town.