Should you play in an event if you can't stay for all of finals?

Folks, I have a mild ethical conundrum, and am looking for some perspectives.

On the weekend of Free Play Florida, I am scheduled to give a speech at a different Orlando hotel at 3pm eastern the Sunday of FPF. Assume for these discussion purposes I would need to leave no later than 2pm.

The “main” HERB event at FPF has finals starting at 9am eastern Sunday, I believe taking 16 (24?) players into elimination rounds. Let’s assume 2.5 hours for an elimination round with four four player games.

Is it ethical and fair to my fellow competitors to enter and compete in the main event if I can’t play in the last group of 4, and would have to withdraw at that point?

Here are what I think the options are:

Are there any options I’m missing? Any advice from TDs about how they’d prefer the situation to be handled? Advice from my fellow competitors? Anyone with a philosophy degree wish to cite Kant’s categorical imperative?

Adam, I would say play as far as you can get. I think it might have been this same tourney last year that Lyman had to duck out in the middle of the final four. I know that’s an extreme case. I think you will have zero problem making the cut and just hope you get knocked out before you have to leave. 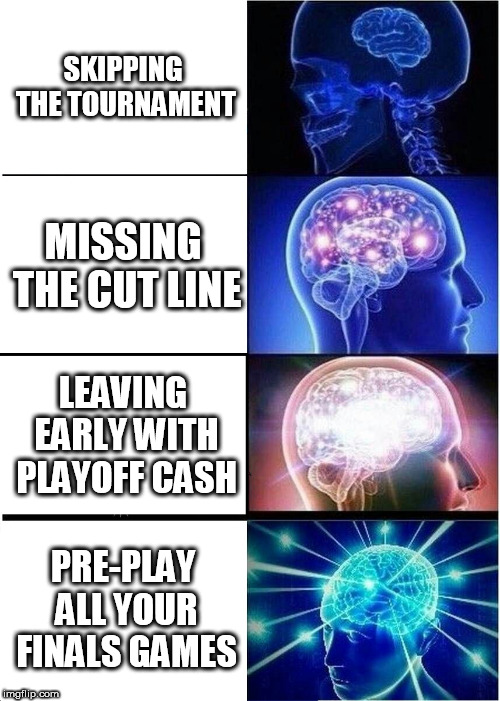 Play on. People have dropped out before due to time constraints at the Nationals, Chicago Expo and at least two others I went to but can’t recall which.

See you in the Semis.

I will be at this tournament and most likely you will qualify higher than me. I am usually one of those “bubble” people at circuit events. I would urge you to play as far as you can. There would be no hard feelings from me if you qualify higher than me and that forces me to miss the finals – you beat me and deserve to be ahead of me, even if you have to leave during the final match.

I agree with the consensus… play it out as much as you can, scoop up as much cash and WPPR’s as you can. And hope that things run fast and maybe you get to fully play it out and win the whole thing.

Come! I promise to pick the fastest playing games if I’m your bus driver

Josh doesn’t drive the bus, he drives for Crazy Taxi.

Happens in our league and Pinabler Tour (selfie) finals sometimes. We have players that have to work in the early evening, many times at the location of finals. Sometimes they make a run towards finals and they’ve had to bail out, other times made it work between playing and getting some work done.

My opinion is I’d rather have the players participating. They earned the spot by advancing through earlier rounds and qualifying, so it’s their spot to forfeit or find a way to keep playing.

Agree with most, play on!

If a player that has qualified for finals bails out before the finals start, is it OK to bump up the highest qualifier that missed out?

I once finished second to a guy that was at the airport when the finals ended. He made the finals, but knew he didn’t have enough time, so he told the TD. The TD asked us other three in the finals if he could play his games before we played. No games had lock stealing, so we said sure. He played his games and left, then we played four 3 players games. After it was over, he won. I think someone called him at the airport and told him.

He won a 4 Square for his efforts. Not sure if that ever made the 1000+ mile trip to his house. It certainly wasn’t on his flight that afternoon. The rest of us got paid, so everyone was happy.

Worth noting that the player is one of those people that you always enjoy seeing and competing with at an event. No idea if this played a part in how it went down (and don’t care), but it certainly didn’t hurt. If you think/ know you might disrupt an event somehow, make sure you are in good standing within that community. Then you too might be a winner at the airport.

I know I wouldn’t allow it in my major tournaments as it messes up the direct play component and don’t think it is fair to the other three competitors. Certainly a nice way for organizers to at least allow the person to play and get a final result for everyone. I am more on the side to rule in fairness for all instead of ruling on whether a person is a nice guy and we should change the rules to allow him/her to play a different way.

And hope that things run fast and maybe you get to fully play it out and win the whole thing.

I’m getting some games ready for the FPF tournament. Dan the tournament director is standing right here in my living room at this very moment. Dan says: Heck yeah come down and play. If you have to leave, you still get points and payout for the position you finished in. Also, there is a great Classics tournament that ends Saturday night. We would love to have you here!

I routinely play in events that I’m running, knowing that I will drop out during finals because I need that time to make sure the event finishes smoothly.

Any player may drop out at any time. I don’t think it’s generally unfair to anyone but like many actions you could imagine corner cases where you could argue it could be abused.

Play. If you earn a spot and have to leave, that is a shame, but it still does not change the fact that you put forth the effort to earn a spot. You should be entitled to the WPPR points you earned.

As an aside (since this relates to FPF) the show organizers and tournament directors work very hard each year to put on a quality event. Thanks to everyone who participates and supports competitive pinball in Florida.

Looking forward to the event in a couple weeks.

If a player that has qualified for finals bails out before the finals start, is it OK to bump up the highest qualifier that missed out?

Yes, this is commonly done. I think it’s a good idea to include details about how absences for the finals will be dealt with in a tournament’s rules.

Looks like this WCS marathon was the end of the line.

Did you get to finish this game, or was your measly 1.2B 4th place due to leaving early?