Neverland, the primary location in Tokyo for pinball, recently changed out their games, and has put a 1974 (actual Japanese ) Sega Robin Hood on location for the next 3-4 months. As this game is rare as heck, I thought I might as well write it up and document it since it’s actually pretty interesting. 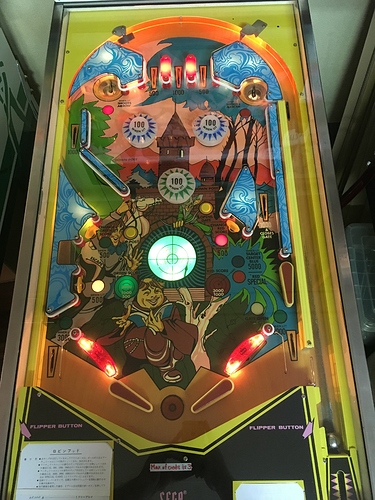 The primary feature in the game is the arrow and target in the centre: the arrow swings really slowly back and forth across the target. The lit saucer at the top of the playfield scores points according to the colour and position of the target: lit green, it scores 3k/1k/500, while red it scores SPECIAL/3K/1K. The lit colour can be changed by shooting the appropriate target in the lower playfield, while the lit saucer is changed by the top lanes (in a complicated way) as well as a few other switches.

There is also an up-post between the flippers which is raised by the button rollover, and lowered by either of the marked rubbers in the upper playfield. This is not on a timer, so you get some zipper-flipper-like controlled play while you get set up for your next shot.

The last major feature is the ‘escape’ lane on the left, which leads to a kicker. Upon registering, the left top saucer is lit, and the kicker kicks the ball into it (mostly) for the lit value.

The centre pop is lit by the centre top-lane rollover, while the side ones are lit by (I believe) the 500-point colour-changing targets in the lower playfield. All pops are unlit when making a lit saucer.

There is no bonus, no match, and no extra ball.

This game is surprisingly fun. First priority is getting the post up, after which you can drop-catch with impunity into the post. From a trap on the lower-left flipper, the top-right saucer is very makable, and the feed back down can be dropped into the middle with a drop-catch on the UR flipper. Just holding the flipper up tends to put the ball into the, um, “slingshots”, which is doom, while no-flip puts the ball into the outlane. 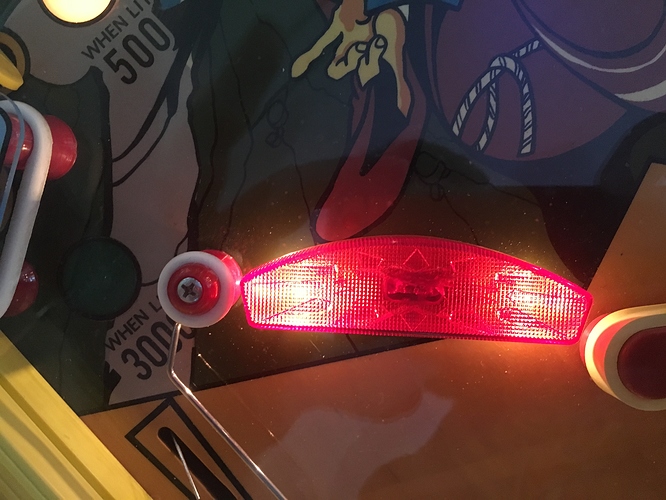 IMG_1485.JPG4032×3024 2.21 MB
An aside about the “slingshots” (see photo): they’re hard plastic, mounted on a switch/kicker combination. You can trap up against the corner of them, but an errant tap-pass will absolutely trigger them. I have no idea what the proper name for such a thing is.

The left saucer up top is much harder to make. Both the escape lane and the orbit are only really makable from the UR flipper, and it kicks the ball out straight into the ‘lower post’ switch, so you get your net taken away, too. This leaves you with not a whole ton of things to shoot from the lower right flipper other than the ‘up post’ button. Fortunately, with the post up you can easily tap pass from one flipper to the other.

In tournament play, you want to get green lit on the target, the upper right saucer lit, and then just grind. Playing for coin drop the red is more valuable: special is pretty great, and you can often get a few.

Compared to other EM manufactuerers of the era, it feels a lot more ‘modern’: maybe due to the lack of drops or spinner, but also in the flipper feel, which play like tap-pass-era Ballys. 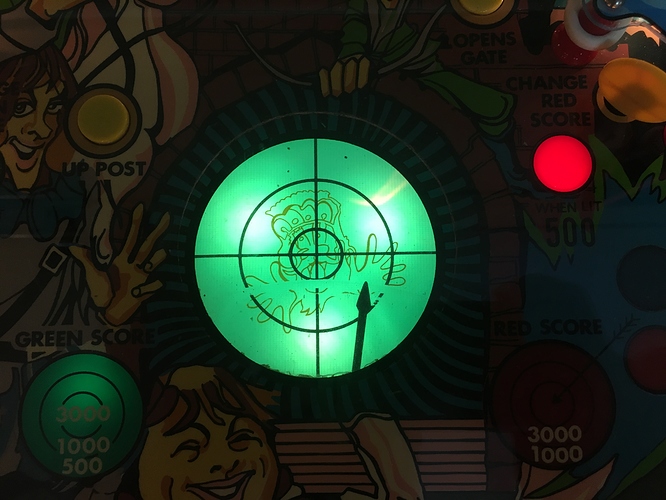 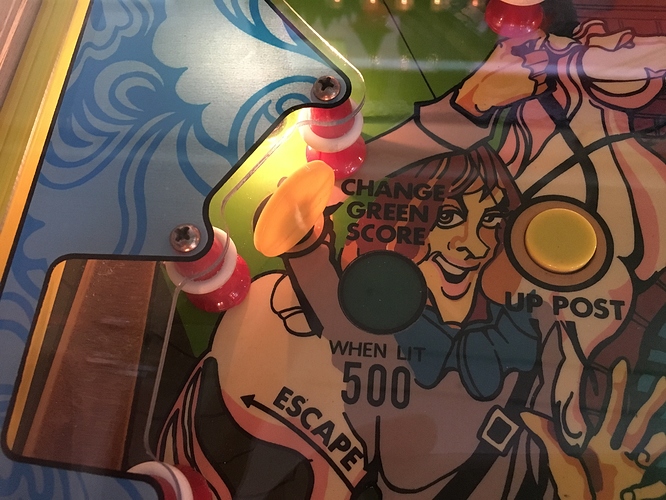 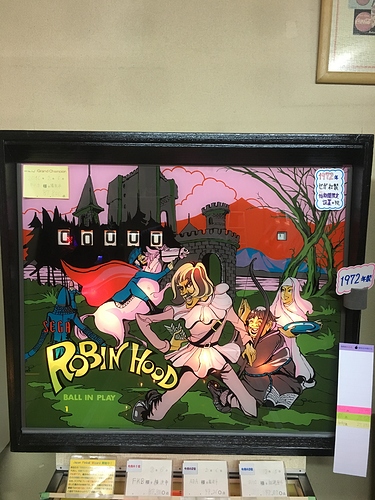 That is some awesome art for the era Very cool for them to put that out there just how rare is it?

Here’s a good article from a few years ago about them:

I was back at Neverland on Saturday for a tournament, and asked about the game. It seems that the Japanese community neither knows how many were made, nor how many survive today. This one is in the hands of a collector, and was sent into Neverland’s parent company for restoration. As part-payment for the restoration, the collector agreed to let them put it on route for a couple months.

They seem to have a bunch of rarities and odd-ball games on hand, I’m not sure why. They currently have an EM Mata Hari and a plastic-playfield prototype SS Mata Hari in the arcade, too, both of which are low production (170/20-ish made).