Tune into Twitch.tv/dead_flip tomorrow (Friday 15th) around 5PM CST to see Jack Danger hanging out with the Spooky Pinball crew to go over their newest creation.

Watch as we play LIVE, and learn how to play along with Jack as he asks what the hell to do on the game. 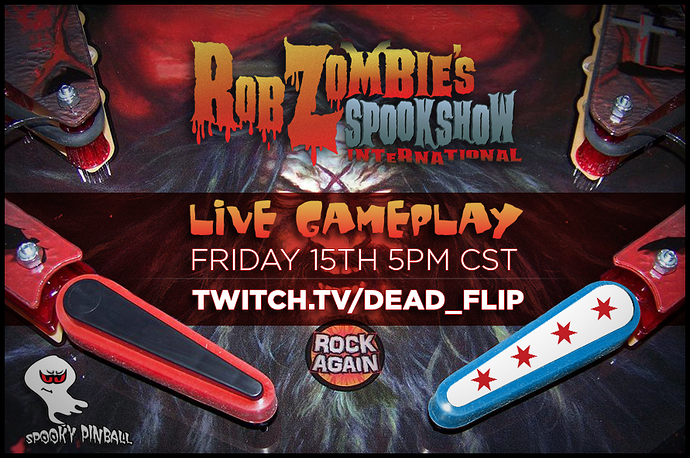 They’re PBL’s new PerfectPlay Silicone Flipper Rubber. Should be similar to Titans, but I’d love to see a head-to-head review.

What the rubbers are made of aside, I hope you guy will at least have the same colored rubbers on the game when you broadcast. Using new rubbers is one thing, but using two different colored rubbers AND using two different colored bats is bastardizing the game before you even launch a ball. Plus, one of the bats is the same color as the playfield, black. Black rubbers are fine, but black bats are never a good idea IMO, no matter what color the playfield is. Makes it that much harder to line up a shot with a fast moving ball.

If you guys don’t know how to play it yet, why make it harder before you even launch a ball? A player can count on symmetry with the flippers on a factory game. Everything else on the playfield is open season, but the flippers are always the same on both sides. Please don’t encourage people to make their game harder before it even arrives at their house.

Otherwise, good luck with the broadcast. I’ll definitely take a look if I’m not doing anything.

Agree with your point on black flipper bats though.

Jeez, what is this, pinside?!

The outlanes look dead mean on this game. And I’d say the third slingshot on the lower part of the playfield will add to that party.

Nice to see a fresh approach to pinball design. And I am happy that Charlie has found a fan base for this. Hope to play it one day and see for myself.